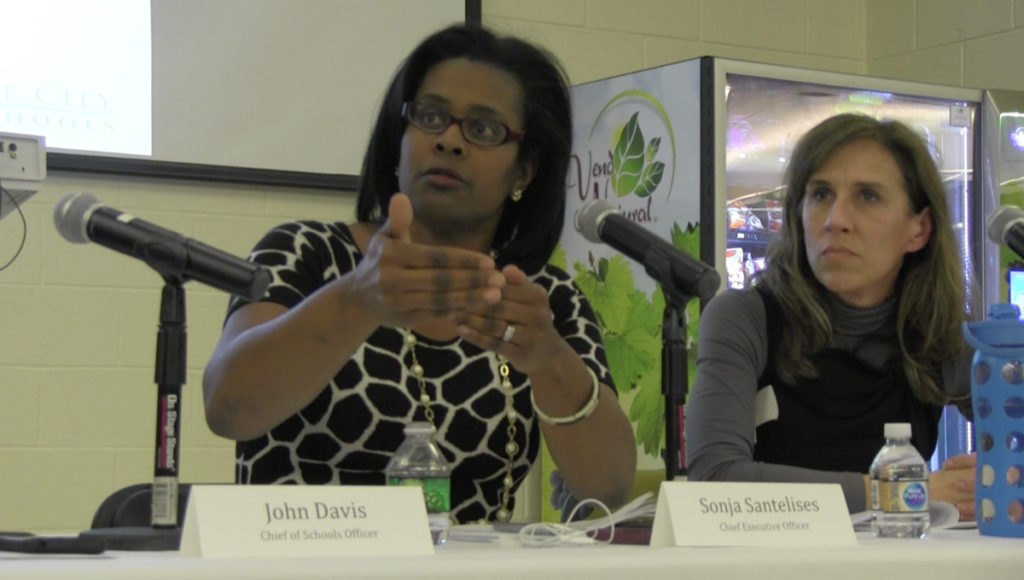 DONALD RHEUBOTTOM: For quite a long time. For quite a long time, you have already failed. You failed. Everything that we’re sitting here listening to now is the same old re-gift wrapped explanation to what is wrong. We give more money, we get more money per student than almost anybody in the country. But then we don’t even have a single school that’s proficient. Not one.

SONJA SANTELISES: We now have protocols in place that we didn’t have before so that when buildings are too hot, we met with the Baltimore Teachers Union, we worked with them. We worked with other teachers who had actually emailed directly. We had some parents who did that. And so, one of our big lessons was having kind of a consistent policy that said this is the target for every young person in Baltimore City. Right? That when you look deeply at the funding, not just the surface, not just a surface kind of knee jerk we are funded higher than any other school district in the country, which by the way is not true, just so you know. That’s not accurate information. But when you look more deeply, what you see is that there are outside organizations that have said for a long time that Baltimore City is not funded at the level that it should be.

SPEAKER: We better recognize who is really to blame for this funding crisis. We better recognize when Governor Hogan says he has given our schools $2.5 million but with so-called accountability standards. When he tries to paint us with a false narrative, that we are incompetent. We are unable to manage our own affairs. There is widespread corruption. This too is coded language and it too is racist. Our elected officials, along with the media under the pretext of Save Our Schools, among others are complicit in the undermining of our schools. Particularly the mayor and the City Council that are more interested in failed policies like mandatory minimum sentences, giving themselves a raise and disproportionately funding the police department instead of demanding that the state comply with its agreement to fully fund our schools.

JAISAL NOOR: Also raised was a widely circulated Baltimore Sun article that found Baltimore City has returned $66 million slated for school construction including heating repairs because it was unable to complete projects on time or at cost. The article was picked up by Republican Governor Larry Hogan who cited it as evidence of mismanagement.

LARRY HOGAN: According to a recent report by the Baltimore Sun, city schools have returned $66 million in state funding for building repairs, much of which was specifically to fix failing HVAC systems because the projects have been repeatedly prioritized, and have been repeatedly funded by the state, and then completely mismanaged by the city school system.

SONJA SANTELISES: We are asking for, what we are advocating for, is for that process to be changed.

SONJA SANTELISES: Because as has been noted and Delegate Lierman noted this, is it amounts to a poor tax.

SONJA SANTELISES: So, if you do not have the money to forward fund your project, you get dinged and your money gets sent back. So, if you’ve got a rich uncle who can give you the money to pay for the roof upfront. Well then you’re straight. If you don’t have a rich uncle, then you’re set trying to guess and project. So, I think it’s important for everybody here. Look, there are lots of legitimate anger and everything else, but let me tell you something. Please understand that $66 million is $66 million that we found that was not given to us. So, all this stuff about administrative mismanagement and ineffectiveness and the narrative, right? The narrative that gets put here.

SONJA SANTELISES: It’s interesting how it becomes ineptitude when it was actually us who found and did the analysis.

JAISAL NOOR: Go to therealnews.com for full coverage of the Baltimore School System.