Black, Brown and Woman: Afro-Latinas and Legacies of Imperialism 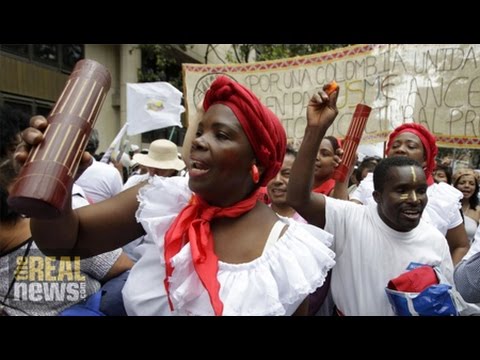 JARED BALL, HOST, I MIX WHAT I LIKE: What’s up, world? Welcome to another edition of I Mix What I Like here at The Real News Network. I’m Jared Ball.

For many here in North America, our continental neighbors to the south are often a blurry brown mystery. For some, Latin America is just a tourist destination. For many others it is the font of cinematic fantasy, the birthplace of drug lords and cartels, and of course a wellspring of swarthy men with machismo and sensuous sexpot women who are often depicted narrowly as maids.

For black America, it was the help. For Latin America, it’s /laɪˈjudɑ/. For many, discussions of Latin America are relegated to labor and immigration, while for many others the focus centers around other forms of conflict, in particular that between so-called black and Brown communities. But as a former U.S. president famously called to our attention, many are unfamiliar with Latin America’s African diaspora, and the fact that two of the three countries in the world with the largest black populations outside of Africa, Brazil and Colombia, are in Latin America.

In this segment, our focus is that latter country, Colombia, its African population, and in particular how that population is representative of the experience of African people in Latin America, and Afro Latinas specifically.

Our guest for this conversation is Charo Mina-Rojas. Mina-Rojas is a longtime activist who currently now works with Afro-Colombian Human Rights Campaign, which can be found online AfroColombianHR.org.

Greetings, Charo Mina-Rojas, and welcome to the show.

CHARO MINA-ROJAS, ACTIVIST, AFRO-COLOMBIAN HUMAN RIGHTS CAMPAIGN: Thank you very much. It’s a pleasure to be on your program.

BALL: Or better said, I should have said, bienvenidos campañera.

BALL: If we could, just start with a brief overview of this grouping called Afro Latinos or Latinas, or the African population in Latin America. Could you just give us a brief overview, obviously an overly simplified history of this community, and then particularly that of the Afro Colombian population?

MINA-ROJAS: Well, the Afro Latino population is people that is from African descent mostly, although there is some immigration from voluntary immigration. Most of the people of African descent in Latin America and Colombia were brought to–for this labor during the period of the slavery, in the earlier 1500s, brought by Spaniards, mostly, in some areas by Portuguese and people from England and from France. And so this population become slaves in the countries in Latin America, and also colonies from these European countries.

Now, Colombia is a country of–is the second-largest country of black population in Latin America. And we have around 26 percent of the Colombian population, which is over 10 million people here, black people here. And we have been here since earlier 1500s, middle of 1500s.

BALL: Now, we also know that from folks like the late professor Ivan van Sertima and others, and even the current work of Dr. Renoko Rashidi, that there African populations that predate the Colombian period, that predate European enslavement. Do they factor in? Does that–how does that–or I should ask, how does that history factor into this overall approach to the study of Afro Latinos or Latinas and African people in Latin America?

MINA-ROJAS: Well, it’s true. There are some studies that show that African continent and African people had some area contact, mostly economic contact. They traveled through the continent looking for trade and make connections and make relationships with indigenous peoples here in the continent. There are some–there have been some trace of these [presence (?)] in the continent, although, however, the main history tells about this [incompr.] the time where Africans were kidnapped and brought to the continent to be cheap or free and [known (?)] eventually free labor.

BALL: And we also know, just as a quick point, that what many, particularly in this country here in the United States are not aware of, is that only really about 5 percent of Africans stolen from the continent and brought to this hemisphere as part of the slave trade ended up in this country, that most of the African people were taken to Central and South America, to parts of the Caribbean. So we shouldn’t at all be surprised that there are these African populations in Latin America. Quite the opposite. And yet we’re often encouraged not only through our media here, but media in Latin America, to only see the stereotypical, more Europeanized Latin American as emblematic of all the population. So I just wanted to point that out, and as even a method of showing appreciation for the work that you’re doing, and for this conversation, because so many people seem to not realize just the extent to which African people were brought to that region of the world and still exist there and have their own issues.

Now, I was interested in the fact that you said that there were 26 percent, that Afro Colombians are 26 percent of the population there, which is nearly double the black population of the United States percentagewise, and yet we hear very little about the conditions of those communities. In fact, most of the people, certainly from my generation, who have heard anything about Colombia associate everything with, as I said in the opening, this drug trade or Pablo Escobar or something like that. Could you talk to us about the work that you’re involved in most specifically and how that is impacted by this overlay or this veneer of an approach via media that suggests that African people aren’t even in Colombia?

MINA-ROJAS: Right. You see, in the civility of African people in the continent [incompr.] being 26 percent of the population, black people or Afro-descendent people in Colombia was really–become really visible. In Colombia, we’re talking about how you in the United States and a lot of places don’t know that there is black people in Colombia. Well, in Colombia there is very little knowledge of the presence of African-descent people in this country. It was only until 1991, when the Constitution has some amendments, that there was a explicit recognition of the presence of people of African descent in the country. And specific rules came from that process that recognized rights of black people to land and political participation and other rights.

So, for us there has been a work of make us visible, make us present, and make sure that this country understand that we built it, that we have been here for many centuries, that we put our blood on this country, on these territories, on this land, and that what these white or mestizo people is enjoying today is in very big part because we made it for them. That’s part of the work that we do, the organization, the black committees’ process in Colombia, is a nationwide organization that work to make black people visible, to combat racism that exists here in this country and the racial discrimination and disparities that we are [incompr.] that [faith (?)] here. In defense, they write that we have two collective lands to collective property and to enjoy conditions for self-determination.

BALL: Now, you said that the change occurred in 1991 to officially recognize Afro Colombians. Was that the result, or to what extent–or could you tell us a little bit about the history predating that, that the–I’m assuming that there was a movement. And maybe you could tell us about a little bit about the grassroots movement to encourage or push or force that change to occur. And was this part of black Colombians looking to reconnect with their black and African past consciously and directly?

MINA-ROJAS: Right. Well, Afro-descendent people here in Colombia has a tradition, long tradition that we inherited from our ancestors of struggle. From day one that African people was kidnapped and brought to these–come to this area was in those days the country, we have been struggling. We have been struggling to be free, to be self-determined, to have autonomy. And we continued that through the process of being part of this country and this society. Although we have been continually visible for this country, for all those [centuries (?)], very vibrant process of organization has happened through the time. The ’80s was a particular important time for us, where organizations, nationwide organizations, mostly organized by intellectuals, they start getting to there and start building up consciousness about our roots, our links to Africa, our–that belonging. Where are we from? Where to belong to? That’s what we need to [offend (?)]. A lot of influence from the independent process, the self-determination process, the liberation process, is in the United States and Africa.

BALL: Right, because–I’m sorry to interrupt, but I remember seeing that there was actually a black consciousness movement in Colombia in the 1970s that, if I understood, mirrored what was happening in Southern Africa and here in the United States, right?

MINA-ROJAS: Yeah. There were actually several. One of them is the oldest–and still is as such today–is called /cimarrón/ or maroon. But there were many different groups, study groups that were working on this understanding of identity, understanding where we come from and who we are in this country. So it was prior to that, and it was all this process of identity to build, identity that brought us to make sure that when the Constitution was changed, we appeared as a particular ethnic group. So we are not just black people; we are people of African descent. And we have very specific rights because of that.

Some of those are very important for us, and it’s part of our legal struggle today, because we have lands and sister lands that our ancestors struggled for. They brought them. They put their blood for them. And we have been now. We want to keep those lands. They happen to be some of the richest lands in this country. And, obviously, you would imagine they–in the interests, economic interests, the political interests that are on these lands. So we are struggling today to sustain the property, collective property on those territories.

BALL: So just in the few moments we have left, is there anything in particular you would want viewers of this segment to do to lend their support to the work that you’re involved with?

MINA-ROJAS: Yes. Today is Human Rights Day, and they are launching in New York the decade of the people of African descent.

BALL: That’s right, because black lives matter no matter where they are.

Charo Mina-Rojas, thank you very much for joining us on this segment of I Mix What I Like on The Real News Network.

MINA-ROJAS: Thank you so much again.

BALL: And thank you all for watching. Please stay tuned with The Real News Network for more segments of I Mix What I Like, and of course all the other great programming you can find here. To you we say peace if you’re willing to fight for it, as did the late, great Fred Hampton. Charo Mina-Rojas, for the I Mix What I Like and Real News Network staff. Thank you all for joining us.