It's time to "break the hold of fossil fuel executives on politics, and actually elect a new generation of leaders to office who are going to protect the health and well-being of all people, not just a wealthy few," says Varshini Prakash, co-founder of the Sunrise movement

It's time to "break the hold of fossil fuel executives on politics, and actually elect a new generation of leaders to office who are going to protect the health and well-being of all people, not just a wealthy few," says Varshini Prakash, co-founder of the Sunrise movement 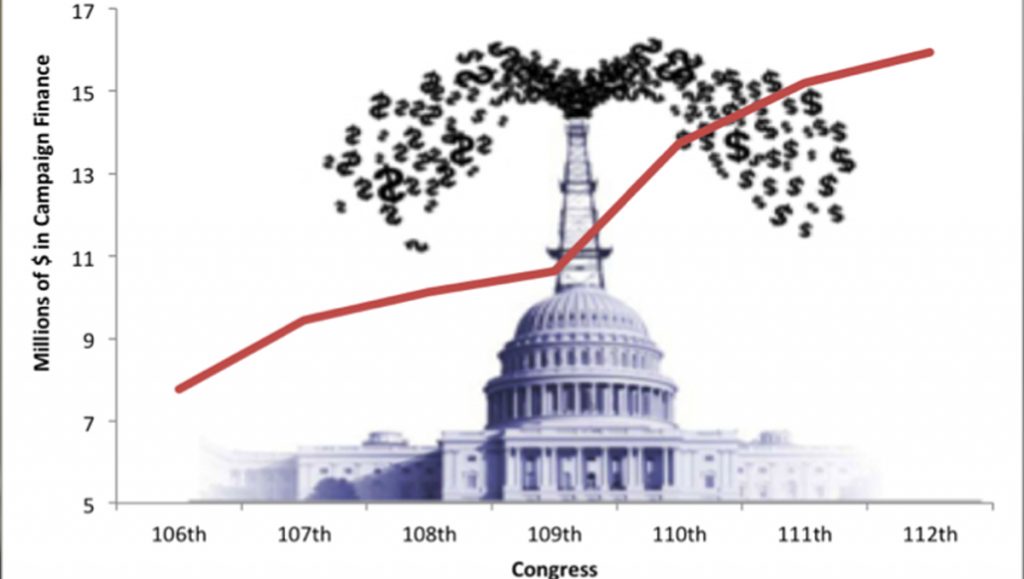 SHARMINI PERIES: It’s The Real News Network. I’m Sharmini Peries, coming to you from Baltimore. After the extreme weather events we have been experiencing lately– hurricanes and flooding in much of the southern states of the United States, in Florida, Puerto Rico, Texas; and drought and wildfires, and then mudslides in California, causing much devastation — here are what some scientists are saying about these events.

MICHAEL E. MANN: Yeah, so, we know climate change is leading to more extreme weather events of certain types. And obviously, more heat waves, more intense heat, and more drought, because as you bake the earth with record temperatures, you dry out the soils. You get record levels of drought, and a warmer atmosphere holds more moisture, so you can get record flooding, as well.

KEVIN TRENBERTH: There is climate change. The oceans are warmer, the sea-surface temperatures are higher. The air above the oceans is warmer and moister than it used to be, and the environment in which all of these storms are occurring is simply different than it used to be.

And this adds to the rainfalls in particular. It adds to the activity, in a general sense. And that activity is usually manifest in the forms of more intense, larger, and longer lived storms.

JENNIFER FRANCIS: Even if we were able to stop emitting greenhouse gases today, we would still see a lot more warming, and a lot more impacts of that warming, including extreme weather continuing into the future.

SHARMINI PERIES: And yet, climate denial seems to be the predominant response of the Trump administration. Progressive leaders are looking for answers. Organized by 350.org, progressives are taking up a campaign to stop the fossil fuel lobby from taking over our politicians, and our democracy.

The day after the Trump’s State of the Union address, Bernie Sanders and 350.org’s Bill McKibben, along with many other climate activists, plan to have a State of the Union of their own — a Climate State of the Union. Joining me to talk about the campaign is Varshini Prakash. She is the co-founder of the Sunrise movement, representing youth organizing for climate. Welcome Varshini.

V. PRAKASH: Happy to be here.

SHARMINI PERIES: Now, Varshini, this is a huge campaign. You’ve managed to get Bernie Sanders to join you in this effort. Describe what the campaign is about, and what you’re hoping to achieve.

V. PRAKASH: Yeah, absolutely. So, the No Fossil Fuel Money pledge is asking politicians who claim to care about my generation, young people, to refuse donations from fossil fuel executives, their front groups and the lobbyists who are jeopardizing my life, and putting the lives of millions of young people at risk for generations to come. So, we really see this actually, as … A year ago, I was here talking about the newest fossil fuel divestment movement, the movement to divest our institutions, college campuses, universities, etc., from the oil, gas, and coal sector, and re-invest it in renewable energies.

And what we’re seeing here, is actually taking the logic of divestment, and pushing it further into the political arena. And so, making sure that our politicians are not beholden to fossil fuel interests, or to corporate sponsors, but are actually answering to us, as young people.

SHARMINI PERIES: Varshini, tell us more about the Sunrise movement, and what you hope to achieve?

V. PRAKASH: Sure. So, I was a part of a team that co-founded Sunrise movement, which is building an army of young people to break the hold of fossil fuel executives on our politics, and actually elect a new generation of leaders to office who are going to protect the health and well-being of all people, not just a wealthy few. And so, we’re really attempting to bring together both the things that we’ve learned the best from, movements like the fossil fuel divestment movement around protest organizing, marches, rallies, demonstrations, and bringing it together with hard-nosed political and electoral organizing, so that we’re actually building political power for the long term.

So, in 2018, a big part of our work will be the No Fossil Fuel Money pledge, really drawing a line, and making sure that politicians who are claiming to care about our generation actually do so, and using this pledge as a way to distinguish between the reals and the pretenders, when it comes to climate action.

SHARMINI PERIES: Varshini, tell us how successful you’ve been on the Hill in terms of getting people to honor this pledge?

V. PRAKASH: Yeah, absolutely. So, over 100 candidates, and politicians thus far, have actually signed the pledge, including people like Keith Ellison from Minnesota, Ben Jealous, and Rebecca Otto. And there are many more to come. And a big part of our work over the next year will be actually pushing hundreds of candidates to sign on to the pledge. So, by this time next year, hopefully, we’ll have sent a very strong signal in Washington that the reign of these industry executives in our politics, who have spent that last few decades buying out politicians of both parties to bail out their dying industry, is actually rapidly coming to a close.

SHARMINI PERIES: Varshini, I thank you so much for joining us today.

SHARMINI PERIES: Now the event that Varshini was talking about, Fossil Free Fast: The Climate Resistance, and the State of the Union on Climate, will be aired right here on The Real News Network on Wednesday night at 7 p.m. Please join us.

Varshini Prakash was born and raised outside Boston, MA and joined the climate movement as an undergraduate at UMass Amherst where she led and won her fossil fuel divestment campaign. After coordinating divestment campaigns at a regional and national level, Prakash went on to co-found Sunrise, a movement building an army of young people to…

Dr. Kevin E. Trenberth is a Distinguished Senior Scientist in the Climate Analysis Section at the National Center for Atmospheric Research. From New Zealand, he obtained his Sc. D. in meteorology in 1972 from Massachusetts Institute of Technology. He was a lead author of the 1995, 2001 and 2007 Scientific Assessment of Climate Change reports…

Dr. Jennifer Francis is an atmospheric scientist studying Arctic climate change and extreme weather. She is also a Research Professor in the Department of Marine and Coastal Sciences at Rutgers University.