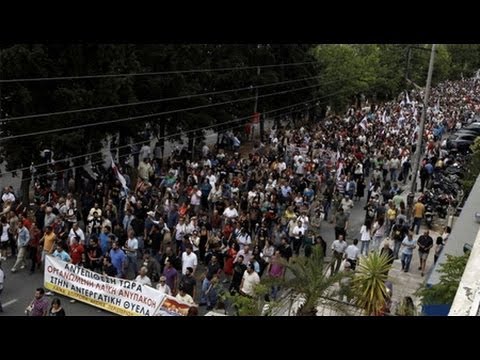 In Greece on Thursday, there was a state-wide protest. Protesters were in the street today demonstrating against the closure of the state television station ERT. The public access channel was switched off in the middle of the night by the government. It sounds so clandestine. But we’re here to discuss all of this with Costas Lapavitsas.

Costas is a professor in economics at the school of Oriental and African Studies at the University of London, he is a member of the Research on Money and Finance, and he’s a regular columnist for The Guardian.

Thanks for joining us, Costas.

COSTAS LAPAVITSAS, PROFESSOR OF ECONOMICS, SOAS, UNIV. OF LONDON: It’s a pleasure to be with here with you, Jessica.

DESVARIEUX: So, Costas, can you explain the significance of how the government decided to close this state-run channel?

LAPAVITSAS: Well, there were rumors for a little while that something was going to happen to the state television channel, something major was going to happen, but no one quite knew what that was. And then suddenly, couple of days ago, the government spokesman makes a public announcement, very aggressive and very provocative public announcement, in which he accuses the state television company for being all manner of corrupt and nontransparent things and announces [incompr.] evening they were going to shut it down, and that’s it. The government had decided to cleanse the Augean Stables of the public sector, and that’s [incompr.] they were going to make [incompr.] And that was that. So he announced that with great audacity, I would say, in the morning. And then, lo and behold, in the evening, around about 12 o’clock, the broadcasting systems went out. The government sent the police, and they shut the station down, the journalists made their last transmit, and everything went dark on the television screens.

Now, this was extraordinary, because things like this, as you can imagine, happen only when there is a coup d’état or when there is war. At least that’s how the Greek people think of these things. So quite naturally the people were shocked by this. It wasn’t so much the fact that two and a half thousand people would be made redundant. It wasn’t that this was simply a company that maybe wasn’t making its way in the world, perhaps, or anything like that. It’s just the extraordinary nature of it, which actually went to the heart of democracy in Greece.

Basically, people felt that their fundamental democratic rights were being attacked. This is what explains the flareup of anger and the mass participation in the protests against it. People felt that their democratic rights were transgressed. And they were right to feel so, because indeed they were transgressed. The government announced that it was going to shut down the public broadcasting corporation, keep it shut for an indefinite period of time, and replace it with another outfit when it saw fit.

It’s not a surprise that one after another the broadcasting authorities of Europe and elsewhere have come out and castigated the Greek government for this. The last person to do it is the director general of the BBC, who came out today and said this was completely unacceptable and the Greek government had to reopen the station as soon as possible.

DESVARIEUX: So if I’m hearing you correctly, it’s not just the station that people are protesting, because I’ve read that only 13 percent of the audience share in Greece actually even watch the station. But it’s more about the transgression of people’s rights and the government trampling on people’s rights.

LAPAVITSAS: That’s exactly right. You see, the share of the public that watches the public broadcasting corporation isn’t very great. That’s not uncommon, actually, in a variety of countries. The quality, incidentally, is very, very high. It’s typically much higher than the private channels. But the proportion of the population that watches it isn’t very great.

Nonetheless, people feel that this is their own station. It’s a public station. They identify with it. As part of their character and identity. They think it’s part of being Greek, basically, having this public broadcasting corporation. And the way in which it was shut down just like that and the screens turned dark felt like an affront, an affront, and actually something which made people very worried.

You know, what exactly is happening? People felt like it was some kind of act of war. This was actually a national asset and something that people felt was part of their national identity that was being attacked, hence the response. And the response is very, very vivid. Something very deep has been touched in people in Greece.

DESVARIEUX: But this isn’t supposed to be the death of the public access channel. The prime minister has come out and said that he wants to relaunch it. Is this correct?

Now, you’ve got to understand, in Greece, things like this are never taken very well, because a government such as this, which is authoritarian, which has ruled by decree time and time again, is not to be trusted to reconstitute the public sector broadcasting corporation on a democratic and open basis. It gives all kinds of assurances, but no one believes the assurances.

And, actually, the way in which [incompr.] shut the station down is absolutely no guarantee of a better station to come in the future. When a government dictatorially shuts down a station like that and says, that’s it, you’d better get used to it, what credibility can you give it that the new station it will create, when it does, if it does, will operate democratically rather than be an offshoot of the government itself?

So Greeks are very, very mistrustful. They think that when something emerges, if it emerges down the line, it will be in the pocket of the government at that time.

DESVARIEUX: And, Costas, what does this have to say about just the policy in Greece, the stabilization, these austerity measures, all of this? How does this fit into that puzzle?

LAPAVITSAS: Well, it’s very much part of the stabilization program and what has been happening to Greece the last three years, you see. This isn’t an arbitrary act at all. You’ve got to understand the government, the Greek government has been making a lot of noise recently about great Greek success. The threat of exiting the Eurozone apparently has passed, and now Greece is set to make a tremendous recovery.

Now, no one quite believes that, and they are right not to believe it, because Greece is lodged in a very, very deep recession–actually, a depression. Every single bit of data that comes out indicates that the economy has been destroyed. The last batch of data to come out, yesterday, showed that unemployment in the first quarter of this year is more than 27 percent. Believe it or not, it’s more than 27 percent. And youth unemployment is more than 60 percent over the three-month period. This is an economy that’s been destroyed.

Now, as that has happened and because that has happened, the government has managed to shrink the fiscal deficit, because it doesn’t spend any money, basically, and because it taxes everybody ferociously, and it’s managed to shrink the external deficit of the country, because again, the economy has been destroyed and there are no inputs. So the government is presenting this as some kind of great success. The reality is, however, they cannot collect taxes, its revenues are very weak, and Greece is teetering on the edge of a crisis on a regular basis.

Now, the troika’s in Greece at the moment, the people who designed the Greek program, and the troika is demanding that the Greek government stands by its word to sack tens of thousands of civil servants. That’s why the government decided to go for shutting down the public broadcasting corporation. It’s their way of saying, we will quickly sack more than 2,000 people, throw them out in the streets, just like that, and present it as an act of cleansing the Augean Stables of corruption in Greece and so on. So it’s very much part of the program that Greece has been going through the last three years.

Now, reaction and the response is very, very heartening, because it shows that after about a year and more of passivity, basically, in Greece, people have had enough and are prepared to react strongly.

Now, the left in particular has reacted very strongly. And in my view there are two things that the left should do right now, two things connected, but not the same. The first: the left must take it upon itself to organize grassroots opposition. It’s very, very important that lots of people turn up at the site of the broadcasting corporation, the place is organized, is strengthened, and some kind of grassroots mechanisms emerge that allow the public broadcasting corporation to survive and allow people to make broadcasts even if officially they’re not entitled to do it. They must establish their own way of saying in practice that this will not pass, this will not be accepted, this is a transgression of democratic rights and it will not be accepted. That’s the first thing.

The second thing that the left must also do would of course be to challenge the government at the parliamentary and aggregate level. It’s time this government went. It’s a very, very unstable government. It’s an authoritarian and actually I would argue essentially corrupt government. He has been applying all the measures that the E.U. has imposed on Greece ferociously. It’s time it went. All it requires is a push, really, to tip over, because there’s such anger in the country. It’s up to the left to do it. And I think the left should feel the obligation it has towards the Greek people, and actually towards history, and get on with it.

The conditions for forming a government of the left in Greece are ripe. They are there. What is missing is a little bit of decisiveness, some bravery. And I think it’s about time we saw that on the part of the left in the coming period.

DESVARIEUX: Well, thank you for joining us, Costas.

Costas Lapavitsas is a professor of economics at the School of Oriental and African Studies, University of London