Costas Lapavitsas: The only way to defeat the Golden Dawn and Greek fascism is through popular mobilization that persuades Greek working people and the middle class that democracy and social change can create a just economy

Costas Lapavitsas: The only way to defeat the Golden Dawn and Greek fascism is through popular mobilization that persuades Greek working people and the middle class that democracy and social change can create a just economy 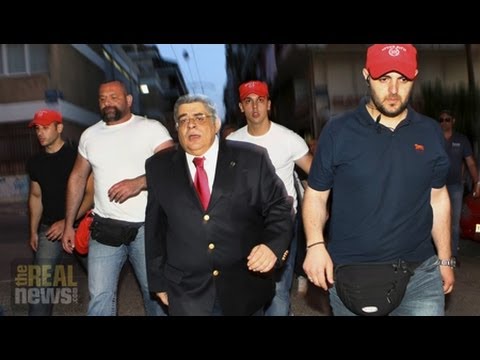 Three leaders of Greece’s extreme right wing Golden Dawn Party have been released on bail after being arrested and charged with murder, money laundering, blackmail, and illegal possession of firearms, among other charges. The crackdown on Golden Dawn follows the assassination of 34-year-old rapper Pavlos Fyssas.

Now joining us to discuss this is Costas Lapavitsas. He’s a professor of economics at the University of London School of Oriental and African Studies. He teaches the political economy of finance. He’s a regular columnist for The Guardian.

NOOR: So, before we get into this latest news, can you just explain how Golden Dawn became so powerful in Greece?

LAPAVITSAS: Golden Dawn has been around for a long time, since the late ’80s. It made some headway later on on the immigration issue, but it didn’t really do anything very much. Golden Dawn became a serious political force only after Greece was subjected to bailout conditions, only after Greece became a test case for European policies to deal with its crisis, the dreadful policies that have been applied to Europe for the last three years.

There are three reasons why Golden Dawn has emerged as a genuine political popular force. The first is, of course, terrible social conditions–unemployment, loss of income, and a sense of destruction of everyday life. Golden Dawn talked to ordinary people and basically argued–falsely, but it did–it argued that immigrants are to blame, policies of the IMF and so on are to blame, and they were going to change things–Greece for the Greeks. That’s the first thing.

The second reason why Golden Dawn became so powerful is because of corruption. Corruption has been endemic in Greece, and there was a widespread sense of the political system being incredibly corrupt. Golden Dawn spoke to people about this again and promised them that it would bring a state of clean hands about. They themselves were clean, and they were going to clean up Greek politics.

The third reason why Golden Dawn has become powerful is because of a sense of national humiliation that has prevailed in Greece. Greece has been humiliated the last three years. People feel very keenly that they are beggars, that they’ve been spoken to very, very badly by the rest of Europe. And Golden Dawn has appealed to them by–to people by talking to them about the flag, traditions, and so on, and touched a rich vein of national feeling.

NOOR: And, you know, you raised the point that they’ve been around for decades. They’re well known. Why did the authorities choose to go after them now?

LAPAVITSAS: Very good question indeed. The authorities have known about the activities of Golden Dawn for a long time, and they’ve known about the activities of Golden Dawn during the last three years. Essentially, these people have established a reign of terror in some of the areas of Athens and in other cities, terrorizing immigrants, knifing people, beating them up, and chasing leftists and other activists more and more during the last two or three years. The authorities have known about it, and Golden Dawn are very closely implicated with the Greek state at the lower reaches, the police and security forces. The authorities prefer to turn a blind eye to this because it suited them and because they completely underestimated the threat that Golden Dawn posed for Greek polity and Greek society.

Now, in September, the left mobilized, on the one hand, organizing teachers and so on on strike action. But also the extreme right organized. They appeared very confident, very confidently. They intervened in the streets. They beat left-wing supporters. And then they knifed and killed Pavlos Fyssas, who was a well-known antifascist and a musician, a rapper in Athens. This was the trigger.

The government decided that this was the time to break out of [incompr.] to attend a new solution for its political problems by attacking the extreme right. The extreme right had become too big. It had become a problem. These people had their own independent agenda. They’re fascists, like I said. They have their own independent agenda. And the Greek state realized that they’ve become too dangerous, so they moved sharply and violently against them. They arrested many of the leadership, the leader of the organization, several of the key [[email protected]], MPs, and others, and they’re bringing them to court in due time.

NOOR: And finally, like you said, the Golden Dawn likely won’t go down easy, even with this crackdown. What impact do you think the crackdown will have? And it’s been argued by some that even with this government crackdown, xenophobia, racism, and fascism have not been adequately yet tackled yet by Greece’s political leadership. What’s your response?

LAPAVITSAS: My response is that we’ll have to wait a little bit first, because things are in flux. As you yourself said when you opened this discussion, three of the leading members of Golden Dawn have already been let out on police bail. This wasn’t what the government was planning. Clearly the legal action and the legal case against them has not been put together in the best possible way. Clearly there are holes there. And this is a very worrying development, because it means that when and if the cases go to court, it is possible that they will be thrown out.

Now, we don’t know how it’s going to pan out, but the development today is not very good at all, and it’s not very good because these people are out. If their case is thrown out of court eventually, they’ll become heroes. They will be able to go around saying that the state took them on. This is the state that has allied itself with those who have destroyed Greece. The state took them on, and they stood up to it, and the state had to let them out. They will look like popular heroes. That’s a great danger which we’re facing at the moment. We shall see how it pans out, but developments today are not very good.

But even if the state, the Greek state succeeds eventually in locking these people up, even if it does manage to build a solid legal case and it proves that this is a criminal organization and locks them up, it would be a mistake to think that this would be the end of Golden Dawn. Fascism doesn’t disappear, and it’s not destroyed by state power alone, by the authority of the state. Fascism is a deeply rooted popular movement in Greece and elsewhere, and it needs popular action to defeat it.

The only way to defeat it, I feel, is to mobilize working people, to mobilize the popular strata in Greece around a program of opposing the economic conditions and economic policies that have ruined life, but giving them the prospect of democracy and deep social change, a popular transformation, a popular transformation from below, so they can actually persuade working people and persuade the middle class that there is another way out–in other words, undercut and undermine the genuine support which the fascists already have, not by the state alone. It cannot be done by state power alone. And even that at the moment looks very doubtful in Greece, because the state is a shambles.

NOOR: Costas Lapavitsas, thank you so much for joining us.

NOOR: We’ll certainly keep following this story. Thank you for joining us on The Real News Network.

Costas Lapavitsas is a professor of economics at the School of Oriental and African Studies, University of London