Chuck D and DMC on hip hop and America Pt4 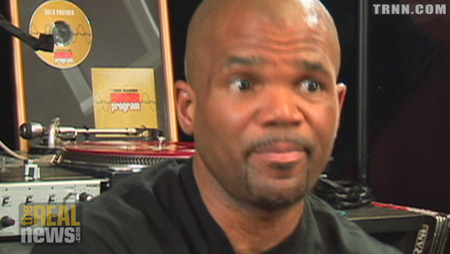 CHUCK D, RAPTIVIST, MEMBER OF PUBLIC ENEMY: Chuck D back, On The Real Off The Record for The Real News Network. And the king of rock himself, Mr. Hall-of-famer, Mr. D.M.C. Real News Network is actually a network that’s talking about, you know, delivering news uncut, unfiltered, as it’s supposed to be, because if you look at news today, it’s like selling the same things that a film is trying to sell or music is trying to sell. I mean, sometimes you we look at news, whether it’s the papers, whether it’s on television, or you hear it on radio, it’s mixed with so much you wonder if it’s a video or entertainment. What do you think that—in order for people to get the information—that they need? Because in America it seems like it’s at a dumbed-down level. And when you travel across the world, how do you see information being disseminated? ‘Cause it seems like, you know, you go around to different countries, people say, “Wow, D., I follow your music,” even young kids, 12 years old, seems like they have more information about you as an American hip hop artist than people in America have.

D.M.C.: Oh, for sure. But if you look at the media and the news in America, it’s all—I don’t know if it’s sensational or not. To me this all comes across as scripted. I don’t think there’s no news to say this is what’s happening, and there’s no dialog to talk about the actual issues. It’s like they’ll say, you know, “Such and such happened in the hood. But yesterday Amy Winehouse—,” and, you know, they’ll talk about politics. Now they’re making this whole Obama inauguration, they’re making it like—what’s the show that Joan Rivers used to host?

CHUCK D.: I call it the radiation of a radio-TV-movie nation. And, like, one of the problems I had in 2004 when President Obama spoke as a senator is that they would call him the star of the Democratic Party. I’m, like, you don’t mix—you know, a person who’s in office, you don’t call him a “star” like [inaudible].

D.M.C.: You don’t bring Hollywood into it, because then people, when they’re watching, that’s what they’re going to start seeing. You know what I’m saying? People just going to watch: “Okay, this is what they said, so this is how—.” It’s like their marketing and promotion and stuff like that. The real hip hop separated all of that, because it was like this: even when Melle Mel and them did “The Message,” what did that do across America? “Oh my God—[inaudible] broken glass everywhere.” But when Run-D.M.C. came along, you’ve got to understand what we did. I said it on “Adidas.” It was kind of like Real News. When Run-D.M.C. came along, we took the beat from the street, heartbeat, essence, everything that was happening—”Tricky”, “Adidas”, “Walk This Way”, “It’s Like That”, “Hard Times”—we took the beat, I’m talking about the heartbeat of the street, and put it on TV as it was. We didn’t say it needed to be this; we didn’t claim we had the blueprint. And if you really think about it, rap, hip hop before Run-D.M.C. is exactly the same way it was before we came, because Melle Mel and them, you know, before they made records, you would go see them. They had the sheep skins, Adidas, the Godfather hats, the gold chains. But when they started making records, it’s those same people today that says, “No, we don’t need you to do any interviews. Just go be our puppet and do the dance thing.” Melle Mel and them, when they got there, they was just thinking, “Okay, now we’re in show business, so here’s what we need to do. We need to dress like this. We need to only rap over the disco records. Okay, ‘Message’ was a hit, so we got to make ‘Survival.’ Then we got to make ‘New York New York.’ Then we’ve got to make [inaudible] Then we got to make ‘Cocaine’ [‘White Lines (Don’t Don’t Do It)’].” And then, you know, Moe Dee and them, “We’ve got to make [inaudible] It’s got to be message records. We’ve got to be message records. We’ve got to be message records.” We was like, no, man, this is hip hop. We can’t get into Studio 54. They don’t want to hear us, because what rappers today are doing is what the world thought hip hop was when we first started. But when we started to open our mouths up, they started hearing economics, and history, and education. And even if the guys were uneducated, there was always vision; it was always visionary. And then it’s like you said: hip hop is the CNN of the black community.

CHUCK D.: By the way, Run-D.M.C. first came out, before it was the CNN, Run-D.M.C. made it the young people’s Jet Magazine.

D.M.C.: Right. We broke it down to your level of understanding.

CHUCK D.: There’s a person in Texas who’s probably hearing this person from New York, and he’s listening to Run and D.M.C. talk about something to Jam Master Jay, and it’s like, “Whoa!”

CHUCK D.: And when you probably went there, and you was like, you know, “Yo,” you know, and they’re telling you about “Yo, this is how it’s going down in Texas.” So, yeah.

D.M.C.: Exactly. People was able to relate across the board, because the news was the same news that was everywhere. We didn’t say, “We can only talk about this when we go here.” We didn’t have a PR person saying [inaudible] talk about this [inaudible]. We just talked about it. So a lot of those dudes was—even though we were different locations and different dialects, “Man, I can relate. He’s speaking for me, man. This hip hop is speaking for me, man.” And another thing. Hip hop, whether you was in Beverly Hills or whether you was in the ghetto, for that one hour of listening to that tape or for those three hours at the hip hop concert, everybody was equal, because we all went through the same problems. OThe rich kid, the white kid, the Asian kid, and the poor kid was able to stand there together and go, “Yeah, that’s right. That’s what’s really happening,” not, “This only happens here, and if you do that, you’re not hip hop,” and just like that. For the four hours of the concert—. And you used to have to wait till Friday and Saturday for the radio hip hop show, and you used to have to be good to get on the radio. I spoke to producers and radio guys on, and they say, “Yo, we just do this to get our check.” But I said this: yo, a lot of records that are popular now are bad demos that people would have gave us years ago, Chuck, and we would have listened to it. We wouldn’t have dissed it, though.

CHUCK D.: —’cause they want to keep the same names. I mean, I hear this record by an artist that I kind of like, you know, and I still like what she does, man, but, you know, seriously, the last three times, it’s like, how could they play this? The record was terrible.

D.M.C.: Even Marvin Gaye, who was an R&B artist, when he started singing [inaudible] putting politics and economics into the record. “Baby, I love you. I’ll be home in a minute. But the man is on my back and the government, and I’ve got to pay my taxes,” and this and that. We were the voices. We were the voices of our people. Run-D.M.C.—you know, I hate when people say, “You’ve got fans.” I say I got friends, because if I say I got fans, that means I’m above my audience. No. I am the audience. I’m speaking for them. I’m not better than them. I’m not smarter than them. I’m not more talented than them. I could choose something different. But hip hop was the voice of the whole people, our information: “This happened last night. We’re going to speak about it.” But if it was bad, we had enough balls to say it was bad.

CHUCK D.: How do we actually liquidate or turn around or transform somebody that comes up to a D.M.C. is like, “Yo, if it wasn’t for y’all, there’d be no me.” I mean, you talk to the rap artists who are near 30 an in 30s some cases—Ludacris, very powerful mind, very powerful voice; you know, Nelly, who—I actually did something with Nelly, and, you know, brilliant mind, brilliant voice—you know, how do they break the chains? Is it the problem of media sitting down one-to-one or an opportunity or a situation to actually bring the man out of them to issue in front of the millions that they know? Or is it the situation where somebody within those ranks, you know, somebody who’s considered a pop star today is going to just shake everybody up? I mean, right now we’re facing different times.

D.M.C.: Yeah, times is really, really changing. And, you know, I look at it like this: we’re going to see who steps up. We’re going to see if all the energy, all the power that these superstars have—you know what I’m saying? Okay, you’ve sold a lot of records, and you’re a movie star now, and you’ve got a business, but now here’s what we want to know. That’s the only way we’re going to know. We’ve got to start asking the questions. We’ve got to start asking the questions. See, people tell me—. D, the best advice I ever got wasn’t from a manager, or, you know, a record head, or even a lawyer; it was from people in the streets: “Keep doing what you’re doing. We listen to what you say. We listen to what you say on your records, and then we listen to what you’re saying in life. It’s real, we get the whole picture, because you’re speaking from a place of truth, you’re not hiding, you’re revealing, you’re informative. But everything you’re saying is how I think.” See, that’s what’s wild.

CHUCK D.: And that’s one of the premises that The Real News Network is trying to build itself on the world population. We’ll be back with more D.M.C., king of rock, when we return On The Real Off the Record. This is special, coming up, so stay tuned. Keep it locked.

Carlton Douglas Ridenhour (born August 1, 1960 in Roosevelt, New York), better known by his stage name, Chuck D, is an American rapper, author, and producer. He helped create politically and socially conscious rap music in the late 1980s as the leader of the rap group, Public Enemy.

Chuck D and DMC on hip hop and America Pt1