Chuck D and DMC on hip hop and America Pt.5 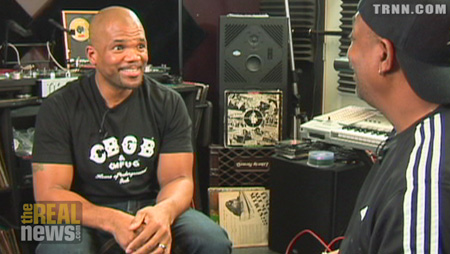 CHUCK D, RAPTAVIST, MEMBER OF PUBLIC ENEMY: Chuck D, alright? Right here for The Real News Network, also On The Real Off The Record right here with the legendary D.M.C., Mr. Darryl McDaniels, hip hop hall of famer always, recently inducted rock and roll hall of famer. Now, I wanted to also say, you know, I’m doing a lecture somewhere in the middle of the country not too far from Cleveland, but I tried to schedule it, and I would walk there to see, but I’m going to be at one of the celebrations throughout the year. But that’s going to be a great time.

DARRYL “D.M.C.” MCDANIELS, MEMBER OF RUN-D.M.C.: Well, we’re just making room for y’all to walk down the carpet to the Rock and Roll Hall of Fame. You’d better be next too.

CHUCK D.: Well, I said, “Run, congratulations,” and he hit me right back, and he said, “You’re next.” I’m like, “Nah. There’ll be some between.” But really it’s time to celebrate the now, and I think the fact that you was inducted into the Rock and Roll Hall of Fame, which is big for all of us, it was bigger than the Notorious movie for me, and then, for all of the genres, it’s all relative altogether. And, of course, on the enemy board, which is the On the Real, Off the Record board, in this case, you know, I had people say, “Well, what kind of questions did you want to ask Mr. Darryl McDaniels?” And we even started with Jesse, right there behind the camera, and he had a question that he wanted to ask. We can hear you. Go ahead. This is loose and free.

JESSE FREESTON: I want to know why people aren’t explaining violence anymore. A lot of MCs in particular talk a lot about violence but don’t give an explanation for it. [inaudible]

D.M.C.: Well, now, personally, this is my take on it. A lot of MCs is making money off of talking about violence, and they know it, because if you tell them to do otherwise, they’ll say—or you criticize them, I hear a lot of rappers go, “Man, you know, they don’t say nothing to Bruce Springsteen and Arnold Schwarzenegger.” And I go, man, that’s the dumbest thing you could ever say, ’cause if you want to give me that excuse, this is what I tell them: stop rapping and go be a actor. And then they look at me like—. No, if that’s your excuse—because this is totally different. My thing is that—. Ice-T told me this. He said, “Yo, D., want to make a lot of money quickly? Sex and violence—it sells.”

D.M.C.: It sells. Why are they going to explain it to you when they’re getting a paycheck? Because that same rapper, he knows: “Okay, I’ll make this violent record. But the minute I make the nonviolent record, I’m over.” But that’s what he’s thinking. See, we didn’t think that. We made the nonviolent record or the positive record, and [inaudible] put us on. So for them, they done did it so much without explaining it. You know what I’m saying? Okay, it’s like this. Here’s a good example. I was going to say this earlier. One thing about hip hop was this: even if we talked about violence, or even if the rapper talked about being a stickup kid, or even a drug dealer, or even Run-D.M.C. saying what we said or, Chuck, you saying what you said, this is what’s really missing from the picture: a lot of kids who are of the younger generation are going to Radio Old School at noon, and I’ll just say what we’ve just been talking about all day. And this kid looked at me. He was an intern there, probably was, like, 18 years old, 17 years old. And he kept looking at me when I was speaking. So when an hour was up—this was in Philly on Power 99—he looks at me and says, “D.M.C., I wish I was alive during the old school era.”

D.M.C.: And I said, “Why are you saying that, man?” “‘Cause,” he said, “yo, there was so much there for me.” The same thing I say: “You look to the right, you had this. You looked here—.” And I said, “So what’s the matter with it now?” This is to answer your question. He said, “You know, it’s kind of like when you’re looking at your older brother, and he’s going down in the basement with his boys. And when you turn 16 years old—. You started looking at him since you was 12. He’d come in with his boys and his girlfriend and stuff. But then, one day, he opens the door and says, ‘Come on, little bro.’ And you go down there, and you go, and your brother got his black light on, and, you know, your brother’s playing the music, and you’re watching your brother’s girlfriend walk around with his T-shirt on. When you come up out of the basement, you don’t go blab to the whole world what was going on, because that was ours.” He said, “Yo, most of my friends is talking about violence and money and drug dealing, and they don’t even do it no more.” He said, “Me, as a young guy, there’s nothing left for me to enjoy.” And I was like, “Wow.” But the answer to the question is: these guys are only talking about the violence because they’re making money off it, because if we was talking about polka dots and dandelions in the mountains, those same artists would be talking about what? Polka dots and dandelions in the mountain.

CHUCK D.: With money evaporating and that dollar going down, that will change. And we’ll be back with—.

D.M.C.: We care about our audience too.

CHUCK D.: Well, yeah. Well, we’ll be back with a category called “Speak to Your Mind”. It’s like quick question, quick answer, as best as possible, ’cause really we’re coming up in a time where quick answers just won’t do anymore. So we’re going to just try to do our best on the “Speak to Your Mind” segment coming up next, alright, On The Real Off The Record, The Real News Network.

Carlton Douglas Ridenhour (born August 1, 1960 in Roosevelt, New York), better known by his stage name, Chuck D, is an American rapper, author, and producer. He helped create politically and socially conscious rap music in the late 1980s as the leader of the rap group, Public Enemy.

Chuck D and DMC on hip hop and America Pt1