"Does anybody care if Bangladesh drowns?"

Our best stories for 2007: Environment 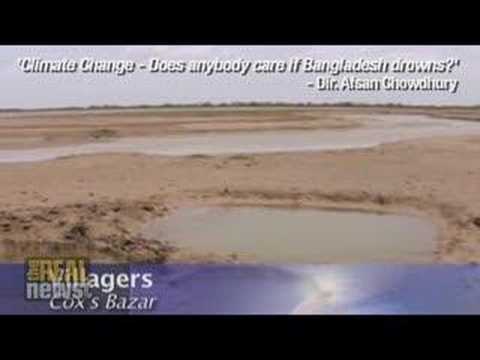 PAUL JAY, SENIOR EDITOR: Tropical cyclone Sidr devastated parts of Bangladesh on November 15. The tallies of people killed and left homeless keeps going up. This week, the U.N.’s humanitarian agency announced that over 8.5 million people were affected by the storm. And the Bangladeshi government said it needs $1 billion for recovery. Over 3,000 people have died. Half a million homes were destroyed. Bridges, roads, and rice paddies wiped out. Journalist Afsan Chowdhury recently made a film called Who Cares if Bangladesh Drowns? which premiered at the U.N. climate change conference in Bali this week. Afsan Chowdhury joins us now. Afsan, the title of your film, Who Cares if Bangladesh Drowns, if you judge by the U.S. presidential election campaign, Democrats or Republicans, the answer to that would be "nobody." The issue of what’s happening in Bangladesh and countries like Bangladesh, who seem to be most affected by the most early stages of the climate change crisis. It’s not even in the U.S. dialogue.

AFSAN CHOWDHURY, FILMMAKER & ENVIRONMENTALIST: No, certainly it doesn’t figure much. It’s not recognized, partly because people are used to thinking of what climate change is doing in the long run. But in a country like Bangladesh and a lot of countries, like in Africa as well, climate change has already happened, the devastation has already occurred. That has not seeped through. So I suppose, yeah, people really don’t care.

JAY: For you, yourself from Bangladesh, from people from the region, how does this feel that you can have such disasters and virtually go unnoticed?

CHOWDHURY: Well, disasters of one kind is the cyclone disaster which we had. And if you look at the history of disasters, cyclone disasters, you’ll see, in 1970, several hundred thousand people were probably killed. And we really don’t even know. In 1990, there was another cyclone, and about 75,000 people were killed. And so people have worked since 1990 and reduced death toll. But what people cannot do much about is the devastation on livelihood, on shelter, homes, schools, and agricultural production. So people have a sense of, a feeling, let’s say, that, well, okay, nobody’s really going to listen to us, nobody’s really going to care, and people live with this.

JAY: The problem of massive flooding in Bangladesh, it’s not new. To what extent do scientists know that this is more exaggerated by the climate change crisis?

CHOWDHURY: Well, scientists are now clear, saying, yes, this is caused by climate change crisis. Clearly flooding is going to happen and the tide is going to come in much more ferociously. Now, what happens in a country as low as Bangladesh? Because even if they’re a few centimeters, parts of Bangladesh are going to drown. So if there are millimeter, the meter rises, one-third of Bangladesh could disappear. But they know one thing, is that, yes, the regularity of the cyclones are going to happen.

(Excerpt from the Film: Climate Change – Does anybody care if Bangladesh Drowns?:)

CHOWDHURY: What you see around you is really habitation. What you see around are people’s lives, homes and these have all drowned under the floods. This has happened in one country, two country, three country, and probably happen this year to many other countries. Every few years it does it at a scale which is unprecedented. It does it at a scale which causes suffering like people are short of medicines, people are short of food, people are short of livelihood, all of them washed away and they have nobody to turn to. It’s so very easy to ignore Bangladesh when it drowns, it’s so easy to ignore the poor when they drown. The bad news? This is going to happen more and more. Climate change will make it a regular part of life.

JAY: And worse because of climate change.

CHOWDHURY: And worsened because of climate change, because climate change comes to a country which has already probably one of the worst natural disaster-prone countries.

JAY: So we’re talking about the rising level of the sea [crosstalk]

JAY: … as a result of global warming and melting of global ice caps.

CHOWDHURY: Yeah. That’s only one part. And I think that is what has happened is the imagination of people caught by the rising sea or the melting of the polar ice caps. But the effect of climate change is on all other matters, including tides, including agricultural production, including cyclones, including river erosion, including drought, including salinity, which, I don’t think the western world understands what salinity is, that vast tracts of Bangladesh are already beyond cultivation.

(Excerpt from the Film – Does anybody care if Bangladesh Drowns?:)

VILLAGER (SUBTEXT TRANSLATION): This is part of the sea. We live next to it. The sea used to be far away. It’s coming near.

CHOWDHURY: Where will you go if it comes even closer?

VILLAGER : What can we do! Its God’s will!

SALINITY VICTIM: We cannot do anything with this saline water. We cannot drink, cook or cleanse ourselves. Only the poor will die.

CHOWDHURY: It’s not like it’s only happening in Bangladesh. It’s also happening even in Nepal, it’s happening in parts of West Bengal.

JAY: These areas are going to become more or less unlivable. Where are people going? And to what extent is this kind of climate change refugee going to be an issue?

CHOWDHURY: It’s going to impact very negatively on India. Certainly, Bangladesh will be, probably will be wiped out. I hope not. But India is going to be very badly affected. That’s going to have a regional and perhaps even a global impact.

JAY: So where do millions and millions of Bangla–Bangladesh is one of the most populated countries in the world–where do Bangladeshis go and what are the consequences of them going there?

CHOWDHURY: Bangladeshis are already going, and this we have also shown. Bangladeshis do come, because of climate change and natural disaster-related situations, to the cities. Dhaka, for example, is almost collapsing. It cannot sustain any more population. Now, they are…. where will they go? They will go to India. That’s the only place. But India’s already fencing the borders. But fencing the borders may actually be the trigger, because if you refuse to let people cross over, it’s good for India in a short sense, it’s bad because it’s going to create lots of political problems.

JAY: Speaking of political problems, Bangladesh is mostly a Muslim country. Is there a sense in Bangladesh that this is sort of another way the West doesn’t give a damn about Muslim societies?

CHOWDHURY: I don’t think they see it as a Muslim society. But the feeling is very clear that Bangladeshis, or people who know, think the West doesn’t care. You are also going to have population groups who are going to see it in terms of what you mentioned: Islam and the West. This is going to be interpreted that way. Unfortunately, in India you have a population which is Hindu-dominated. So, if India, as we asked and people are saying, if India stops refugees from crossing the borders, it could be interpreted as a communal question.

CHOWDHURY: Hindu-Muslim question. As a result, some people may want to take advantage. And there remains no way that can be stopped from becoming a regional crisis.

JAY: There’s a conference coming up in Bali to discuss climate change. Is it going to address long-term and short-term solutions?

CHOWDHURY: I don’t think there are going to be too many short term, because I’ve been reading all the documents and it says, yes, there should be especially for the hard-hit countries like Bangladesh, some in Africa, and also the oceanic island countries, there should be an adaptation fund and so on, so forth. But if you look at the money that is coming to U.N., that money is equivalent, I think, to one week’s expenditure Britain does on flooding in Britain. And that kind of money is not going to make any kind of difference. Now, I think the richer countries and also richer people think they can escape climate change by spending money on themselves rather than spending money on the world. And if you listen to the Canadian prime minister saying this is going to be Canada’s position, when you take that kind of nationalist position on a global problem, I think you are probably missing the mark, you probably don’t understand the problem as well.

JAY: There’s no sense of urgency in most of the industrialized countries.

CHOWDHURY: No, there is no sense of urgency. And I think the feeling is that West can escape.

JAY: What are the global implications, say, of the crisis in Bangladesh?

CHOWDHURY: I think the crisis is not going to directly come from Bangladesh to the West. If any crisis happened, it’s first going to affect India. In terms of conflict, unfortunately, people are also mentioning terrorism. Already in India there is great fear, concern, and anger that Bangladesh is being used by some groups who are terrorists linked to extremist groups who are using—.

CHOWDHURY: [crosstalk] Al Qaeda terrorists. And they are using Bangladesh as a sanctuary to mount attack on India.

CHOWDHURY: That is something which I don’t think has been understood in the West, that we are, we are linked, whether we like it or not, globally. We haven’t in the history of mankind ever faced a situation where we are really looking at apocalypse, if you will. Science is right, but the political science is very wrong.

Afsan Chowdhury is a journalist and communications development expert based in Dhaka, Bangladesh and Toronto, Canada. Director of the film, “Climate Change – Does Anybody Care if Bangladesh Drowns?