Do the Democrats have a different answer on Iran? 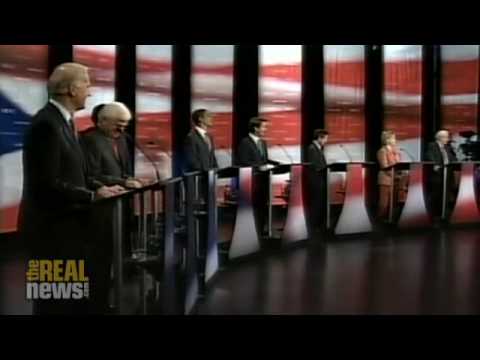 PAUL JAY, SENIOR EDITOR: The vote over the Kyle-Lieberman amendment, the Senate resolution to declare the Iranian Revolutionary Guard a terrorist organization, essentially was followed up on by the administration when they did declare the Revolutionary Guard a terrorist organization and issued sanctions against three major Iranian banks. The reaction in the Democratic Party was interesting, Senator Clinton being the only presidential candidate in the Senate that voted for the resolution. All the other candidates both in and out of the Senate opposed it—quite a significant split, I would say, with Joe Biden and Senator Webb, who were very, very vocal, vocally against the resolution. What do you make of what this next Democratic, well, I should say, between now and the election, the leadership of the Democratic Party? And if we are looking at Senator Clinton as the next president, which if all things remain the same we probably are, what do you make of the Democratic Party and Iran?

NOAM CHOMSKY, PROFESSOR OF LINGUISTICS, MIT: The Democratic Party is somewhere in between the administration and overwhelming world opinion. I mean, the world is just appalled at the thought that the United States might invade Iran, attack Iran. Now, even in the region, you know, where the countries don’t like Iran at all—Turkey, Saudi Arabia, and Pakistan hostile to Iran in many ways—but, nevertheless, the population in the region, which has been polled, prefers Iran to have nuclear weapons than to having any war, even though they definitely don’t want Iran to have nuclear weapons. When you go beyond, opposition is simply overwhelming. In fact, you can’t find any corner of the world, I think, outside of Israel where there’s any support for the U.S. policies. In fact, the American population is overwhelmingly opposed. About 75% of the population—at least a few months ago, before the huge propaganda offensive—75% of the population was against any threats against Iran. So the Democratic Party is sort of hovering in between almost universal world opposition to even the threats of war.

JAY: There seems to be a division amongst at least the leadership of the Democratic Party on this question. Webb, Biden on one side and some others, certainly, you know, Edwards, Obama, Kucinich, Gravel. But in terms of leadership there seems to be a serious split with Senator Clinton signing on to this resolution.

CHOMSKY: There’s a split between Gravel, Kucinich, and others like them and the rest of the Democratic Party, and then there’s a split between them and the extreme hawks like Lieberman. But the question is one of degree. I mean, every viable candidate—I’m not talking about Gravel and Kucinich or Ron Paul—every viable candidate has said we have to keep the options open, meaning they are continuing the threats of military action against Iran. I don’t know if anybody cares, but there is something called the U.N. Charter, which is a valid treaty that we’re committed to which bars the threat or use of force. So they’re all in violation of the Charter and they don’t seem to care. The media don’t seem to care. I mean, the media and the political class are isolated from both world opinion and even domestic opinion. And, yes, there are some variations within the Democratic Party over this as to how extreme they are. But its, all, almost all of it is just kind of like off the wall from an international point of view, except for people like Gravel and Kucinich.

Noam Chomsky has written and lectured widely on linguistics, philosophy, intellectual history, contemporary issues, international affairs and U.S. foreign policy. His works include: Aspects of the Theory of Syntax; Cartesian Linguistics; Sound Pattern of English (with Morris Halle); Language and Mind; American Power and the New Mandarins; At War with Asia; For Reasons of State;…

A cop watcher gave an interview to a Fox reporter, then it became evidence against him