Edward Leung, Hong Kong's most prominent independence activist was sentenced to six years in prison, for having organized protests that resulted in property damage. We speak to Prof. Sean Starrs and Polaris Tang of the City University of Hong Kong

Edward Leung, Hong Kong's most prominent independence activist was sentenced to six years in prison, for having organized protests that resulted in property damage. We speak to Prof. Sean Starrs and Polaris Tang of the City University of Hong Kong 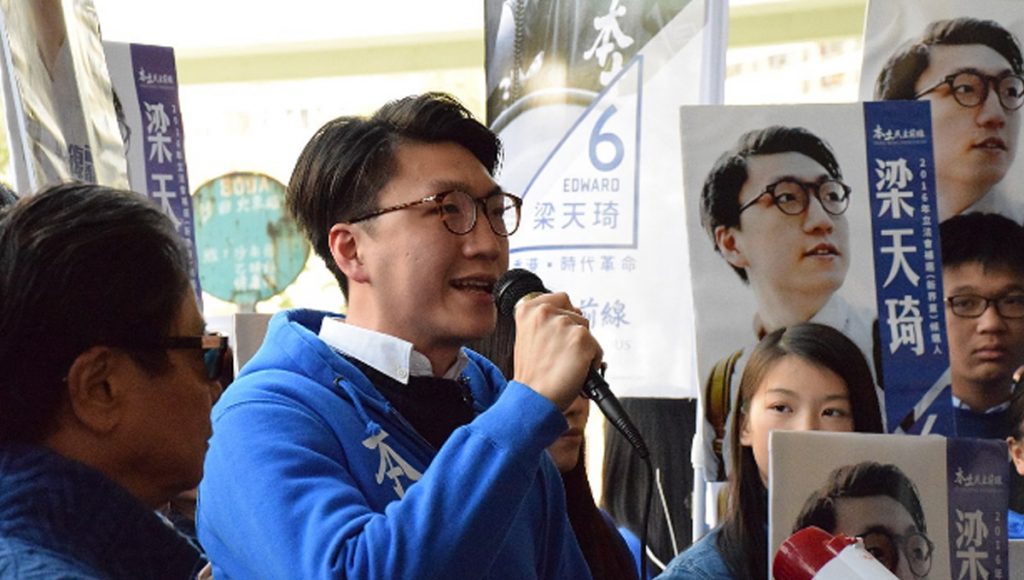 Last week Edward Leung, a Hong Kong independence activist, was sentenced to six years in prison for his involvement in riots and protests that took place in Hong Kong two years ago. Two other protesters were also sentenced to seven years and to three and a half years in prison. Even though he is only 27 years old, Leung is one of Hong Kong’s best known independence activists. Back in 2016 he ran for Hong Kong’s Legislative Council, but was barred from running. His movement, known as Hong Kong Indigenous, emerged out of the 2014 so-called Umbrella protests. Here’s a clip of Edward Leung before his arrest.

EDWARD LEUNG: I think we have to be confident that someday things will be changed. And the hard work we are doing today, some day we will get paid, even if it’s not in your lifetime, or anyone’s else’s. Yes, because I think it was the only thing we can do. And if we have already do the best we could do today, then I will be happy about it. I have fulfilled my responsibility as a Hong Kong citizen.

GREG WILPERT: Joining me to discuss what Edward Leung’s sentencing means for Hong Kong are Sean Starrs and Polaris Tang. Sean is assistant professor of international relations at Department of Asian and International Studies at the City University of Hong Kong. Polaris is a student and activist, also at the City University of Hong Kong. Polaris has been a member of the group known as Scholarism since 2012, a group that successfully campaigned for the abolition of the Sinocentric national education program in Hong Kong. They both join us from Washington, D.C. where they are on a visit. Thanks for being with us today, Sean and Polaris.

So let’s start with you, Polaris. Give us a little bit more background. Who is Edward Leung, and what has he been protesting for?

POLARIS TANG: Edward Leung is a localist activist because he wants to try for the city’s independence, and strive for the identity of Hong Kong. And he’s famous by in 2015, that’s by election of new territory east in the Legislative Council and he was famous for, he is the representative of the Hong Kong indigenous group.

GREG WILPERT: So what does his sentencing and conviction mean for Hong Kong’s independence movement, would you say, Polaris?

POLARIS TANG: I think if Hong Kong government will want to damage the young politicians to enter legislative council. Until now there are six politicians punishable by the judicial council that’s a very harsh punishment, including from the League of Social Democrats, and from Demosisto, and from Youngspiration.

GREG WILPERT: So give us some more context. Is this penalty for Edward Leung a form of political persecution? Or could there be more to it, if these protests that were organized were indeed, became violent, and some form of rioting? Or is this mainly to silence him? And if so, then is the independence movement really threatening Beijing’s control over Hong Kong? Or what is it exactly that Beijing is afraid of?

SEAN STARRS: Yeah, I think this is nothing short of Xi Jinping trying to crush the independence movement. He said as much July 1 last year, 2017. He visited Hong Kong for the first time as president of China, and he said that he will not allow anyone to cross the red line of Hong Kong independence.

So if we compare to, for example, the 1967 riots, which was, it lasted eight months. About 50 people were killed, hundreds were injured. And no one got a six-year prison sentence. So this is the harshest prison sentence that any, any activist has ever faced in Hong Kong’s relatively short history. So I think it’s a clear signal from Xi Jinping that there’ll be zero tolerance. And it’s part of his broader crackdown, both within China itself, on Taiwan, and you know, there’s all kinds of problems that China’s having now. Border disputes with almost every neighbor, and so on. You know, now increasing trade war with Trump. So he’s, he’s responding to all this by zero tolerance, complete repression.

GREG WILPERT: So turning to you again, Polaris, what do you make of the tactics that Leung’s movement is accused of using? If they do involve property destruction, and apparently he did confess to assaulting a police officer at one point, don’t they open themselves up to this kind of prosecution? I mean, wouldn’t a non-violent kind of protest be more effective?

GREG WILPERT: So, Sean, tell us some more about the degree of control that Beijing has over Hong Kong. After all, it’s supposed to be two systems and one country since 1997, when Britain turned Hong Kong back over to China. And how has the independence movement factored into Beijing’s control over Hong Kong?

SEAN STARRS: Yes. So, Chris Patten was the last British governor of Hong Kong in the early ’90s. He helped to implement what’s called the Basic Laws, sort of Hong Kong’s mini Constitution. So it guarantees a bunch of things. Freedom of speech, freedom of assembly, but also judicial independence. And so the Chinese security services are not allowed to operate in Hong Kong.

But we’ve seen over the past four or five years Beijing more and more contravening this mini Constitution. So for example, there were four booksellers that were kidnapped from Hong Kong. So Chinese security services crossed the border, which was illegal, and then they kidnapped them back to the mainland and detained them. Last, last year, the first day of Chinese New Year, they even kidnapped a billionaire, a mainlander billionaire, from his hotel room in the middle of the night. And then they’re increasingly focusing on what’s called patriotic education, which is of course what they’ve been doing in the mainland for a long time, but sort of inculcating, trying to inculcate love for the Chinese Communist Party, the great rejuvenation of the Chinese nation, the Chinese dream. So Xi Jinping has all these slogans.

So it’s, independence in Hong Kong, or the the movement towards independence, is a real threat to Xi Jinping’s power. So as probably everyone knows, Xi Jinping eliminated the presidential term limits. He now plans to potentially rule for life. And since about 2015 he’s been really cracking down on all dissent, including in the mainland. So Hong Kong is still relatively free, it’s still a beacon of activism. So lots of labor NGOs, environmental NGOs, feminist NGOs, have now, are sort of, they found final refuge in Hong Kong. So Hong Kong is the last sort of territory in China proper that you’re still, you’re still able to protest. So he’s really cracking down, I think, hard to make sure that the spirit is crushed.

GREG WILPERT: So finally, Polaris, I don’t know to what extent you are free to answer this question. But as an activist yourself, what would you like to see for Hong Kong’s political and economic future?

POLARIS TANG: I think Edward Leung’s example shows that the punishment of the Communist government will be much harsher, because there’s only the one of many examples of Hong Kong government using the law to intimidate the pro-democracy movement, and curtails the freedom of expression. So I think that there’s an unacceptable crackdown, which has a chilling effect on the pro-democracy movement, and forcing people to self-censorship, and silencing the opposition. So I feel negative of the Hong Kong political future.

SEAN STARRS: Thank you for having us.

GREG WILPERT: And thank you for joining The Real News Network. Also, if you like stories such as this one, I want to remind you that we recently started our summer fundraiser, and need your help to reach our goal of raising $200000. Every dollar that you donate will be matched. Unlike practically all other news outlets, we do not accept support from governments or corporations. Please do what you can today.