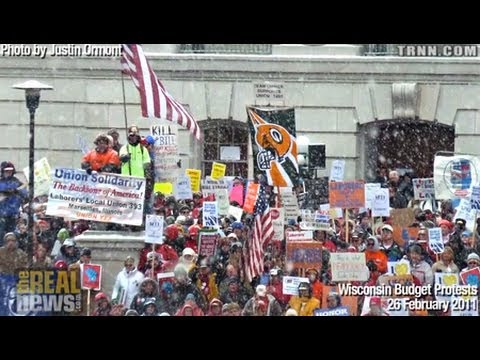 Every Monday since late April, a broad coalition of demonstrators have been organizing in Raleigh, North Carolina. They’ve been protesting the Republican majority’s legislative agenda. They are calling the protest Moral Monday. And we’re joined now by one of the organizers.

Reverend Curtis Gatewood is a coalition coordinator for the North Carolina NAACP. From 2005 to 2011, Gatewood served as second vice president of the state’s NAACP. He joins us now from Raleigh, where ongoing Moral Monday protests have turned out thousands.

Thank you for joining us, Reverend.

DESVARIEUX: We’re happy to have you on.

So my first question is based on what I’ve been reading in the mainstream media. It seems that they’ve portrayed this movement to be a bit unfocused. If you could just clear the record, what specifically are your demands?

GATEWOOD: It’s interesting. If anyone would consider our movement to be unfocused, it is very puzzling to me, because the movement is very focused. For the most part we are focused on justice, and justice sometimes will involve more than one issue.

The issue basically started around voting rights. It looks as if in North Carolina we’re having to deal with a 21st-century version of interposition and nullification, whereby in the 1960s you had a governor in Alabama who basically decided, regardless of what the Supreme Court said, regardless of what the Congress may have passed, they have decided to use their state laws or their state position to nullify or go against what the U.S. Constitution or the U.S. Supreme Court had passed. And it seemed like it’s something similar going on here in North Carolina.

For example, we have a legislature that rather than coming in focusing on jobs, considering that the last quarter of our unemployment–the last quarter of 2012, the unemployment rate was at 9.2 percent. Now, that’s much higher than what was considered to be 7.8 percent unemployment rate for the nation. We already have 1.7 million people living in poverty. We already have about 600,000 children living in poverty. Rather than coming in and focusing on jobs and focusing on ways to reduce the poverty rate, it looks as if this legislature, along now with the governor, they’ve instead worked on things that would exacerbate poverty.

Similarly, rather than focusing on jobs, this legislature decided to come in and talk about voter ID, talking about voter fraud, when there was no fraud to be found. And North Carolina has one of the best voter laws in the state. We have signature attestation. Signature attestation requires that when you come in to vote, the only thing you have to do is state your address or come in and sign your name. When you sign your name, you’re saying, if I am not Curtis Everett Gatewood, then I’m willing to subject myself to a five-year felony for lying. That has worked in North Carolina. We didn’t need voter ID. We’ve been 237 years without voter ID. Voter IDs, the laws, this voter ID law would come in conflict with the U.S. Constitution, the U.S. amendment, to the Fourteenth Amendment, to the Fifteenth Amendment, to the Seventeenth Amendment, and the Twenty-fourth Amendment of the U.S. Constitution. We feel that it’s unconstitutional. And the only voter fraud that we have now is the fraud that’s coming through bills like the voter ID bill. That’s the fraud. So that’s another example.

And this legislature has been focusing on these types of things rather than getting about the business of jobs, education, things that we know that would take people out of poverty and help people who are on the brink of poverty, allowing them to succeed. Rather than doing those types of things, we’ve been tampering around now. We have about six voter suppression bills that have been drafted.

We have similar legislation. They’re trying to undermine public education. We have a tax–the elimination of a tax–earned income tax credit, which would cause 900,000 North Carolinians to be–taxes would go up while giving tax breaks to 23 millionaires here in North Carolina.

These are the types of draconian laws that we’re having to deal with. I could go on. I don’t think your show is long enough.

DESVARIEUX: I understand. And you do have a long laundry list, yes.

GATEWOOD: So we know very well why we are here protesting, and we know very well why we need to reach now to a moral Monday, moral Tuesday, moral Wednesday. We need to bring morality back to the state, because the morality of a state or a society can be best measured on how it treats those who are amongst the least, those who are most vulnerable. And the draconian law, the barbaric laws that are coming out of the legislature and now being [incompr.] to come across the desk of the governor–and the governor has pretty much–has given us no indication that he’s going to not sign many of these bills, and the bills that have already been signed are in fact–the unemployment money’s been denied that–a half million people who’ve been denied Medicaid when the money was there. We already have the tax increase on 900,000 poor working people in North Carolina while giving tax breaks to the 23, that just only 23 millionaires have got a tax break out of the deal while punishing the other 900,000 North Carolinians. Those bills already passed. So I’m just saying we know full well why we are here.

DESVARIEUX: Let me just jump in for a second, Reverend, because there have been some comparisons made between your movement, the Moral Monday movement, as well as what happened in Wisconsin. And I just want to get a sense from you, are some of those comparisons justified? And what makes your movement unique?

GATEWOOD: They can be compared through the fact that people decided to stand up when the people who had been elected were not doing the business of the people. In Wisconsin, where you have people who are trying to punish those people who belong to unions and trying to dismantle unions rather than coming and providing jobs and making sure people had livable wages and making sure people had the best working conditions, instead of doing that, you’re trying to take away the leverage that the working people actually had. That should cause concern, that should cause protest, that should cause the good people coming together. So in that way it is similar.

But where we may be a little unique is here in North Carolina, through what we call each HKonJ, where I serve as HKonJ coalition coordinator–is the acronym for Historic Thousands on Jones Street, where through the leadership of Reverend Barber, when he was elected in 2005, about a year later he pulled together some of the best experts around the state, those who were experts in public policy, who were experts in the law, who were experts in labor and political science, and brought people together from around the state, put together coalitions centered around a 14-point agenda. And pretty much the agenda can be broken down into categories such as equity in education, or economic sustainability, or criminal justice, in other words, equal protection under the law, health care for all, and voting rights. Around those points we brought people who came from across the state, whether they were heads of denominations and churches. We have, like, the AME Zion Church, the General Baptist State Convention. You have the labor organizations from around the state coming together. We have black, white, Latino organizations who are part of this coalition which consists of about 150 organizations. Altogether we’re talking about about 2 million people who are working as a coalition with the North Carolina State Conference of the NAACP.

So we were here already dug in. We are already here knowing that this is not a moment for us; this is the movement that we–we were here working–we had already worked on legislation that had passed through this coalition, such as same-day voting, the Racial Justice Act, which was passed in 2009. We were already–based upon the work, already here on the ground.

So when this particular regime came into office, we were already here working together as a community, black, white, Latino, other people of goodwill, people who use the Bible for reasons other than to beat homosexuals over the head with the Bible, but actually using the Bible as a source of love, as a source of reaching out to people who are amongst the least, as Jesus asked that we do. And so we were already here using Bibles and using the Constitution and using history in a way that would uplift our community. So we were positioned. And so I think we have been underestimated by this legislature and by this government. And we do not plan to go anywhere, because we’ve always stood around the theme forward together and not one step back.

DESVARIEUX: As you said, you don’t have any plans on going anywhere, and there is a planned action every Monday. Is this indefinite? And we’ve already seen there have been numbers of arrests. Last week it was in the 80s; previously, 150 people arrested. Talk a little bit about your future plans.

GATEWOOD: Yes. Yes, so far we’ve had several arrests here, and that is an example of the dedication of people who are part of this what we call love and justice movement, a forward-together movement. We are working forward together. And so, as a part of that, on April 29 there were 17 of us arrested, along with Reverend Barber myself and 15 others. And that’s basically what started the arrests, after we were arrested. And people were wondering, why, of course, would we have been arrested.

So if we were there in our house at the North Carolina General Assembly, at legislature, which is, of course, our house, there in a nonviolent manner–we were there demanding justice. We were holding up signs. We were singing songs. We were praying. Many of the signs we held up had scriptures, such as woe unto those who make unjust laws, which comes out of Isaiah, the tenth chapter, other scriptures, such as as much as you’ve done unto the least of these. And then we also had–we held up our five major areas of focus, such as economic sustainability, education equality, criminal justice, health care for all, voting rights. Those were the types of signs we were holding. No one was threatening to do any violence or hurt anyone. And so by the 17 of us being arrested on April 29, there were others who wanted to come back and be a part of this particular movement.

DESVARIEUX: Well, thank you so much for joining us, Reverend. And we’ll certainly be following up on this story.