Obama has quietly approved the Alberta Clipper, a cross-border pipeline between the U.S and Canada that will connect with the southern half of the Keystone XL pipeline, say journalists Steve Horn of DeSmogBlog and Cherri Foytlin of bridgethegulfproject.org

Obama has quietly approved the Alberta Clipper, a cross-border pipeline between the U.S and Canada that will connect with the southern half of the Keystone XL pipeline, say journalists Steve Horn of DeSmogBlog and Cherri Foytlin of bridgethegulfproject.org 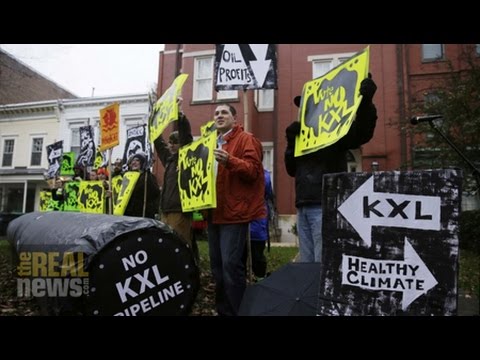 The Senate voted against the controversial Keystone XL pipeline in a 59-41 vote this afternoon. Will this be the end of it? If the Republicans and some Democrats have their way, likely not. The Keystone XL, if it were built, would carry 830,000 barrels of highly corrosive and polluting tar sands extracted in Alberta, Canada, to refineries on the Gulf Coast in Texas.

Now joining us to discuss the decision are our two guests.

Cherri Foytlin is joining us from Rayne, Louisiana. She is a freelance journalist and photographer and a contributor to BridgeTheGulfProject.org. She is the founder of Mothers Gulf project.

Also joining us is Steve Horn. He is a journalist based in Madison, Wisconsin. His work has been featured in The Guardian, The Nation, and Truthout. He’s also a research fellow at DeSmogBlog.

So, Steve, let me start with you. What are your feelings about the vote this afternoon?

STEVE HORN, RESEARCH FELLOW, DESMOGBLOG: Well, yeah, you know, I think that the vote was kind of a fascinating display of many things going on at the same time. So on the floor right before the vote today we had Senator John Hoeven, who was a cosponsor of that bill, the Republican from North Dakota. He gets on the floor and actually gave an important lesson that I think a lot of environmentalists need to hear, and that’s that–he talked about the–distinguished between the southern half of the Keystone XL Pipeline, the northern half of the Keystone XL Pipeline, and the original Keystone Pipeline and showed the whole map.

I think people too often forget that there are two halves of the Keystone XL pipeline, first of all, and there’s the original Keystone pipeline that President George Bush authorized in 2008.

And what we had today was a vote, a negative vote, a downvote for the Senate for the northern half of the Keystone XL pipeline. But we shouldn’t forget that often environmentalists still talk about President Obama’s–they use the word climate legacy. And part of his climate legacy is the southern half of the pipeline that goes from Oklahoma down to Texas that he approved of via an executive order in March 2012, when he was running for president against Mitt Romney. And so it was important that this was voted down today by the Senate, just like it was important that the House voted it up. It’s an important dialog about the tar sands and pipelines.

But I think that we should not forget that while that’s happening, there’s also an Enbridge pipeline that President Obama authorized that’s a border-crossing one. And he did it sort of secretly and didn’t go through the entire process the Keystone XL northern half is going through, and that’s called the Alberta clipper. And that one, it brings oil through other pipelines down to the Gulf. And so we’re talking about still quite a bit of oil that’s able to get down to the Gulf through most of what is the Keystone pipeline system that can TransCanada owns and Enbridge’s system–its Keystone XL clone, as I’ve called it.

So today was somewhat of a positive moment, but we shouldn’t let it cloud the fact that all this other stuff has happened under the watch of both President Bush at the end of his term and now under President Obama in his first term and a half.

PERIES: Cherri, how are you receiving this vote, sitting on the Gulf?

CHERRI FOYTLIN, FOUNDER, MOTHERS’ GULF PROJECT: Well, I totally agree. I mean, there’s the Energy East Pipeline that they just filed for here last week or the week before. That’s going to be a huge pipeline that’s heading towards the east side of Canada. And then will be barge-shipped down directly to Houston, so directly to the same refineries and the same communities that are going to be impacted with the Keystone pipeline. So whereas I’m thankful that it didn’t go through, there’s still very much concern for the communities here in the Gulf Coast that are going to be impacted healthwise, ecologically in our area.

PERIES: And, Steve, can you tell me what do you think will be the next steps that the Republicans will take?

HORN: Well, I think that the Republican Party is once again, in 2015, as soon as they have what they think is the veto-proof majority in the Senate, we’ll see this same exact thing happen, where there will be both a House-side and a Senate-side push to ram through that northern leg of the Keystone XL Pipeline.

What I fear is that while this happens over the next two, three, four, five months, we’ll still not have a discussion about what’s happening with Enbridge’s Keystone XL clone, as I’ve called it in my reporting.

But just as importantly, down in the Gulf right now, in the Houston Ship Channel, there is lots of activity around the potential for re-exporting that Canadian tar sands to the global market. And just while this–here’s an example. In the past week, we’ve heard quite a bit about the Keystone XL northern leg of the pipeline. We probably didn’t–we didn’t hear much of that the fact that this company named Oiltanking was–that’s a huge terminal-owning company–was bought up by Enterprise Products. Enterprise Products with the was the first company, earlier this year, to get a permit to export oil condensate. Not only that, Enterprise Products is also the co-owner, 50 percent basis, with Enbridge, of the twin pipeline that runs from Cushing down to the Gulf Coast. And that’s that third leg of that Keystone XL clone pipeline that Enbridge owns.

And Oiltanking is quite a big company right now for fossil fuel exports in general. They own a terminal in Louisiana in Davant called the United Bulk Terminal. That’s exporting coal right now from the Mississippi River.

And, furthermore, the Keystone XL is still part of this discussion, the southern half. That’s why it’s important to distinguish between the northern and the southern half. They have something called the Houston Lateral pipeline that’s kind of a fork in the road. Part of the Keystone XL southern half goes to Port Arthur or Beaumont. The other part of it goes to the Houston Ship Channel. And that is connected to Oiltanking’s terminal that was just purchased by Enterprise Products. So we’re going to see not only a big public discussion of the Keystone XL pipeline–and that’s mostly for public consumption, while, you know, in the Gulf Coast there’s this big, robust push right down to export not only tar sands, but also oil that’s obtained from fracking. And I think that if we only talk about the Keystone XL northern leg, we’re missing out on a lot of important stuff that’s happening down in the Gulf.

PERIES: And, Cherri, what about people in the Gulf who’ve been actively organizing against this because they were the recipients of the BP oil disaster and they know what it is like to live with these kinds of disasters? And according to the State Department’s report itself, they could expect up to hundred spills from this pipeline alone along the way. Now, how is this report being received, and what do you think will be the next steps for you on the ground there?

FOYTLIN: Yeah. That’s what I’m most concerned about is just the human impacts and the health effects. I mean, we saw what happened with BP.

And by the way, it was no surprise to us that Mary Landrieu was all over. I mean, this woman in this election alone has taken about half a million dollars worth of contributions from the oil industry. I don’t think that it was any accident. I don’t think she was trying to beat Bill Cassidy, as a lot of people have speculated. I think she was trying to secure her spot as working for the oil industry after this is all said and done. She’s going to be a great lobbyist, because she’s been lobbying here in the Gulf for quite some time.

But my big concern and a big concern for people here is that we think it’s time to go fight tar sands at the source. We need to shut down tar sands completely. The health effects in Fort Chip, for instance, you know, 30 percent higher rates of cancer there–and then you get down to the Houston Ship Channel, and in Port Arthur you’re looking at 20 to 50 percent higher cancer rates. In that way, this–. And then, you know, it’s carbon-intensive. You know, I feel like this whole–the tar sands completely needs to be shut down, and whereas we’re thankful that the northern leg didn’t go through, because we’re thinking about property rights, and we care about the people up north and the communities it’s going to go through, and it potentially may leak. But we’re also very much concerned with the effects it’s going to have on the–happen to refining communities here.

PERIES: Right. Cherri, Steve, both, thank you so much for joining us.

Cherri Foytlin is a freelance journalist, photographer, and mother of six, who lives in South Louisiana – an area inundated with industrial pollution. She is the author of “Spill It! The Truth About the Deep Water Horizon Oil Rig Explosion,” and regularly contributes to www.BridgetheGulfProject.org, the Huffington Post, Daily Kos, and several local newspapers. In…