The prize is important because it can help overcome the referendum vote against the peace agreement, says Cristin Espinel of the Colombian Human Rights Committee

The prize is important because it can help overcome the referendum vote against the peace agreement, says Cristin Espinel of the Colombian Human Rights Committee 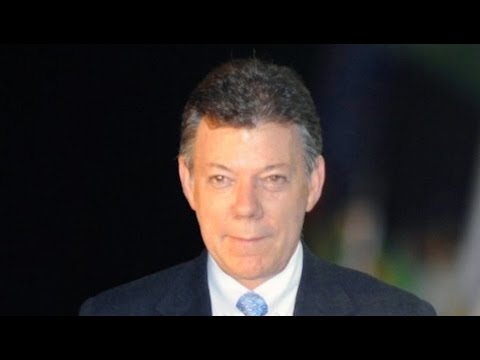 GREGORY WILPERT, TRNN: Welcome to The Real News Network. I’m Gregory Wilpert, coming to you from Quito, Ecuador. Norway’s Nobel Peace Prize committee announced on Friday that President Juan Manuel Santos of Colombia is this year’s recipient of the peace prize. He receives the prize for his work on a peace agreement with the Revolutionary Armed Forces of Colombia, or the FARC. Let’s take a look at what the Nobel Committee chair, Kaci Kullmann Five, had to say when she announced the winner:

KACI KULLMANN FIVE: The Norwegian Nobel Committee has decided to award the Nobel Peace Prize for 2016 to Colombian President Juan Manuel Santos for his resolute efforts to bring the country’s more than 50 year-long civil war, to an end. A war that had cost — has cost the lives of at least 220,000 Colombians and displaced close to 6 million people. The award should also be seen as a tribute to the Colombian people who, despite great hardships and abuses, have not given up hope of a just peace. And to all the parties who have contributed to this peace process.

WILPERT: She went on to acknowledge the fact that the peace agreement was not over because just a week earlier, a narrow majority of Colombians voted against the agreement in a referendum.

Joining us from Washington DC, to talk about the Nobel Peace prizewinner and the future of the peace agreement in Colombia, is Cristina Espinel. She is one of the founding members of the Colombia Human Rights Committee and a representative of the Campaign Si A La Paz in Washington, D.C., thanks for being on The Real News, Cristina.

WILPERT: Let’s start with who is President Juan Manuel Santos? Do you think he deserves the Nobel Peace Prize for negotiating the agreement with the FARC?

ESPINEL: President Juan Manuel Santos is the 32nd that is serving Colombia. I think this negotiation has been very difficult. Not only for the government but for the FARC because they’ve been fighting for many years. Finally, after 4 years maybe 6 years of negotiations, they signed the agreement in Cartagena. I think this is very important and I think President Santos and the people in Colombia who are in favor of peace, deserve this Nobel Prize.

WILPERT: Normally, the prize gets awarded for the actions that are specifically named in the award itself, but can you say a little bit more about Juan Manuel Santos? I meant, he was Defense Minister under the previous president and he was usually always perceived as a bit of a hawk. How do you think that fits with his receiving the prize? What was his role, in other words, before he became president?

ESPINEL: Well, yeah, before he became president he was the Minister of Defense. He fought very hard to defeat the FARC. And then he became president he started to see how he can start the negotiations with FARC. At the beginning it was secret negotiations, but at the end, everybody relies everything when they started to announce that they are talking about peace with the FARC.

WILPERT: Let’s turn to the agreement itself. It was narrowly defeated in a referendum, as I mentioned in the introduction, last week by less than 54,000 votes out of over 13 million that were cast. Also, abstention was very high at 63 percent. What do you think does this low participation rates say to you about the agreement and the fact that a large majority of Colombians actually did not vote at all and in the end only 18 percent, approximately, voted against the agreement?

ESPINEL: Unfortunately, this is the history of Colombia: always high in abstention. This has always been the same, I don’t know what is going on with my people but we have to wake up and start to think different because if we do not participate, we are going to receive the consequences that we are suffering now. We don’t vote and now we are in this situation. Fortunately, the people in Colombia, the people who vote for peace in Colombia and the people around the world, we are doing demonstrations and supporting peace in Colombia. I understand that in different parts, people who voted “no” are also participating in the demonstrations.

WILPERT: That’s interesting. One of the things that recently came out in the Colombian press is that the strategy the “no” campaign used in order to convince people. Can you tell us a little bit about what that strategy was? What did they do and why was it successful?

ESPINEL: Yeah, the “no” campaign really don’t use the truth because they say things like, the government is going to take money away from the retired people to give to the FARC. The other thing is that they are going to keep the country to the Castro-Chavez move. The other thing was, because Colombia is a very religious country, they used the part of gender — to respect all gender and all ideas — they think its difficult for people to accept the homosexuals and the people from the LGBT and there was a lot of things around that. They lied about things that children in schools are going to become homosexuals because they are going to allow people to do that. It’s a very ignorant country, not everybody, but a lot of people. I talked to somebody yesterday and they said that Colombia is still the same as in the 20th century. That we have move and update, that we have to move to the 21st century now.

WILPERT: What do you think that this says also about the “yes” campaign? It sounds like it was not particularly effective. They didn’t seem to follow much of a strategy. What was your impression?

WILPERT: One of the individual organizations that seemed to have gotten a lot of press in Colombia and also internationally were, Human Rights Watch. Tell us a little bit about their role, basically, they didn’t come out and say that people should vote against the agreement, necessarily, but they said they were very questioning of the agreement. What was their role and what impact did that have?

ESPINEL: I think the main point was the point of justice. Because in transitional justice, the main punishment is not jail. Jail is not the only way you can apply that’s why they call it transitional justice, there’s different ways to get these people to [inaud.] impunity. But the main thing is that a lot of organizations in Colombia especially the human rights groups, they are very upset because they believe that Human Rights Watch do not have any respect for the groups in Colombia. They are really upset about this situation.

WILPERT: What do you think will happen now? Both sides have said that they will return to the negotiations table to find a way forward. What do you expect to happen?

ESPINEL: I think all the people in Colombia, we want peace because not one of us know what that is. We all live in this world, we don’t what is peace. Maybe because we don’t know what is peace that some people are against peace but everybody wants peace and we expect that we reach this agreement because this agreement is not perfect. But no agreement is perfect. But we need to go ahead and we have to reach the peace in Colombia and now with this Nobel Prize, I think it’ll give us a little strength to continue because we need to get there.

WILPERT: Thanks so much, Cristina, for having joined us on The Real News Network.

WILPERT: And thank you or watching The Real News.

Cristina Espinel is one of the founding members of the Colombia Human Rights Committee, founded in 1981. She is a representative of the Campaign Si A La Paz in Washington DC.