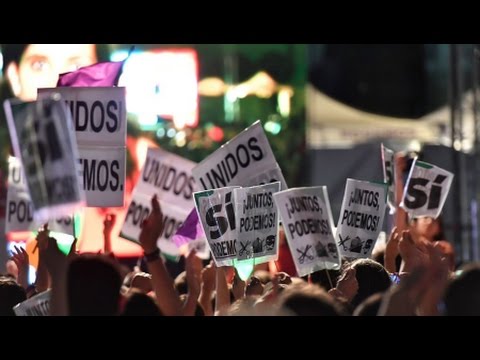 Last week, Spain held its second parliamentary elections in 6 months. None of the parties contesting were able to reach the required 176 seat majority to govern. After failing to put together a coalition government last December, the acting Prime Minister Mariano Rajoy of the Center Right People’s Party is in the same situation today as he was then. Although PP won the most seats but still fell short of that majority. The Leftist Party renamed United We Can, Unidos Podemos, won almost exactly the same number of seat as they did in December election. The conservative popular party gained the most this time around but still not enough to form a government.

Joining us now from Barcelona, Spain to discuss all of this is Carlos Delclos. He’s a Barcelona based Sociologist and writer from Houston, Texas. He’s a collaborator from the Health Inequalities Research Group at the University of Pompeii Fabra and he’s also an editor with ROAR Magazine and author of the book Hope is a Promise: From the Indignados to the Rise of Podemos in Spain.

Thanks for joining us Carlos.

CARLOS DELCLOS: Thanks for having me.

PERIES: Carlos for a while leading up to this election, Unidos Podemos, the new left party, reached—had just recently joined forces with the United Left which itself is a coalition or a unification of various left parties was surging in the polls. They were in a position to overtake the Socialists Workers Party and they might’ve been able to appoint the next Prime Minister of Spain. But that didn’t happen. Why?

DELCLOS: Well it didn’t happen because polling happened and statistical modeling happened. Basically the projections that had Unidos Podemos surging and rising to second place in the election were based on the idea that the United Left voters would naturally flock to and support this coalition with Podemos. It’s not entirely clear that that happened. It seems not to have happened. Previous surveys did show at least the one carry out by the center for sociological research showed that people that supported United Left were not all that—did not view the pack of Podemos all that favorably. So to assume that they would naturally gravitate towards that instead of obtaining, seems to have been erroneous.

However, at the same time, it’s still unclear what happened. There’s a lot of different hypotheses kind of floating around right now. Another I think resonates sort of with the experiences that I’ve seen and just kind of the facts of the matter is that the campaign was relatively low key. It didn’t have as much hype behind it as the December elections had. That campaign was very vivid on the part of Podemos and this one was again much more low key. It was also very much more defined by sort of left wing–I guess a left wing aesthetic that the previous one didn’t really have so much which I guess was brought by the United Left coalition–their participation in it.

So these are all kind of all ideas kind of ideas that are floating around as to why this may have happened. But the fact of the matter is, the big story that abstention seems to have really have helped hurt Unidos Podemos and in the case of Partido Popular, basically the people that had voted for the central right Citizens Party or the new upstart Citizens Party, they did not vote for Ciudadanos this time or Citizens this time and voted for Partido Popular. And then also they may have mobilized—Brexit may have mobilized fear amongst Partido Popular voters who some of who abstained in the previous elections and forced them to vote for fear of the Podemos government.

So I think it’s a lot of factors but that’s just a few of them.

PERIES: So the party that won the most votes, Popular Party of Mariano Rajoy. Now that party has been dogged by corruption scandal after corruption scandal and recently he had also been held responsible to some extent of the country’s sluggish economy and high unemployment and all of these things that Unidos Podemos have been organizing around in terms of issues but yet they gained most of the votes. Why?

DELCLOS: The reason that they gained more votes, let’s say is because they have–they have a very resilient sort of base that tends to vote for them. There’s also the age composition. Spain is a country that is affected by population aging quite strongly and it’s a place where pensions are perceived as pretty much endangered by EU austerity so that may mobilize older voter more. Especially in the aftermath of Brexit. Then on the other hand, there’s a joke going around that maybe Podemos should’ve been more corrupt because it seems to have been favored in the ballot boxes.

Spain does have a long history of corruption in the government. At least in its recent history and Partido Popular sometimes it just seems like they’re immune to it. So I think it just didn’t have as big as an effect and people sort of went with what seemed safe. I mean Partido Popular, it wasn’t under them that the largest spike in unemployment happened. That happened under the Socialists because that’s when the financial crisis hit. So people may not necessarily associate unemployment with Partido Popular. In fact, unemployment in terms of the unemployment rate, has actually gone down in recent trimesters in Spain, albeit mildly and albeit without necessarily meaning that poverty is going down for instance or vicariousness is going down.

So that exists. There’s a possibility of a government. But one of the things that’s quite clear is that Span’s political party system has turned into a multi-party system. So this is a period during which—it’s going to be quite difficult to maintain stable governing coalitions. And that’s one good reason that it would make sense for the Partido Popular and PSOE to pack together. However, that’s going to be very costly in all likelihood for PSOE because PSOE hasn’t reached the same fate as PASOK in Greece for instance because they’ve managed to maintain a certain degree of polarization with the PP. So that’s not quite clear what’s going to happen.

PERIES: So what’s next or Unidos Podemos. And I also want you to explain to us whether the Brexit discussion that was going on leading up to the Spanish elections had any impact. Particularly on how Podemos did.

PERIES: And what was Unidos Podemos position on the EU?

DELCLOS: Well Podemos position on the EU is one of confrontation with the Troika. That’s the idea. The idea, Pablo Iglesias has stated several times that Spain is not Greece. We have a much larger economy. We have a little bit more bargaining power than them. So we don’t have to assume that what happened to Greece is going to happen to Spain. There is kind of with the [inaud.] kind of movement. There’s this kind of idea and with Corbyn in the UK there’s this idea that an anti-austerity left, all across Europe is something that could be happening.

But at the same time Podemos’ position is one of confrontation with Europe but not one of leaving. So at the same time they’re not openly against leaving. So that does seem to be something that they’re toying with a as a threat against the Troika. So if that’s the case and if people are scared of that then that might’ve had an influence.

PERIES: Alright Carlos I thank you so much for joining us today and we hope to have you back as we will follow what’s going to evolve over the next few days over how the government will be formed. Thanks for joining us.

DELCLOS: Great. Thanks for having me.