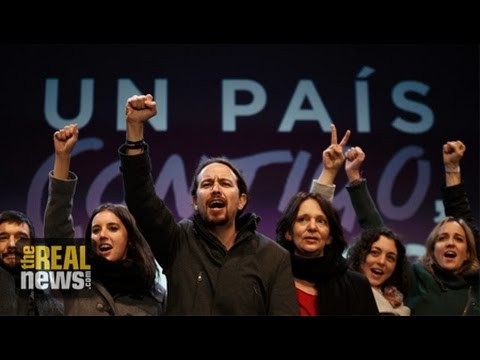 73 percent of Spanish voters turned out for general elections on Sunday. Current prime minister Mariano Rajoy’s center-right party, Partido Popular, won 123 seats in the 350-seat congress. The center left party, Social Worker’s Party, ended up with 90 seats. And two young parties, the leftist Podemos and the Liberal Citizens Party, won 69 and 40 seats, respectively. Although not one party can claim a majority, many are seeing the left-wing party Podemos as the big winners since they were able to break the traditional two-party system.

Now joining us to give us some context is our guest, Carlos Delclós. He’s a sociologist, researcher, and editor for Roar magazine. Thank you for joining us, Carlos.

CARLOS DELCLÓS: Thanks for having me.

DESVARIEUX: So Carlos, in your recent piece, you argue that Spain, which is the eurozone’s fourth largest economy, is threatening to become ungovernable. What do you mean by that?

DELCLÓS: Well, I mean, I think that specifically what I’m referring to is that it has become impossible for a kind of two-party pact coalition government to form a government, because the Partido Popular and the kind of upstart liberal party Ciudadanos do not have enough votes between the two of them to form a majority, nor do Podemos and the socialist party. Rather what we have is either a situation where the socialists, Podemos and Ciudadanos, are going to have to join together, which is unlikely but still a possibility in terms of just the arithmetic. Or we’re going to have to see some pacts that are a lot more complex and incorporate a lot of actors.

So specifically when I say that Spain’s ungovernable what I mean is that any coalition is going to be fragile because it is split by three different dichotomies. On the one hand you have the left-right dichotomy. On the other hand you have the old and new. The old, two-party parties and the new upstart parties who basically, you know, rose based on a critique of those parties, of the traditional parties. And on the third hand you have a situation where there are centralist parties that defend the unity of Spain at all costs, and nationalist parties belonging to regions that are either calling for more autonomy or directly calling for independence, as in the case of Catalonia.

So any coalition is going to have to be centered on navigating these three sets of polarities, let’s say. And that’s a situation that is extremely complex.

DESVARIEUX: Okay. Let’s sort of break down the vote, because many people aren’t very familiar with Spanish politics. Can you speak to what interests support different parties?

DELCLÓS: Sure. So to understand the sort of, the party system in Spain, the first thing you have to understand is that the dictatorship, Francisco Franco’s dictatorship, ended in 1975 with his death. And ever since then there were just basically a few old actors that, that handled Spain’s transition to democracy and tried to keep it as relatively conflictless. The two main players in that were the conservative Partido Popular and the center-left Socialist Party. Those two have been around since the inception of democracy and have basically alternated control of the Spanish government in one way or another.

What we’ve seen now is that after those two parties got caught up in a lot of corruption scandals, after an immense housing bubble that neither of them were able to burst in a safe way or even prevent, Spain was immersed in a deep crisis that was not only economic due to the, you know, global financial crisis as well as the housing crisis in Spain, but also what people have called a regime crisis. A crisis of legitimacy of the old actors, where they were simply not porous to the demands of citizens during, you know, the times when the Troika was calling for more austerity and the majority of the population were against it.

So in that situation, around 2011 a social movement broke out called the Indignados movement and was calling for more direct democracy, real democracy, like an Occupy in the United States, but on a much, much larger scale and a much more, let’s say, daring and active scale due to Spain’s longstanding history with direct action-style politics. We shouldn’t forget, for instance, that cities like Barcelona, for instance, were anarchist for a long time. For a few years, at least.

In any case, that’s the scenario through which the regime crisis announces itself. And in the following elections the support for the two parties starts to decline. Eventually in 2014, this is kind of, the situation is increasingly deteriorating, but the social movements have less and less influence on those actors. A new party arises called Podemos, which is born out of a local access TV show that was very popular on the internet. It’s kind of like if the Real News or something like that decided to start a political party, you know, just to understand ourselves. So they launched this initiative. And you know, provided a space at the same time for the, people close to the Indignados movements to kind of develop a common narrative. And so then they kind of entered politics through the European elections.

So what’s happened now, about a year and a half later, we have a situation where the, you know, there’s a big age divide in support for the parties, where people that are over 65, for the most part, support the popular party, and that’s where the bulk of their, that conservative party’s support comes from. You have another older generation of left-wing, you know, ex-industrial workers and so on supporting PSOE, the socialist party. And then you have people that have been affected by the crisis, young people, people that are under 35, among whom Podemos is by far the top choice. Because they’re speaking to the situation of, you know, 50 percent youth unemployment. They’re speaking to the situation of precarious employment even for those who do get employment later on. And they’re the ones that, you know, articulate an entire vocabulary and a grammar for interpreting Spain’s economic crisis, its crisis with the EU, and the regime crisis facing Spain at the moment.

On the other hand, Ciudadanos steps into the gap that Podemos opens up when they enter politics, and sort of try to scoop up the centrists through a non-ideological discourse. And you know, surveys and polls had them, you know, rising really rapidly and in fact overtaking Podemos. But as Sunday’s election results show, voters ultimately opted for the real thing and not this kind of artificial construct that Ciudadanos really was.

DESVARIEUX: Okay. Let’s talk a little bit more about Podemos and their agenda, Carlos. We have a clip here of Podemos leader Pablo Iglesias talking about his party’s next step. Let’s take a listen.

PABLO IGLESIAS: Regarding the [inaud.] we are now thinking about negotiation. We are thinking about a historical compromise in our country in order to lead a new political transition. Regarding Europe and our message to Europe, it’s very clear. Sovereignty is the main [word] for us in order to organize our political system. Never again, never again Spain as a periphery of Germany. We are going to work in order to retake the meaning of sovereignty in our country.

DESVARIEUX: So we just heard Pablo Iglesias there, Podemos leader. He was saying sovereignty. What does he mean by that, when he says sovereignty, Carlos?

DELCLÓS: Well, sovereignty in the scheme of Podemos and in the Spanish context in particular takes on many layers of meaning. The first being with respect to the, the regions of like Catalonia, the stateless nations of Spain, Catalonia, Galicia, the Basque region, where, this is where Podemos win, really. That’s where they’re the top force, specifically in the Basque region and Catalonia. In Galicia they had an extremely strong showing as well.

So they’re there talking about sovereignty in a broad sense, in a sense that challenges the powers of the central state that just seeks to impose an identity on regions that have a different identity. At the same time, even throughout their Catalan, you know, their Catalan campaigns, and in the discourse of the people that are in Podemos, sovereignty is basically you control over the material situation of your local reality.

So what does this mean in the context of Europe? Well, it means that they’re not going to accept the impositions of the Troika. Pablo has said several times in interviews in Spain that Spain is not Greece, that we are in solidarity with Greece, but Greece is a much smaller economy, a much smaller part of the European economy than Spain is. Spain is Europe’s fourth-largest economy and it has a much larger population. So something like, you know, a euro exit or something like austerity, these things are going to have to be negotiated much more seriously with Spain because of the implications of a Spanish exit.

DESVARIEUX: Understood. Okay. So considering what their agenda is, do you see it actually being possible? Can change really come through Podemos at the end of the day, when–you mentioned 50 percent unemployment for youth. Should they be looking to Podemos to really be that catalyst for change?

DELCLÓS: I think there’s a difference between Podemos being a catalyst for change and Podemos being the change. And Podemos emerges because one change already took place, which is the change announced by the Indignados movement starting on May 15, 2011. What they managed to do is impose a new cultural framework that reinterpreted the crisis as an issue of democracy and not one of, you know, scapegoated minorities like immigrants or, you know, other persecuted populations.

So Podemos is a manifestation of that broader change already. They are also a manifestation of a frustration on the end of those movements to actually, you know, be able to carry out the changes that they propose due to an institutional glass ceiling. So as that sort of, as a manifestation of that, with those sort of nuances, I would say I think Podemos, what they can do is open up or be, or break down certain barriers to political and economic change in Spain, certainly. But they can’t be the change. The change is something that depends on the people themselves, on how they want to organize, on whether they know how to manage the disillusion that will certainly happen much, much like what happened with Greece with Syriza, once institutional logic, the fact that they are not necessarily a governing majority.

When these things start to reduce their capacity to enact change, what matters is how do social movements, how do Podemos, how do, how does anybody that’s interested in emancipatory change organize the disappointment, organize even the feelings of hopelessness, that can arise from the unmet expectations, which are high? How does that happen, and how do you prevent the scapegoating, reactionary right from scooping it up and turning it into something disastrous?

DESVARIEUX: Those are some very good questions and we’ll certainly keep following this story. Carlos, thank you so much for being with us.

DELCLÓS: Thank you for having me.

Trump and the Rise of the European Right, with Reps of UK Labour Party, De Linke, Podemos, and Syriza