The issue not just nationalism, but the struggle for more democracy against austerity and EU institutions, says Roar Magazines editor Carlos Delclos

The issue not just nationalism, but the struggle for more democracy against austerity and EU institutions, says Roar Magazines editor Carlos Delclos 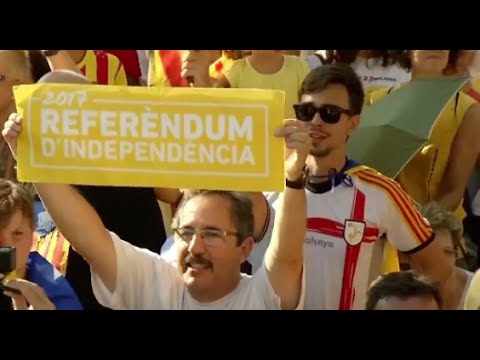 Nearly a million Catalans gathered in five cities across the northeastern region of Spain, including Barcelona. They were waving constitutionally-banned Catalan independence flags to music symbolizing the rhythm of a heart beating for an independent republic. In Barcelona alone, police estimated 450,000 people at the mass rally at Catalonia’s National Day. The pro-independence local assembly vows to press ahead with the plans to form a new state by 2017, raising pressures on leaders in Madrid to respond at a time of disarray in national politics. Two inconclusive general elections have left Spain without a new national administration for more than 8 months now. In part due to squabbling among parties over how best to counter or defuse Catalonia’s separatist challenge.

Now joining us to discuss these developments is Carlos Delclos. He is a sociologist, researcher, and editor or Roar Magazine. Carlos thank you so much for joining us today.

CARLOS DELCLOS: Thanks for having me.

PERIES: So Carlos, describe the day, the debate especially that’s going on in Spain over Catalan and what is this Independence Day celebration all about? Why is it so important to the people gathered there?

DELCLOS: Well, it’s the national day of Catalonia basically, and it’s the day that where people have historically celebrated Catalan culture and donned the Catalan flag, the regional flag, for several reasons. Just to kind of celebrate their own culture which under Franco’s dictatorship was heavily repressed, and just not allowed to speak their language as part of this national Spanish discourse and regime. Starting in 2012, however, the protest started to take on however–the celebration started to take on a more protest-like air, and this was largely in response to Spain’s, frankly, their incapacity to negotiate Catalan regional autonomy. The incapacity of Spanish courts to recognize that autonomy, and the failure of successive Spanish governments to deal with Catalonia’s quite reasonable demands for a certain degree of independence for a really long time.

So when this started to become a bigger issue, was around July of 2010, I believe, it was when the constitutional court basically declared that–they ruled against Catalan autonomy and independence of the time. So starting in September of 2012, the Catalan national assembly started to really gain a lot of power because it saw a substantial amount of support from previous actors who had not really been involved in the independence movement prior to them. Most notably the right wing nationalist [inaud.] party which was in the government at the time.

So this really put it on the map, and so the combination of Spanish repression and the mainstreaming of independence disputes has produced a situation for where the last five years we’ve seen these protests which are really large. They have an advantage of happening on a national holiday, but they’re very large, and we’ve seen report for independence reach about really close to half of the population.

PERIES: Now there is a huge leadership crisis going on in Spain with two inconclusive elections and none of the parties running want to really stick their neck out over the issue of Catalan independence. So how unpopular is the demand for Catalan independence in other regions of Spain?

DELCLOS: Well the demand for–quite reasonably the demand for Catalan independence is not a priority for most of the rest of Spain. However, it’s an extremely touchy issue because Catalonia is Spain’s richest region. It’s also a region that historically does have a legitimate claim to this independence. The other political parties, it’s not true that they’re not willing to touch the issue. Podemos, the upstart left wing party and their affiliates in Galicia and the Basque region in Catalonia itself have all expressed support for a referendum in Catalonia because they view it as a strictly democratic issue. That issue is quite unpopular in Spain, and it’s an important wedge issue because right now as Podemos tries to negotiate their place into the government with the Socialist Party, they’re trying to get the Socialist Party to be able to lead a government but with the support from Podemos, from the Basque Nationalist Parties, from the Catalan Nationalist Parties, and from other actors who are in favor of the right of self-determination.

So the problem is that–so it has historically been quite against this and [inaud.] and [inaud.] so the socialist even is against the popular party. The Spanish right wing are not–they just don’t want to hear it. So that makes it with such a fragmented parliament as Spain has right. That makes it real default to form a government and a majority coalition because neither the two right wings parties have enough to govern on their own. Nor does the left have enough votes to govern on their own without support from the nationalist parties.

PERIES: And the greater fragmenting issue right now is really of austerity. Whichever party ends up being in power. Whether they’re going to end up being willing to implement austerity measures or not. Those questions you would deem more important at the moment.

DELCLOS: Well I think that austerity is the central issue in Spain and not just austerity but–Spain is undergoing right now what’s kind of a crisis of the regime established in 1978 with the transition away from Franco’s dictatorship. We’re all of the consensus that we’re kind of established to make that transition peaceful, to make it very conflict free or falling apart. And they fell apart largely as a result of the corruption that has been revealed in recent years and because of the economic crisis that is different than austerity. Because economic crisis was based on the construction and housing bubble which was largely fermented by both the socialist and the popular party, and when the bubble burst that had a lot of people lose a lot of jobs.

On top of that there’s austerity. So this creates a situation where you see these corrupt politicians imposing EU austerity without really too much debate or changing the Spanish constitution to basically make paying the deficit a priority over paying for social rights. So I think this is a central issue. But I don’t think that austerity is the biggest issue dividing Spain right now. I think the biggest issue dividing Spain right now is Spain itself. And sort of the consensus that established what is its current political regime which it has not been able to withstand the demands of the indignados movement for instance in 2011 for greater democracy.

And so that has spilled over into lots of different realms. The demand for more democracy is a very radical demand and it can lead to different–people trying to establish their rights and trying to decide over their future. And the fact of the matter is that neither Spain’s current institutional architecture nor the EU’s current institutional architecture allow for people to decide over their future. And I think that’s–the Catalan referenda is not just about nationalism. It’s about this capacity to decide over your own future.

DELCLOSE: Thanks for having me.