In a rare move, hundreds of workers of the Nemak aluminum factory in Windsor, Canada, decided to occupy their factory when it was announced that it would close down soon. Pablo Vivanco reports

In a rare move, hundreds of workers of the Nemak aluminum factory in Windsor, Canada, decided to occupy their factory when it was announced that it would close down soon. Pablo Vivanco reports 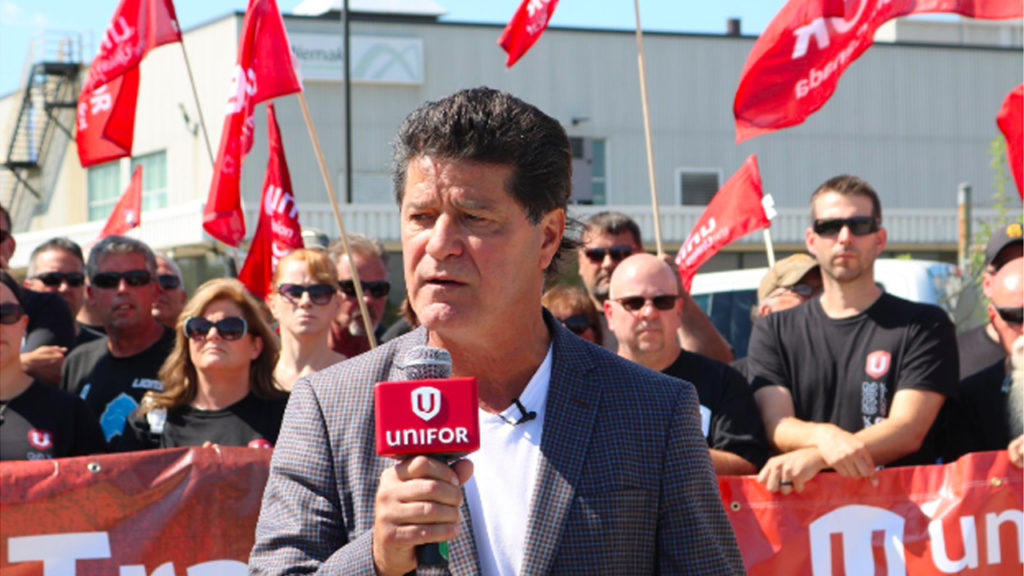 PABLO VIVANCO: The anger was palpable among hundreds of workers and supporters that gathered outside the Nemak Aluminum Plant in Windsor, Canada. In July, employees of the auto parts manufacturer were told that the factory would close two years before their collective agreement expired. Toni Koren, an analyst at the plant, is one of the over 200 workers that stands to lose their job.

TONI KOREN, NEMAK WORKER: Well, we were off for three weeks. We were laid off from Nemak, and then we came back on the Monday, and then on Tuesday, July 15th they told us that the plant was closing.

PABLO VIVANCO: After talks with Nemak’s owners failed, Toni and her coworkers decided to shut down and occupy the plant on Labour Day. Nemak workers are unionized with Unifor, Canada’s largest private sector union with over 300,000 members. For union official Mike Kemp, the company is not only breaking their agreement with their workers, but also with Canada’s government.

MIKE KEMP, UNIFOR STAFF REP: And it’s not a case of them going bankrupt, or not having enough money, or having programs available to run. They want to take money that they’ve received from the government for new technology and take that technology to Mexico, and pay those workers less wages and less benefits, and leave the people that work here and their families stranded.

PABLO VIVANCO: In 2017, the Mexican-based Nemak received $3 million from the Canadian government. The pro-business government of Justin Trudeau touted the deal as good for the economy and Nemak’s workers.

NAVDEEP BAINS: And today’s announcement, in Nemak, the $3 million goes towards research and development. And of course that’s very important to make sure that we continue to have products that are competitive, that are part of global supply chains, that add value, but more importantly, this investment also creates 70 new jobs over the next five years. So this—

PABLO VIVANCO: While funds were directly linked to maintaining jobs as well as the collective agreement signed by the union, workers were critical of the lack of conditions which allowed the company to break its commitment despite taking the money. Unifor’s President, Jerry Dias, who has been criticized by some for his close relationship to the Trudeau Liberals, blamed Nemak.

PABLO VIVANCO: Since the signing of the North American Free Trade Agreement, companies searching lower wages have taken manufacturing jobs out of Canada. This has been particularly acute in the auto sector, where Canada has lost some 466,000 jobs from 2000 to 2009. For cities like Windsor, whose economy is largely driven on auto manufacturing like in neighboring Detroit, the job losses are felt by many.

TONI KOREN: I’m a single parent, you know what I mean? I have a mortgage. How do you expect me to keep going on? And then the jobs that are out there, there’s not much left that are decent paying. They’re almost like minimum wage jobs. And when everything else has gone up, how are we expecting to live?

PABLO VIVANCO: The Nemak occupation continued as Canada’s federal election campaign officially started. But with no indication of government intervention at this stage, Nemak workers vowed to stay and hoped the action would inspire other workers facing job losses.

MIKE KEMP: I think Unifor is going to really take on that fight and stay here as long as necessary until we can take care of all the families and the people that work here.

TONI KOREN: I think we are trying, we’re definitely trying to set a precedent for everyone out there. You know what I mean? The healthcare system, everybody to say, we got to stand and put our foot down and do something, right? We can’t let this keep happening. How many, how many more jobs do you want to have cut? And how many more people do you want on the streets, right? So we’re trying definitely to set a precedent and show we’ve had enough. Enough is enough, right.

PABLO VIVANCO: An occupation of a factory like this is uncommon in Canada precisely because they are considered illegal by the courts. The Provinces’ Labour Relations Board ordered an end to the blockade and a resumption of production at the Nemak plant. And Dias and other Unifor leaders were found in contempt of court. If the union fails to comply, Unifor will face a $75,000 fine directly, while Local 200 will face a $10,000 fine for each day the occupation continues. Dias and three other leaders could be hit with $1,000 per day fines, and even jail time. Nemak did not respond to requests for interviews from The Real News Network.