Outrage Over Province’s Proposal to Arm Toronto Cops With Tasers

Toronto residents cite long running concerns of police brutality among the Toronto police force and the health risks of tasers use, in opposing wider deployment of the weapon

Toronto residents cite long running concerns of police brutality among the Toronto police force and the health risks of tasers use, in opposing wider deployment of the weapon 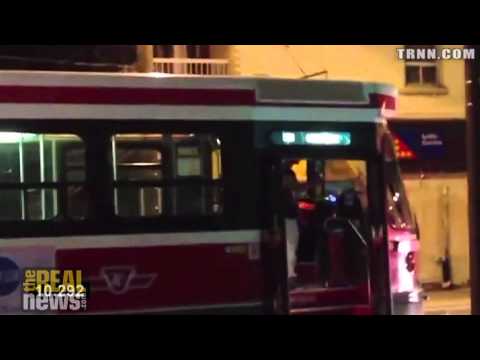 Here in the city of Toronto, the issue of police brutality is not a new one, though it certainly has been launched into the foreground of news and heated public discussions over the last few months. Sparked by the shooting death of 18-year-old Sammy Yatim at the hands of a Toronto officer last July, the issue of police conduct remains in the spotlight as the province of Ontario prepares to expand the use of Tasers for police as an alternative to guns.

MADELEINE MEILLEUR, ONTARIO MINISTER OF COMMUNITY SAFETY AND CORRECTIONAL SERVICES: Equipping frontline officers with CEWs could increase community safety and save lives. Today I am announcing that the ministry will be giving police services the ability to make their own deployment decisions when it comes to CEW use.

TAJVIDI: On September 24, the mental health subcommittee of the police board held a public hearing to discuss the wider deployment of Tasers, which have until this point been restricted in Ontario to use by supervising officers. The board has not yet made a decision. And at Tuesday’s deputations, opponents rallied in front of City Hall, then joined many inside the council chambers to challenge the proposal.

NIGEL BARRIFFE, URBAN ALLIANCE ON RACE RELATIONS: Public consultations this week is an opportunity for Toronto police services to listen to the legitimate complaints and fears of people, especially those of us who are marginalized and more vulnerable due to race, poverty, and disability.

UNIDENTIFIED: We have to disarm. How about we start thinking about outside the box? If you want to be a police officer, you’ve got to have ten letters from elders in your neighborhood and your pastor testifying that you are a person who’s really interested in human relations.

TAJVIDI: Speaking to a full room, concerned Torontonians delivered five-minute deputations, sharing personal stories and raising concerns about police abuse, in particular against people in emotional distress or those struggling with mental health issues. According to a report by the Toronto Police itself, officers received more than 19,000 calls regarding people in emotional distress in 2011 alone. Those calls led to 8,600 people being taken into custody. Speakers at the hearing expressed concern about police reluctance or failure to resort to de-escalation tactics, relying instead on arms in tense situations.

BARRIFFE: It is our view that the proposal to arm police with Tasers runs counter to what is required for safer communities and better police relations with the public that they serve. This move escalates the possibility of inappropriate use of force, employing technology that past experience has shown can be used as inappropriately as any other weapon.

TAJVIDI: While police in the province welcomed expanded use of the weapon and maintain that it is meant to provide a nonlethal force option and that not all officers would be armed with Tasers, opposition to the proposal is fueled by earlier and recent incidents of abuse, such as the police Tasing of an 80-year-old woman in Mississauga just two weeks ago, who fell as a result of the electric shocks and fractured a hip. And while not so recently in the news, the name of Polish immigrant Robert Dziekański, who was Tasered to his death by the RCMP in Vancouver Airport in 2007, has become a staple topic of the debate,–

TAJVIDI: –and, of course, the outrage over the death of Sammy Yatim, involving the officer James Forcillo, captured in the famous video that has since gone viral. The teenager was on a streetcar in Toronto’s west end when he wielded a 3-inch knife. Twenty-three armed officers fled to the scene. And although all passengers had been evacuated from the car safely, Sammy was shot nine times, eight shots of which hit him directly. Forcillo, who did not have the authority to use a Taser, then called on a senior officer, who Tasered Sammy after he was already lying on the ground.

What followed were several palpable weeks in Toronto where a vigil, rallies, and press conferences were held in response to the teen’s death and the system that allowed for the incident to occur. Toronto lawyer Peter Rosenthal, who represents families affected by police violence, was also among those who spoke out in the wake of Sammy’s shooting. At Tuesday’s Taser hearing, he sat down with The Real News to elaborate on the view that further arming the police is not a path to saving lives.

PETER ROSENTHAL, TORONTO LAWYER: A Taser: two darts shoot out at the victim. If one of those darts lands in the eye, that could be a serious problem, obviously. Even if they don’t land in the eye, if they land in other parts of the body, which they must do in order to be effective, they’re like fishhooks, and if they get deeply embedded in the body, it’s a nontrivial wound.

What the police really need to do in dealing with people is talk to them more. The more weapons, the less police officers think of other things, like de-escalation. We’ve seen in videos, like in the Yatim case and so on, they don’t do it. You have half a dozen officers pointing a firearm at somebody, yelling, drop it, drop it, drop it or I’ll shoot. Nobody says, excuse me, can we talk to you?

TAJVIDI: A group by the name of Disarm Toronto Police, who also spoke at Tuesday’s Taser hearing, has been vocal about the deeper issues of political and police culture which allow aggressive police conduct to perpetuate and end in tragedy.

SYED HUSSAN, DISARM TORONTO POLICE: The police itself needs to be de-escalated. Its macho, vindictive, us-against-the-world, guardians-of-justice [incompr.] mythology needs to be brought down many, many notches. The issue [incompr.] by giving them tactical weapons. It’s not a tactical problem. We need less officers on the street. We need people to treat each other as human beings. And that’s not going to happen. This isn’t a tactical problem. And no one really, really believes that arming [incompr.] in a time of austerity is moving of money, public money into a security apparatus.

TAJVIDI: Activist Sakura Saunders, who also organizes with Disarm Toronto Police, referred back in her deputation to the 2010 G20 summit held in Toronto, during which the government spent more than $1 billion on security and the city became the scene of mass arrests, violence, and what many called criminalizing dissent.

SAKURA SAUNDERS, DISARM TORONTO POLICE: I spoke about my own personal experience with police abuse. But I also reference the G20, which is actually something that a lot of people in Toronto can relate to. Over 1,000 people were arrested during the G20, many of which were just people, not protesters, that were in the wrong place at the wrong time. And a lot of these people were completely brutalized by the police.

And I asked them: who here thinks the G20 would have gone down better if police had Tasers? And I looked around, and not anyone had their hand up. And there was a number of police officers there, too. You know, not even the police think that the G20 would have been any better. If you compare getting Tased to maybe getting shot, it seems like a Taser is probably less likely to kill you. But in any non-shooting situation, a Taser seems pretty much like the worst.

TAJVIDI: The Toronto Police Services Board will be voting on the further deployment of the weapons at a later time this year. And while law enforcement agents applaud Ontario’s position and continue to market Tasers as a lesser evil, the critiques about deeper issues of police behavior are resounding.