Are Canadians mostly progressive or conservative?

As Canadians prepare to go to the polls on October 14, the question of a majority conservative government continues to play in the minds of voters. Prime Minister Stephen Harper stated last week that Canadians have grown more accepting of conservative ideas. Journalist and Author Murray Dobbin does not agree.

As Canadians prepare to go to the polls on October 14, the question of a majority conservative government continues to play in the minds of voters. Prime Minister Stephen Harper stated last week that Canadians have grown more accepting of conservative ideas. Journalist and Author Murray Dobbin does not agree. 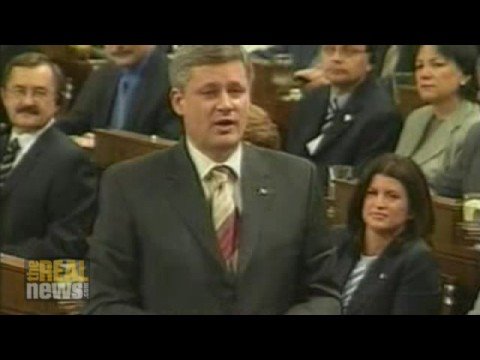 ZAA NKWETA, TRNN: As Canadians prepare to go to the polls on October 14, the question of a majority Conservative government continues to play in the minds of voters. Prime Minister Stephen Harper stated last week that Canadians have grown more accepting of conservative ideas. But have they? Journalist and author Murray Dobbin does not agree.

MURRAY DOBBIN, JOURNALIST AND AUTHOR: Canadians’ values have not changed substantially; in fact, they’ve actually become more progressive in the last 15 years. But what has changed is Canadians’ expectations. And the success of the right has been to lower people’s expectations about the role of government. So, effectively, the right didn’t have to change people’s values, something that’s extremely difficult to do in the short term. All they needed to do was to convince Canadians that their values would never find their way into public policy. In other words, they were basically successful at convincing Canadians that their values were impractical and that their notion of what the role of government should be was also impractical. So you now have, you know, a Canadian population that consistently in polls shows itself to be social-democratic. Two-thirds of Canadians, if you look at the results of polling on a whole range of questions about the role of government, and, you know, the importance of Medicare, the importance of getting rid of child poverty, all the things that social democracy represents—. But they have been convinced over, you know, basically a 15-year campaign, the first campaign—and the people who remember the fight against the Free Trade Agreement in ’87, ’88 will remember this. There was this consistent line that was taken by virtually everyone in favor of free trade, and that was the phrase "there is no alternative." Brian Mulroney, I mean, every time he spoke, he used it. Every editorial writer in the country, with the exception of The Toronto Star and The Edmonton Journal, used it, every economist, every right-wing think tank, every business spokesperson. So there was this enormous propaganda effort that the left failed to counter was this whole notion that there is no alternative, which, of course, on the face of it is preposterous: there’s always alternatives; it all depends on what price people want to pay for the alternatives. There’s a core of Canadians who are conservative. Stephen Harper can count on about 30 percent hardcore support for very conservative values, and then he has to get another 10 percent in order to, you know, eke out a majority. It testifies to what I’m saying is that the majority of Canadians do not support Stephen Harper. There’s another poll out today saying the majority of Canadians are extremely anxious about the notion of a Harper majority because they have a pretty good idea of what that might mean. [If] the other parties don’t tie Harper to George Bush and the Republicans and do that clearly in their advertising and in their campaigning, then people will tend to forget that. What it says about progressive organizations, whether it’s unions or social movement organizations, civil society groups, NGOs, all those extra-Parliamentary organizations that are responsible for creating the political culture in this country beyond political parties, it simply testifies to the fact that they have failed to respond to an extremely effective effort at framing the issues on the part of the right. The right has taken the whole science of issue-framing very seriously and have done it for 15 years. The left, unfortunately, has maintained its sort of self-righteous position that all they should have to do is tell people the facts, and they should behave accordingly. Well, it doesn’t work that way. Issue-framing is extremely important, and the left is just now beginning to look at some of this stuff. It’s partly a failure of the left to respond to an extremely effective right-wing campaign that began during the free trade fight. We almost won the free trade fight, and partly because we framed the issues more effectively than they did. And if it hadn’t been for the first-past-the-post system, we would have defeated free trade. But the right has learned—and the Republicans are the key purveyors of this sort of right-wing framing, and the right in Canada has learned from them. And Stephen Harper, for example, within days of becoming prime minister, met with Frank Lundtz, who is the Republican issue-framer guru. And within a week of that, Stephen Harper was using the term "tax relief," which is a classic framing of taxes as a burden and almost as an illness that has to be relieved. The real problem, in a sense, is our first-past-the-post electoral system, in that if we have proportional representation, the most seats that the conservatives would get would be 120, you know, 40 percent of 308 seats. So if we had proportional representation, the Conservatives would not be able to govern, because you would then have the potential for clear coalition government, which under this particular system is extremely difficult to create. But under a proportional representation system, you wouldn’t have a government that has a minority governing as if it was a majority.

Murray Dobbin, now living in Powell River, BC, is one of Canada’s most popular progressive political commentators and analysts and has been a journalist, broadcaster, author and social activist for over forty years. He is a past board member with the Canadian Centre for Policy Alternatives, and former executive board member of the Council of…