The Canadian election and the Afghan War 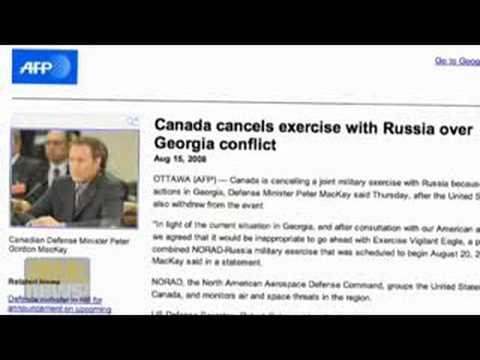 HARPER: Between now and October 14, Canadians will choose a government to look out for their interests at a time of global economic trouble. They will choose between clear direction or uncertainty, between common sense or risky experiments, between steadiness or recklessness.

NKWETA: Harper’s political rivals are Stéphanne Dion of the Liberal Party, Jack Layton of the New Democratic Party, Gilles Duceppe of the Bloc Québécois, and Elizabeth Ming of the Green party. Since becoming prime minister, Harper has extended Canada’s military mission in Afghanistan until 2011. In so doing, critics say he has also transformed Canada’s foreign policy.

MURRAY DOBBIN, JOURNALIST AND AUTHOR: Canada’s foreign policy is being deliberately transformed by not only our participation in the occupation of Afghanistan but by all of the things that come out of that. I mean, first of all, we took on a combat role in Afghanistan largely because we were afraid the United States was angry at our failure to support them in the invasion of Iraq. But just as importantly, coming out of that we see enormous expenditures on defense. We are now spending at levels higher than at any time during the Cold War period. Under the former head of the military, Hillier, we saw a man who was constantly promoting the military. Really, we began to see the military being integrated into what has been a strictly non-military culture in this country. That, along with the huge increases in military spending, really make us increasingly a carbon copy of the United States. Canada’s involvement in Afghanistan, we can see where it’s headed, because there’s been an announcement that they’re going to build a pipeline through southern Afghanistan which would go up through Kandahar. So, in effect, Canada’s role will be to defend the building of an American pipeline. But more than that, Canada is supporting the United States in NATO in terms of the United States’ efforts to encircle Russia with very strongly free-enterprise, pro-American regimes, such as the one of Saakashvili in Georgia. So Canada, along with the United States and to some extent Britain, has been pushing very hard for NATO membership for both the Ukraine and for Georgia. So indirectly it’s supporting United States efforts to reduce the power of Russia in terms of its control over oil and gas in the Caspian region. And so Canada, with absolutely no national interest in doing so, is supporting an American foreign policy which could in the long term actually harm Canada’s interests.

NKWETA: Under the previous Liberal government, Canada’s role in Afghanistan began as a humanitarian relief effort. It was later converted into a combat mission.

DOBBIN: The Liberals are in a tough spot. I mean, they were the ones who agreed to go into Afghanistan. It was Paul Martin who agreed to take on a combat role in Kandahar. So the Liberals are not in much of a position to say anything, because they are complicit in this whole thing. The more unfortunate part of this is that the NDP has decided to essentially drop the issue of Afghanistan. And I think the reason for that is that the Harper government has successfully framed the issue around the call for supporting our troops. Canadians are conflicted on this, although an increasing majority—a recent poll suggests an increasing majority actually oppose the conflict in Afghanistan, and over 60 percent, something like two-thirds, believed that we cannot win. People are conflicted because they don’t want to appear to be not supporting our troops, who are being killed on a regular basis and being wounded in this conflict. So I think it’s a complicated issue for political parties in a 37-day election to deal with an issue which is extremely complex. For that reason I think that the parties who opposed the war, both the Bloc and the NDP, have looked at it and decided that in terms of a short election campaign, it’s not an issue that would pay off for them. The Harper government is committed to what is called "deep integration." The formal name for this is the Security and Prosperity Partnership. It’s a plan to gradually, over a 20-year period, integrate Canadian policies with American policies. That includes the military policy, foreign policy, energy policy. We have governments both Liberal and Conservative committed to this whole deep integration agenda, which of course at its root is an assault on Canadian sovereignty. It is virtually impossible to win in Afghanistan. The retiring general in charge in Afghanistan for the United States recently did an interview and stated that in order to pacify Afghanistan, you would have to have 400,000 troops. They currently have less than 60,000 who are actually involved in combat. Even if they took every soldier they now have in Iraq and move them to Afghanistan, they would still be 200,000 troops short. And so the loss of Afghanistan is a certainty. The only question remaining is when western powers recognize that and leave the country, and how much destruction will be done, and how many Afghans and Canadian soldiers will have to die before that happens.

Murray Dobbin, now living in Powell River, BC, is one of Canada’s most popular progressive political commentators and analysts and has been a journalist, broadcaster, author and social activist for over forty years. He is a past board member with the Canadian Centre for Policy Alternatives, and former executive board member of the Council of…