Ahmadinejad plays to his base

Ahmadinejad plays to his base Babak Yektafar : To understand Ahmadinejad’s speech at the UN conference against racism, you need to understand Iranian domestic politics

Ahmadinejad plays to his base Babak Yektafar : To understand Ahmadinejad’s speech at the UN conference against racism, you need to understand Iranian domestic politics 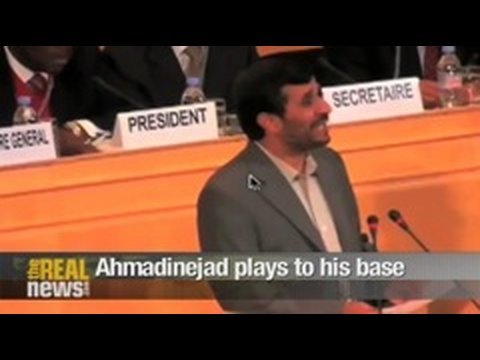 PAUL JAY, SENIOR EDITOR, TRNN: On Monday, April 20, President Ahmadinejad set off a bit of an explosion at the United Nations Conference against Racism. Here’s a little bit of what he had to say—and you’ll see the reaction.

MAHMOUD AHMADINEJAD, IRANIAN PRESIDENT (VOICEOVER TRANSLATION): Following the World War II, they resorted to military aggressions to make an entire nation homeless on the pretext of Jewish sufferings. And they send migrants from Europe, the United States, and from other parts of the world in order to establish a totally racist government in the occupied Palestine, and, in fact, in compensation for the dire consequences of racism in Europe.

JAY: So that was President Ahmadinejad. And, as you could see, the conference broke up. The EU members walked out, some others as well. So just what was it that President Ahmadinejad wanted to achieve? Well, to help us understand this, we are now joined by Babak Yektafar. He is the editor-in-chief of Washington Prism Magazine, and he specializes in covering Iran and the United States. Thanks for joining us, Babak. So just what did Ahmadinejad want to achieve there? What he said, "Zionism is racism," he’s said it before, many other people have said before; many academics, even, have said it. The United Nations had a vote which said that Zionism is racism. The substance of what he said there was nothing new, but the context, his timing—. If he thought he was going to isolate Israel, certainly he accomplished more isolating Iran, no?

BABAK YEKTAFAR, WASHINGTON PRISM: First of all, we’ve discussed this before. A great deal of what is being said and what is being done outside of Iran in regards to Iran’s foreign policy or even the kind of stuff that Mr. Ahmadinejad tends to say have much greater domestic implication than they do international. This is not to say that Mr. Ahmadinejad does not enjoy his reputation on, let’s say, the Muslim street and the Arab street and things of that nature, but the fact of the matter is, particularly with the upcoming elections on June 12, the Iranian presidential elections, and the fact that Mr. Ahmadinejad, you know, considering the four years of his presidency, has not done much to show for any kind of improvement on the economy of Iran or any kind of standing of Iran. To him, this is a way of saying that the most important thing that he’s done is to bring Iran to its rightful place, where he can go on an international stage and present the case that Iran believes in, or at least he believes in, that Iranians should and stand up against the world powers and the current world order. This is the kind of stuff that we’ve also heard from the supreme leader, saying that the current world order, with, you know, one, the United States, being the big chief, if you will, is not something that we should be standing for. So, to him, that’s his main achievement, bringing Iran to its rightful place in the international arena.

JAY: The timing of Ahmadinejad’s speech was also rather interesting. He insisted on opening the conference, so the whole thing was very well planned. And it comes at a time, in fact, when Israel was actually under a lot of criticism for its—what many call disproportionate response in Gaza. Some people have called it war crimes. There are some investigations going on about the use of phosphorus as a weapon and other things that are being called war crimes. It’s a very particular moment where Israel’s quite isolated, though after this speech at the conference and all the EU countries marching out, to some extent it actually reverses this, doesn’t it?

YEKTAFAR: The point to look into, particularly the walkout by the European members, was something that Mr. Ahmadinejad has said in the past before, in that even if we do believe in Holocaust, according to what he says, he has doubted it, and he says that there needs to be more research. But he’s saying that even if there is such a thing, it was committed by the Europeans. So this is the conference on racism. Let me bring this to you, that you are the guy, you’re the ones who were racist, ’cause you wanted the Jewish population of your country, so you grab this land from Palestinians and you give it to this group of people, where they can create this country called Israel. Now, that’s from his perspective, and this is what he—and at that point the Europeans started walking out. But I think it’s—we can’t necessarily mix the two of them together. On one hand, you have this pragmatic approach that—at least from the European perspective, that there needs to be some sort of an engagement with Iran, particularly at this given moment; but on the other hand, I don’t think Europeans or any other serious politician want to be seen or labeled as anti-Israel when you have someone with Ahmadinejad’s character going up there, even though I think a lot of them expect it. And another important thing is that he—with Ahmadinejad you get what you see. Sometimes I think it’s hard for people to understand that he truly, truly believes that he’s standing for justice. And that has been an issue of his, even before he became a president, talking about Palestinians and the plight that they’re in. And his whole thing is that, you know, there should be elections as to whether or not the whole population wants a state called Israel.

JAY: The timing of his speech is interesting in another respect. Last time there were some serious negotiations going on with the US, with Europe, about the Iranian nuclear energy program, Ahmadinejad organizes a conference on whether or not there was a Holocaust and invites Holocaust deniers from all over the world, and many analysts at the time said that perhaps he had timed it this way precisely to scuttle the negotiations. And now we’re at another time where there’s some possibility, at least, of serious discussions between the US and Iran, and we have a very staged event where he comes and blows this conference apart. It seems once again, perhaps, to undermine the possibility of real negotiations, pulling off something, you know, I’d call a stunt.

YEKTAFAR: That there are as many people in Iran as there are in the United States, or some other countries, who do oppose any kind of rapprochement between, particularly, Iran and the United States, or any kind of opening [inaudible], because there’s a lot of money involved, particularly in Iran, with certain groups in Iran who do not want to see that to happen. Yes, so there are a number of people who will find ways of opposing that. But I think the one serious, meaningful thing that we can think of in this particular regard is something that I pointed to before, in that Ahmadinejad sees his presidency—and, again, the upcoming election is important element in this—he sees that as the most important thing that he has done. Something that his predecessor, Khatami, and his reform movement was not able to do was to bring Iran back to the stage, in his mind, elevating Iran to the status where they can stand up to what they call the oppressors of the world, be it the United States or be it Israel or other countries, and they want to be able to negotiate from the position of what they regard as strength, as opposed to being told, "You do this and that." But there were segments inside Iran, particularly from what would be regarded as a reform media, that criticize his trip, essentially saying that there were only two or three presidents in this whole conference. Why did we have to send our president there to do this? And his advisers should have known that by this kind of speech, you would have this spectacle of people protesting, throwing tomatoes at him at one point, and also a walkout. But, on the other hand, if you also listen to Iranians, they are saying that talk is nice and there’s been a lot of that, but action has not been following the talk, because just a week before President Obama sent that New Year message to the Iranians, he renewed the Iran Sanctions Act. And to Iranians, you know, the action itself does not necessarily match the talk itself. So they want to see more action on all fronts, as opposed to saying, "Well, we will soften up, but they still have to do this and that." Again, a lot of time, when you hear Iranians right now, the one common thread that you see in their argument is that we need to be treated with respect on equal terms, and that’s the only way that we can engage in a dialogue. So, you know, even though it seems that way, I think that you still have these political maneuvering and games that are being played for one-upsmanship to be at the stage where, supposedly, they will be on equal terms when the time comes for negotiations.

5 Alarm Fascism: Trump’s Burning it All Down