Brazil’s Legal Order as the Source of Political Disorder 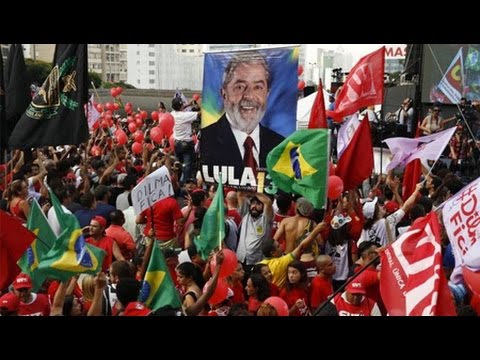 GREGORY WILPERT, TRNN: Welcome to the Real News Network. I’m Gregory Wilpert coming to you from Quito, Ecuador. With us today for part two on Brazil is Boaventura de Sousa Santos, joining us from Lisbon, Portugal. Before we get into the international context of Brazil’s current situation, Boaventura, tell us a little bit about what you believe have been the mistakes of the da Silva and Rousseff governments, the mistakes that brought them to this precarious situation with Dilma Rousseff facing impeachment now.

Both Da Silva and Rousseff have been accused from the left of not having pushed reforms far enough. What do you think? Would that have helped prevent the current situation?

First of all, I mean, if we go a little bit back in the first part of the PT governments after 2004, there was a moment in which, with such popularity in the country, lots of changes should have been made, particularly two. One would be the political reform, because the political reform in Brazil is badly needed because of these coalitions that are built, you know, that are against any logic because you get coalitions of right and the left on a kind of an opportunistic base and with no stability, and no ideological coherence, and also the fact that money is too much present in the elections. we know that this is not a specific feature of Brazil, but in Brazil it plays a very damaging role because of the monopoly of the media by Globe and by other media that are hostile to the leftist government, and therefore we should have had a kind of a political reform at the time in which that was possible. In fact, there was talk about a new constitution.

Second of all, I think they should have a kind of a regulation of the media. Not to exert censorship, but to allow for diversity. That is to say, to finance also the alternative media that they could have done so, because many of the people in the social movements they run radios and TVs and [inaud.] and so on, and the government could have helped in having a broader and more diverse type of public opinion [than] we have now.

But if we come closer to the point now, you know, the short [inaud.] type of changes, the fact is that, as you know, the PT governed the old way, basically the old way without any of these reforms, based on the idea that the China development was such a pushing effect that allowed for the rich to become richer and to get some money for social redistribution called the family grant, which was remarkable as a kind of unprecedented type of social redistribution in the country that allowed 45 million people to get out of poverty.

So this was remarkable in itself, but it lasted as long as there were conditions for this, and now, since China started de-accelerating and since, you know, the crisis in financial markets became almost endemic and permanent, as they are now, then there was [no other] way of carrying out these policies, either through a fiscal policy that would allow for the rich to pay more in taxes which is, of course, quite understandable, you know, as anathema for neoliberalism, and of course some counter-cyclical type of policies that would put public investment and allow for capitalizing some of the industries that were in crisis. Instead of that, Dilma Rousseff decided to conduct a kind of IMF austerity measure policies, as we had in Europe, in Portugal and Spain and Greece, called the Troika. That is to say, these policies that focused on deficit, focused on social expenses, and usually social expenses, that is to say, the expenses that effect more of the popular classes.

Well, under such circumstances, putting in power [inaud.], can you imagine that the government that is elected by the peasants, by the people of the movement of the landless, all of the sudden the minister of Agriculture is the woman that represents the agribusiness in the country, Kátia Abreu? This is preposterous, quite frankly. I have to say that I felt offended when I saw that.

So there will be contradictions. Dilma, for instance, took two years to give an audience to social movements in the trade unions even though she was talking with the business people and the business community. So she tried to be different from Lula, and since Lula was totally open to social movements she decided to run a very different style: very aloof, very distant and sometimes even hostile. I remember very well at the World Social Forum that Rousseff said [inaud.] austerity that we were radicals and that Brazil had such a responsibility as a great economy, and therefore they should pursue along these new lines.

Well, as you know, the measures were a disaster. There have been losses in the GDP. The crisis is there, recession is coming, unemployment of course, and under-financing of the family grant, universities, many of them in crisis because of the fact that they expanded the university system but they didn’t fund it adequately, and therefore there were strikes of students and teachers and so on. So the situation is not a nice situation.

Of course, this is no reason for impeachment. They are very good reasons to lose the next elections. That’s what it should be, in my view. And in my view they barely won the election of 2014, and definitely if they will go on in this direction they will lose in the 2018 election.

WILPERT: LEt’s turn to the international context in all of this. In your article you also mentioned that the US is also involved in Brazil’s crisis. What has the US been doing to interfere in Brazil?

SANTOS: Well, the US is back in the continent. You know that in the ’90s and early [2000s] the US was very much focused on the Middle East and therefore in a sense, in my view, some of these progressive elements were made possible because the United States was a little bit destructive. They were not focusing on the continent. With the first coup occurring in Honduras, we can say that is the first signal that the US imperialism is coming back, and is coming back in force, starting with small countries and then with the usual destabilization policies that took place in Venezuela, to a certain extent in Argentina and now in Brazil.

What does that mean? It has nothing to do with the policies of the past, I mean the situation that led to the military coup. It’s not just to mobilize the, you know, the military, because military coups are out of fashion. Now the destabilization is something that was tried out in the Arab Spring, in the Balkans, you know, [inaud.], probably you know the types of ideas that are behind that ideology, which is basically the idea that we should [inaud.] democracies, but democracies that are friendly to the interests of the United States.

In order to do so you have to fund any democratic organizations, and local organizations, and the local development organizations, on the condition that they may become hostile to these governments that are considered, you know, hostile to US interests. Of course, they have done that. They have identified some, the Koch brothers, you know very well of their presence in the United States. They are very much present in our leaders, young leaders of the movement against Dilma that have been attending the academy that is funded by them and training leaders of the world, because the Koch brothers have really strong, strong interests in the oil industry, and here you have the Petrobras that is still a nationalized plant which was about to be privatized, but Fernando Henrique Cardoso and Lula da Silva stopped the privatization process, and of course they’re [inaud.] about the oil reserves that are not in the market, and therefore they want these very resources in the market, and of course open the concessions and in no way to maintain what is in the constitution, that part of the proceedings from the exploration of the oil will be for health and for education, for the policies that the government have prioritized.

So there are very strong interests, even though, in my view, this is not just the whole picture. The whole picture, in fact, is to bring also the idea of the [brakes] in the Trans-Pacific Partnership, but together with the Transatlantic Partnership–the two huge, multinational, free trade agreements that are being, at this moment, negotiated in some secret, but we know very well what is there. And what is there basically is neoliberalism globally, you know, absolutely consolidated with no possibilities of these nationalized industries or these resources not open to the market. Privatization, liberalization, and of course no possibility for the [brakes] to interfere with the hegemony of the financial markets that are still run, the multinationals that are in fact still running the interests of the United States.

So there are big stakes here involved, and I think Dilma, at this point, is, you know, someone that has to be sacrificed. I don’t know if they are going to succeed, but in any case the situation is going to be very unstable until they reach their goal, unless of course the people, democratically, speaking in a new election [inaud.] a new election is coming, then they decided that they should go ahead with these type of policies that were from Lula’s government onwards, and not the policies that were typical of the previous period led by Fernando Henrique Cardoso.

This is anon uncertain. Nobody knows what’s going to happen. What we should struggle for is that democratic [can] cleanly and without foreign interference, they should proceed. And if the government can make lots of mistakes it should pay for it in a clean election. That’s the only way that I know, anyway.

WILPERT: We will definitely keep an eye on Brazil. The good news for Rousseff and Da Silva is that the other day the Supreme Court barred Sérgio Moro from investigating Lula, saying that he had overstepped his mandate with the release of a phone conversation between Lula Dilma. Let’s see what happens now. We’ve run out of time, though, but thanks so much, Boaventura, for talking to us about all of this.

BOAVENTURA: Thank you for having me.

The US Should Stop Lying About Its History