Los Indignados to Podemos, The Making of a Party (2/2)

One of the major polls shows Pablo Iglesias of Podemos could become the next Prime Minister of Spain, says Becquer Seguin

One of the major polls shows Pablo Iglesias of Podemos could become the next Prime Minister of Spain, says Becquer Seguin 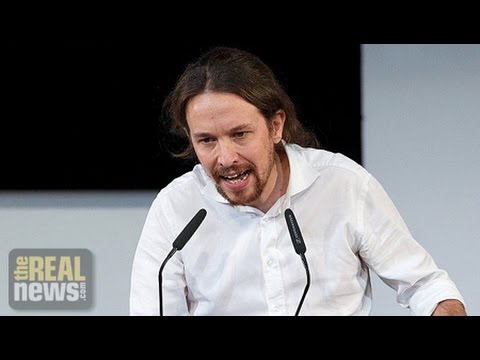 We’re in conversation with Bécquer Seguín. He is a Mellon Sawyer Seminar Fellow and doctoral candidate in romance studies at Cornell University. And we have been talking about Podemos, how it came to be and the support it has in Spain, at 1.25 million leading up to the European Parliament elections last May.

Now we’re going to talk about how this translates in Spain in terms of local elections coming up. And so my first question to you, Bécquer, is, how do you think Podemos is going to do in the upcoming elections? Because they are currently leading in the polls, aren’t they?

BÉCQUER SEGUÍN, PHD CANDIDATE, CORNELL UNIVERSITY: Yeah. So there are a series of different polls, but, yes, one of them, one of the major polls, has been leading and has Pablo Iglesias becoming the next prime minister of Spain.

So there’s a series of local and regional elections, municipal elections, that are coming up on May 24. But, actually, in some of the provinces these elections have been put forward. So the earliest election, the first test for Podemos, will be in Andalusia when those elections are on March 22. And there, one of the Podemos MEPs, Teresa Rodriguez, is running against /suˌzanariˈɛt/, who was the socialist candidate.

And what’s interesting about what’s been going on is that the socialists in Andalusia have actually been talking to the right-wing party, to Partido Popular, about a coalition, about having a coalition government, in order to prevent Podemos from ruling the autonomous region of Andalusia.

PERIES: So this is now leading to what some call the leftward wave in Latin America. A similar thing could be taking place in Europe. And there is popular support gaining throughout Spain for Podemos.

Now, in terms of the political makeup in Spain itself, how are the ruling parties doing? And who are the real contesters for Podemos?

SEGUÍN: So, in Spain the ruling parties in the elections this past May, the ruling parties took less than 50 percent of the vote, which, since 1970, since Spain’s transition to democracy, had never happened. So it’s unprecedented, what Podemos has actually been able to do so far to the Spanish system, which is kind of break it wide open. And this is putting into question the ability of the PSOE, the Socialist Party, to actually exist as a living force going forward.

The Socialist Party was founded in the 19th century–ironically, by another, Pablo Iglesias. And then the Socialist Party was affiliated with people like Marx and Engels, etc. But now the Socialist Party is basically your typical neoliberal, centrist, maybe a little bit left-of-center party. But many predict, as me and my coauthor wrote in an article for The Nation, many have predicted that if the Socialists have to align with the right-wing party, with the PP, that that will lead to the end and the dissolution of the Socialist Party. So what Podemos–the implications for Podemos are very important in the upcoming elections.

PERIES: And let’s talk a little bit about the Podemos platform. And how does it distinguish itself from other left parties?

SEGUÍN: So Podemos’s platform is continuously ongoing and evolving. Podemos had what they called a constituent process. And that led to the following proposals that kind of divide into economic and social proposals. The economic proposals were kind of a restructuring of the national debt similar to what’s happening with SYRIZA right now and Yanis Varoufakis’s discussions in the E.U. They also want to deprivatize national services like health care and energy. They also want to have what some would call a universal basic income, but what others might call an income for those in need. So this frees up the ability to give more money to people who have needs instead of providing a kind of flat, universal base. And then they also provide–they also propose a 35-hour working day. Now, those are the economic principles.

Now, the social principles that they stand on are anticorruption. In Spain over the last five to ten oyears, there have been many corruption scandals, especially with–.

PERIES: Leading right up to the house of the monarchy.

SEGUÍN: Exactly right, the house of the monarchy, in the famous situation where the king went down to Africa to go hunt elephants in his private time, those kinds of corruptions scandals. But also corruption scandals within the political parties themselves are very important in Spain, and people are very fed up with these kinds of revelations. So Podemos has a very strong anticorruption bent.

They also propose to leave NATO. They propose to stop the evictions. As I mentioned earlier, there are hundreds of thousands of families and more than a million people in Spain have been evicted since the housing crisis that started in 2007. And they also–their kind of final proposal is to allow the autonomous regions of Spain to dictate whether they want to remain a part of Spain or not, right? So, in other words, to leave the question of independence up to those autonomous communities.

PERIES: So, like Catalonia, that’s actually talking about separating.

So Pablo Iglesias’s proposal would be to let the Catalans decide, right, let these people make their own decisions, and those decisions would then be respected by the central government in Madrid.

PERIES: Right. Bécquer, I want to thank you so much for joining us and enlightening us on what’s going on in Spain. And we’ll certainly be riding this story. So I hope you join us again.

SEGUÍN: Of course. I’d be glad to. Thank you.

Becquer Seguin is an Andrew W. Mellon and John E. Sawyer Seminar Graduate Fellow and Ph.D. candidate in the Department of Romance Studies at Cornell University. He is currently finishing a dissertation on how political tactics like the general strike shaped literature and art on both sides of the nineteenth-century Hispanic Atlantic. His academic writing…