Los Indignados to Podemos: The Making of a Party (1/2)

The Podemos leader Pablo Iglesias learned much of what he knows from the leftward shift in Latin America, says Becquer Seguin, doctoral candidate in Romance studies at Cornell University

The Podemos leader Pablo Iglesias learned much of what he knows from the leftward shift in Latin America, says Becquer Seguin, doctoral candidate in Romance studies at Cornell University 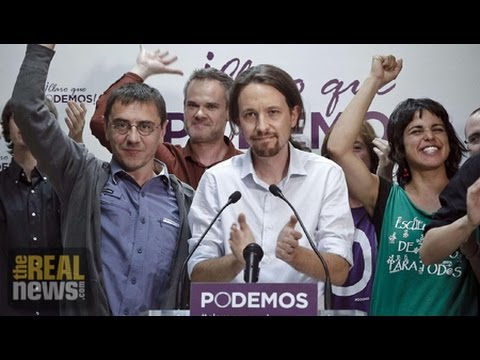 Just over 100,000 marched in Madrid last Saturday in the biggest show of support for the anti-austerity party Podemos, whose surging popularity is being compared to the SYRIZA party in Greece. The leader of Podemos, Pablo Iglesias, has been seen in Greece at SYRIZA rallies leading up to the SYRIZA win on January 25. Podemos, which means we can, was formed just over a year ago, but produced a major shock in the country by winning five seats in the elections for the European Parliament in May 2014. It is currently topping opinion polls in the run-up to local, regional, and national elections this year.

To talk about all of this is Bécquer Seguín. He is Mellon Sawyer Seminar Fellow and doctoral candidate in Romance studies at Cornell University.

Thank you so much for joining us, Becker.

BÉCQUER SEGUÍN, PHD CANDIDATE, CORNELL UNIVERSITY: Thank you for having me.

PERIES: So, Bécquer, give us some background here. Who is Podemos? How did it get started?

SEGUÍN: So Podemos started out of a manifesto that was written in January 2014. And the manifesto is called Mover ficha, which means to kind of shift the pieces on the checkerboard, if you will. And it was signed by a group of activists, professors, and of other kind of political types in Madrid. It was signed by about 27 activists. So out of that there was kind of little rumblings of what could possibly be a political party that would challenge in Spain’s upcoming, then upcoming May European elections for the European Parliament. So many academics signed this.

And then Pablo Iglesias, who was kind of chosen by consensus to be the leader of the party, asked for public support. And by the next day, after Podemos introduced its project, over 50,000 people signed up to support the party.

So, basically, in the months leading up to the European election what happened was Iglesias and a number of other people close to the party began appearing on social media, also began appearing on mainstream media in Spain, and they created this kind of–they kind of generated lots of enthusiasm for what could be a change in Spain’s political system, which has been dominated, basically since the transition to democracy since Franco’s death, by two major political parties, by the PP, the Partido Popular, which is called–the kind of the popular party on the right, and then by PSOE, which is the socialist party on the left.

So lots of people thought that this system needed to be changed, right? There is a huge national debt in Spain. It’s 100 percent of GDP. There have been lots–since 2007 there have been lots of evictions. A group called PAH reports that over 570,000 families have been evicted from their homes since 2007. And the child poverty rate, just to give another statistic, is at 36.3 percent, according to UNICEF, which is among the highest if not the highest in Europe. So, because of this kind of desire to break with the current political order, people were looking for alternatives.

PERIES: So, Podemos’s origins really goes back to a movement that was very similar to Occupy in the United States, fighting for similar rights. Give us some foundational description of the organization. You said they’d started with the tenant rights. And what else?

SEGUÍN: Sure. So lots of the people who now participate in Podemos were very active in the indignados protest in the summer of 2011. And many of them were kind of youth organizers or organizers against what I mentioned earlier, the kind of evictions, the major evictions that were going on in Spain. So lots of these activists practiced the political strategies that then Podemos would later adopt. So, for example, these include the circles.

So Podemos has organized a bunch of circles which are the kind of–for a North American audience, would be the party bases. But these are very horizontal, and they happen online, they happen in person, and they’re built around giving people the responsibility over how to choose what their party proposes, what their party decides, and how their party advocates. So lots of these kind of mechanisms that Podemos would later take up actually started with the indignados in Spain in the summer of [crosstalk]

PERIES: Which is really a social movement who was at the time anti-party. So how does Podemos now come out of it forming a party?

SEGUÍN: So that was a huge question, and that was a question that took basically two years for the left to debate and decide, right? The Indignados were in 2011. Then the Indignados movement kind of abated. It was also suppressed. The Partido Popular and Mariano Rahoy’s government imposed many strict kind of policing rules that cut down on protests, cut down on collective assembly.

So what happened was people went to social media. They also went to kind of their next-door neighbors and figured out how they could possibly challenge this kind of prohibition against collective assembly.

PERIES: Now, the Podemos leader, Pablo Iglesias, can you tell us more about him? What is his background? Who is he? And how did he become the leader of Podemos?

SEGUÍN: Sure. So Pablo Iglesias is a very interesting person, because he is a professor. He was a professor at the Universidad Complutense de Madrid. He was a political science professor. But he was an adjunct professor, which is very important to note. So, obviously, he wouldn’t have had, like, a tenure line or anything like that.

But what’s also [incompr.] I think really informs Pablo Iglesias’s politics is his studies of Latin America. So Pablo spent much of his academic work from 2005 basically onwards studying the constituent processes in Bolivia, in places like Venezuela, etc. And also there are also other kind of members of the party, like Íñigo Errejón, who is also political science at the Complutense, an adjunct political science, who is now what some people say the number two or number three in power in Podemos. And he was also a political scientist of these Latin American kind of popular movements that then became governments.

So I think one of the questions that motivates lots of the people like Pablo, like Íñigo, and others in the party is this question of how to turn popular indignation into actual institutions that function for the people.

PERIES: So all of this led to them securing five or six seats in the European Parliament in May 2014.

SEGUÍN: Yes. Podemos picked up 1.25 million votes, which led to five MEPs, as you just mentioned, and 8 percent of the vote which, which let them come in fourth place in the Spanish election.

But this was unprecedented, because Podemos basically came out of nothing within a year.

PERIES: So, Bécquer, let’s take that question up. How did they get 1.2 million votes for elections to the European Parliament in Spain? That must translate pretty nicely locally. So let’s take that up in our next discussion. Thanks for joining us.

Becquer Seguin is an Andrew W. Mellon and John E. Sawyer Seminar Graduate Fellow and Ph.D. candidate in the Department of Romance Studies at Cornell University. He is currently finishing a dissertation on how political tactics like the general strike shaped literature and art on both sides of the nineteenth-century Hispanic Atlantic. His academic writing…