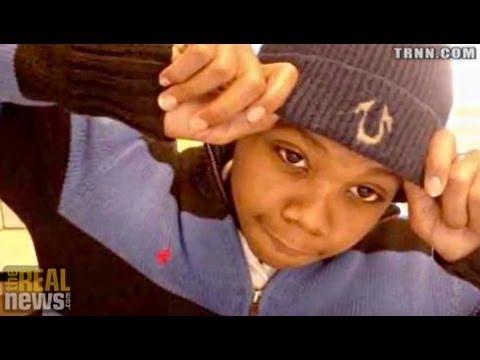 JAISAL NOOR, PRODUCER, TRNN: Calls are growing for an independent investigation into the killing of Kimani Gray, an African-American teenager shot to death by New York police officers under disputed circumstances.

JOSE LA SALLE, ANTI POLICE BRUTALITY ACTIVIST: It’s about justice. And we are tired of be silenced, and we’re trying to let people know it’s time to speak up, especially when police keep killing people and not being held accountable for their actions.

NOOR: On March 9, 16-year-old Kimani “Kiki” Gray was shot multiple times by plainclothes undercover NYPD officers in the East Flatbush neighborhood of Brooklyn. The police have strongly defended their actions, saying they engaged Gray after he threatened them with a gun. Paul J. Browne, chief police spokesperson, said the teenager “produced a revolver and pointed it at the officers, who fired a total of 11 rounds, striking Gray several times.”

But at least one eyewitness has come forward with a different account.

CAMILLE JOHNSON, EYEWITNESS TO SHOOTING: His hands was up, and he was telling them, please stop, please stop. He didn’t have a gun. He had his hands up. The only thing they probably found suspicious was him pulling up his pants, ’cause you know the young boys wear their pants below their waist. He was playing with his pants, probably trying to pull it up. If he had a gun on him, which I doubt he had a gun on him, he didn’t pull it out.

NOOR: In the days after the shooting, Brooklyn’s East Flatbush neighborhood was the scene of raucous protest, heavy police presence, dozens of arrests, and the use of pepper spray against demonstrators. Two stores were looted, several police officers were injured, and some NYPD squad cars had their windows smashed.

Media outlets described the scene as a riot, but some who took part disagree with that characterization. This is a 19-year-old neighborhood resident who did not want to be identified.

UNIDENTIFIED: There wasn’t no riots. It was peaceful protesting. The only reason why they called it a riot: ’cause as we was passing police on the street, we had something to say to them. They were trying to block us in, corner us in in the streets for a peaceful protest. How are you doing that? And then you want to call it a riot people when people are saying [incompr.] and then you want to start shoving and pushing civilians and calling it a riot, that’s your own fault. We’re not pushing on police. That’s stupid. It’s not a riot. It’s a peaceful protest. The only reason why it’s so peaceful today: ’cause we got news camera people and all other types of reporters out here protesting with us.

NOOR: The officers who shot Gray, Sgt. Mourad Mourad and Officer Jovaniel Cordova, have been put on administrative leave pending an investigation. The City of New York has previously settled lawsuits alleging the same officers with abuse for over $200,000.

Gray’s funeral was held on March 23, and the next day, supporters of Gray marched from spot he was shot to the local 67th police precinct. Many echoed Gray’s mother, Carol’s calls for an independent investigation.

YOLANDA MATTHEWS, PROTESTER: I want to see an investigator not from the police department, general inspector, attorney that oversees the police department that’s not in the governor pocket, private entity that can bring justice. And New York State, among the NYPD, who we pay taxes for.

UNIDENTIFIED: I want to see them two cops brought to justice. I want to see them locked up. There’s five other federal lawsuits I read about in the paper. They cost the state $215,000 exact. This is crazy. It doesn’t take five lawsuits to put somebody behind bars. If it was me, if it was anybody in this crowd right now, it would have just took one gunshot to put us behind bars. But it takes five federal lawsuits to get a whole crowd of people out? Come on.

KIM WILLIAMS, BROOKLYN RESIDENT: Once an officer has so many civil rights violations, I don’t understand how many more it takes for something like this to come out. I mean, it was only bound to happen, because I think if it would have been addressed and handled differently, this wouldn’t have happened.

NOOR: Many say this incident underscores the need for an independent oversight over the New York Police Department. A tentative deal to create such an oversight body was reached by the New York City Council last week. New York Mayor Michael Bloomberg has promised a full and fair investigation into the killing of Gray, but vehemently opposes an independent inspector general over the NYPD.

UNIDENTIFIED: I tell you everything I wanted to change, but it’s never going to change, though, at the end of the day. Like the detective in the 71st precinct told me, “I’m a cop. I do what I want. You have no say. I do.” After that, enough is said. Enough is said after that.

NOOR: Reporting for The Real News, this is Jaisal Noor in New York.