Brazil’s Election ‘No Surprise’ – Are the Left’s Fears of Bolsonaro Justified?

While it was no surprise that right-wing extremist Jair Bolsonaro won Brazil's presidential election with 55% of the vote, it was with a smaller margin than originally projected. Now comes the great danger for the country's minorities and opposition forces, says Alex Hochuli

While it was no surprise that right-wing extremist Jair Bolsonaro won Brazil's presidential election with 55% of the vote, it was with a smaller margin than originally projected. Now comes the great danger for the country's minorities and opposition forces, says Alex Hochuli 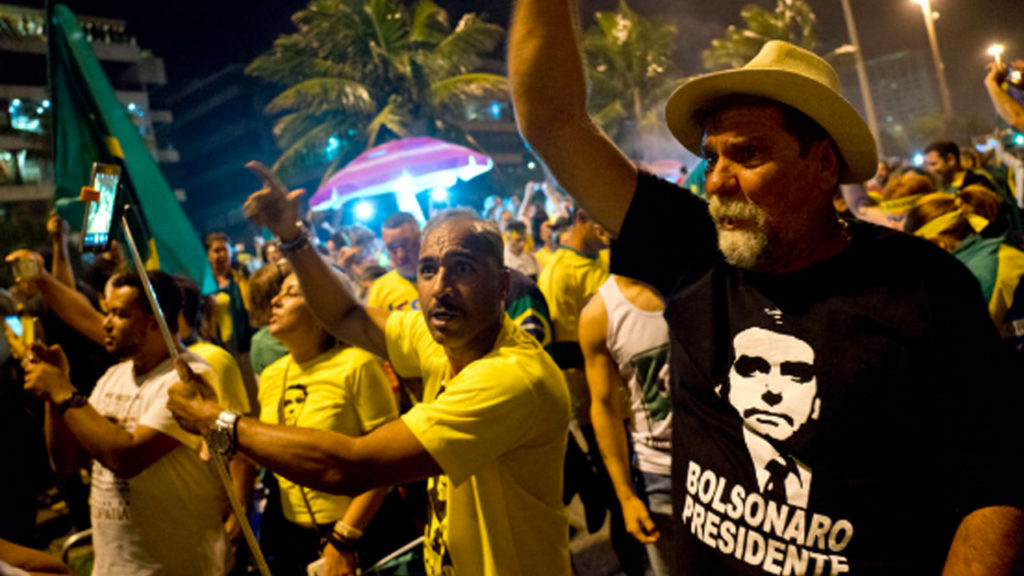 Brazil, the world’s fifth-largest country and the ninth-largest economy went extreme right, perhaps even fascist, on Sunday with the election of Jair Bolsonaro of the Social Liberal Party, PSL. He won the presidential runoff election with 55 percent of the vote against Workers’ Party candidate Fernando Haddad, who received 45 percent. This is a smaller election victory for Bolsonaro than some of the most recent opinion polls had predicted, yet it remains a staggering blow to Brazil’s democracy and to Brazil’s social movements. After the results were announced, the defeated candidate Fernando Haddad had the following to say to his supporters.

FERNANDO HADDAD: I put my life at the disposal of the country. I am sure that I speak for millions of people who have put the country above their own lives, above their own welfare. I want to say to them that when I looked out onto the streets of the country to all regions, I felt an anguish and a fear on the faces of many people, who sometimes cried. Don’t be scared. We will be here. We are together.

SHARMINI PERIES: Jair Bolsonaro gave only a brief statement to the press, where he seemed to echo some of President Trump’s talking points about developing a foreign policy that would be of great benefit to Brazil.

JAIR BOLSONARO: We will liberate Brazil and the foreign ministry from the ideology of its international relations that it has subjected Brazil to in recent years. Brazil will no longer be different from the countries of the developed world. We will seek bilateral relations that add to the economic and technological value of Brazilian products. We will restore international respect for our dear Brazil.

SHARMINI PERIES: President Trump immediately called Bolsonaro, and followed up with a tweet, saying: “Had a very good conversation with the newly-elected President of Brazil Jair Bolsonaro, who won his race by a substantial margin. We agreed that Brazil and the United States will work closely together on trade, military, and everything else. Excellent call, wished him congrats,” he said.

Joining me now to discuss what the election results means for Brazil is Alex Hochuli. Alex is a researcher and communications consultant based in Sao Paulo. He blogs at AlexHochuli.xyz. Thanks for joining us, Alex.

ALEX HOCHULI: Thank you for having me.

SHARMINI PERIES: All right, Alex, let’s start off with getting your reaction to the results from last night.

ALEX HOCHULI: Well, it’s incredibly grim, but it’s also unsurprising. I mean, it’s something that we were expecting already from the eve of the first round, certainly after the first round. I think if we want to draw some positives from it, it is the fact that Bolsonaro won by only 10 points, rather than 20 or more points, as might have happened, as the polls were showing about two weeks ago. And it’s also the fact that there were a huge number of abstentions and blank null ballots. So something like 58 million people voted for Jair Bolsonaro, but 90 million did not, split between 40-odd million voted for Haddad, and the rest being, as I said, abstentions, blank and null votes.

SHARMINI PERIES: All right. So in terms of the opposition candidate Haddad, what is the PT and the movements behind PT like MST and others saying about the results, and how they’re going to face a Bolsonaro presidency?

ALEX HOCHULI: Well, I mean, it’s notable that Haddad didn’t really congratulate Bolsonaro immediately. And there was talk immediately of resistance, of we are here for you, don’t feel too disheartened, don’t be afraid. Because I think- you know, it’s obvious that people are afraid, both in terms of minorities, or a majority black population, people living on the peripheries of the big cities, as well as the left as a whole. Leftist organizations, social movements and so on have a lot of reason to be afraid, because Bolsonaro has been remarkably consistent in what he has said about what his intentions are in terms of, well, effectively curtailing the activities or even smashing these organizations.

I think it’s notable that in his address upon his victory last night, he talked about we’re done with flirting with socialism, communism, populism, and all sorts of extremism in Brazil, which of course to anyone who knows Brazil there hasn’t really been any massive communist threat or anything of the sort. So I think that sets out Bolsonaro’s stall quite clearly, and is a great cause for concern.

SHARMINI PERIES: Now, Alex, many people are comparing Bolsonaro’s victory to that of Duterte in the Philippines, or to President Trump. Now, the extreme statements that Bolsonaro has been articulating, things like I’ll give carte blanche for the police to kill this group, in reference to leftist groups and social movement organizations; he says if they want to stay here, they will have to put themselves under the law. All of us, under the law of all of us, he says, or leave or go to jail. These red marginals, he said, will be banished from our homeland. He’s been making these terrible, extreme comments. Do you think he’ll stay true to that once he’s inaugurated?

ALEX HOCHULI: I think the sad thing is that we can draw all sorts of sort of prognoses about what his rule will be like. Some more dimly than others. But I think one thing that will certainly happen is an increase of violence towards minorities, whether carried out by state forces, as in the police or the army, or by parastate forces like militias, or even just by the sorts of bullies that compose the core of Bolsonaro’s support. So that really is something that is concerning.

I also think that, you know, when we make the comparisons with Duterte or Trump, I think we have to be careful. In fact, I feel like I’ve spent the past 48 hours arguing with people saying that Bolsonaro is not a Trump, that it is not a useful analogy. Everything that Trump does is still in and through American institutions, within the bounds of legality. And the United States is, in relative terms, a peaceful country compared to Brazil. In Brazil there would be a lot more leeway for violent reprisals to be carried out.

In the countryside this is something that already happens. Landless peasants leaders are often executed, and in the Amazon, as well. And this is something which will be, which looks set to increase, because a lot of people will be let off the leash. There won’t be, the law won’t come down on those who carry out massacres in the countryside, for example. So there’s a lot to be concerned with there, and I think that is one of the more likely- of all the scenarios we can think of, that is something that is very likely to happen.

SHARMINI PERIES: All right, Alex. Of all the troubling things that Bolsonaro has articulated and expressed, perhaps the most disturbing one has been a positive attitude towards Brazil’s 1964-1985 military dictatorship. Now, given that he himself is coming from the military, how serious is this kind of statement? Is it campaign rhetoric, or is it something that is truly possible given what he’s been saying?

Now, I don’t think that he will mount a military coup, whether it’s a soft coup or a hard coup and let the military in. He will have military generals as ministers, but I don’t think his first recourse will be to break with the Constitution immediately. I think he will try to play by the rules.

If we want to talk about what his government will look like, I think we have to consider that … You know, Congress remains very fragmented. His PSL party is the second-largest party in Congress, but still only represents a small minority within it. There will be other parties favorable. But the way the Brazilian politics works is that there is a lot of horse trading that needs to go on, and Bolsonaro has come into government saying, I don’t want to do any of that. That’s all corrupt. You know, this- Bolsonaro riding a supposed anti-corruption wave. But the fact is, he will have to deal with that. And if he if he doesn’t deal with that, if he doesn’t engage in that horse trading, he’s not going to be able to pass the really swinging neoliberal reforms that are being demanded of him by his elite backers. That will create problems for him, and I think that may be a sort of glimmer of hope that he will not have an easy ride, neither in Congress, nor necessarily from certain sections of the media who he has singled out as enemies already right off the bat.

SHARMINI PERIES: All right. Now, let’s switch over to the opposition here. Now, PT will form the official opposition. And one of the reasons that PT didn’t win this election when Lula had so much support, and polls were indicating that if Lula had been the candidate he would have won this election. Now, given this scenario, what is Congress looking like? Will PT still have to form some sort of an alliance with one of the other left parties? And if they do so, can they actually prevent Bolsonaro from doing some of what he had articulated?

ALEX HOCHULI: PT on its own, and even with the left parties, won’t be able to singlehandedly prevent this. But as I said, Congress is very fragmented, and it’s a very messy place in which a lot of horse trading has to go on. There are 513 deputies in the lower house of Congress, and PT has 50-odd of those. There’s a radical left party which has another 11. But there’s a lot of other parties who are just there to make up the numbers. They are not ideological parties. And there are people who are traditionally there to be bought off by the government, who have their support bought off either by pork barrel spending or through more illegitimate, sort of backdoor means.

So that is something that they’ll have to deal with. I think that will create problems for Bolsonaro. PT on its own, you know, I think will still try to play the institutional game as much as possible, but I think it will be a question as to how much that remains possible.

ALEX HOCHULI: Thanks for having me.