Pope Francis impressed Brazilians with his modest lifestyle and sympathy for the poor, but he did not support the mass struggle for economic justice and instead echoed the right-wing focus on corruption in government

Pope Francis impressed Brazilians with his modest lifestyle and sympathy for the poor, but he did not support the mass struggle for economic justice and instead echoed the right-wing focus on corruption in government 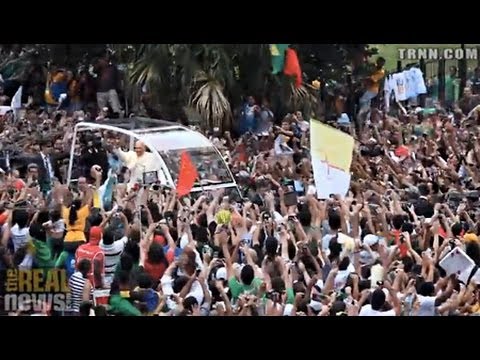 NERITA OEIRAS, TRNN PRODUCER: In Latin America, [incompr.] vast majority of Catholics in the world, Catholicism is historically linked to both the right and left traditions. The Church played an important role during dictatorships, supporting an anti-Communist speech and reinforcing the values of the traditional family.

But it also nourished the growth of social movements when the liberation theology, a movement born inside the church, started to question Latin America’s marginalized position in the world and encouraged political, economical, and social liberation of the local population during the ’60s, a period when dictatorships reached their peaks.

More recently, in Brazil, a country where 65 percent of the population identifies as Catholic, the Vatican was losing ground to a boom of neo-Pentecostal churches thriving mainly from lower middle class to low economic classes. The Church needs to design a new strategy to maintain believers, especially among the youngest [incompr.] and poorest.

Using very simple yet thoughtful strategies to gain popularity, Pope Francis seduced the population, the political class, and public opinion during his first international visit to Brazil last week. Once in the South American country, he took part of the World Youth Day, celebrated from Monday, July 22, to Sunday, July 28.

Since the early days of his papacy, the pontiff tried to assume an attitude of proximity and sensibility towards the less advantaged people. While in Brazil, the Pope used an unshielded car, got stuck in traffic jam, held children, visited favelas, and even accepted tea from a passerby. This attitude is meant to symbolize the beginning of a renovation of the Catholic Church.

Followers of the theology of liberation advocate a more significant political role for the Church. And this movement in the past has been accused by the Vatican of supporting class struggle and violent revolutions.

On a written letter to address our questions, Frei Betto, Dominican friar and a liberation theology prominent figure, declares his support for Pope Francis’s austere gestures.

FREI BETTO, AUTHOR, LIBERATION THEOLOGIST, AND DOMINICAN FRIAR (TEXT ON SCREEN): Pope Francisco started the Church’s reform with the reform of his own papacy: no mantle, no red shoes, no cross, no golden ring, no shielded vehicle, no pontiff’s palace, etc. He is diverting the church from its monarchic vests and gestures. He shows a strong sensibility with poverty. I am convinced that the Catholic Church is entering a new era, one where it will be a worldwide voice for the voiceless people.

OEIRAS: While the Pope visited Brazil, the voices on the streets were still struggling to be heard. The population identified that the pope’s visit could uplift the protests and renew the debate about subjects like the lack of ethics of the political class.

UNIDENTIFIED (SUBTITLED TRANSL.): We need to take advantage that today several authorities are gathered to receive the pope and carry on with our demands. The government is forgetting, is fooling the people, and nothing is happening with our claims. So this is the time to put pressure and be stronger.

UNIDENTIFIED (SUBTITLED TRANSL.): We don’t want to be against the Pope or the Church. Maybe some people here are, but very few people. We just want the world to know what goes on in Brazil, this unexplainable ripoff of our public money. The protest will not stop, and Brazil leaves a message: tomorrow the protest will be bigger.

OEIRAS: In another act of support during his public speeches, Pope Francis has shown solidarity to the population claims and protests, referring to the lack of trust in the public administration and emphasizing the need to establish a dialog with the population. While addressing the youth on Friday, July 26, the pontiff declared:

POPE FRANCIS (SUBTITLED TRANSL.): In the cross, Jesus is next to the youth that lost trust in political institutions because they see their egoism and corruption.

OEIRAS: And while giving a speech to politicians on Saturday, July 27, the Pope gave to the political class the following advice:

POPE FRANCIS (SUBTITLED TRANSL.): I think that to face our present, a constructive dialog is fundamental for us to achieve an integral humanism that respects culture and responsibilities. Between the egoistic indifference and the violent protest, there is always one possible solution: dialog.

OEIRAS: However, the consistency of the pontiff’s modest attitudes, his public speeches, and the reality of the Catholic Church could be questioned. The Vatican, the institution represented by the Pope, is still one of the world’s richest and more powerful institutions, and many think it could do much to implement real improvements regarding life conditions of the poorest.

Frei Betto believes that the Church should fight poverty, but fighting against the real causes of poverty that he sees as the structures of capitalism.

BETTO: From the patrimonial point of view, the Church is indeed a very rich institution. Cathedrals like Saint Patrick in New York, Sé in São Paulo, Notre Dame in Paris belong to the Church. Even if the Church would sell Saint Peter’s Basilica, and the Sistine Chapel, and give this money to the poor, that still wouldn’t solve the question of poverty. That would only relief, briefly, the suffering for some of the poor. What the Church should do is to fight the causes of poverty: the capitalist system that, as the Pope mentioned in his first interview, trembles in fear when the stock market falls by four or five points, but it is indifferent when the number of undernourished surpass the 1 or 2 billion people.

OEIRAS: However, the strategy behind these speeches could be the one needed by the Church to maintain its hegemony in Latin America. It is unquestionable that Latin America plays a protagonist role in the 21st century’s world order, when the region grows to a more permanent place in the international economic panorama, with Brazil as the sixth world’s large economy in 2030, surpassing countries like Italy, U.K., and Russia. Therefore a Latin American Pope appearing sensible to social issues could be the Church’s strategy to mediate and negotiate its own interests within the new dynamics of the contemporary Latin America, a region of the world where we can find the largest number and percentage of Catholics.

WALLACE LOPEZ, HISTORIAN AND PHILOSOPHER, RIO STATE UNIVERSITY (SUBTITLED TRANSL.): This pope faces a very interesting time, when he needs to negotiate a series of subjects, as gender, housing, work, and mainly the utopia of a revolution to be inserted in Latin America’s agenda.

Since the ’80s, Latin America needs to tell its own history, meaning it needs to put itself as a protagonist of the Western history. And so the Pope is not addressing Latin America because of affection, or due to the fact that he himself is Latin American. No. He addresses Latin America with a political discourse, facing the question of the rearrangement of the flock, which is now connected to social demands.

OEIRAS: In an international panorama where adaptation [incompr.] survival in order to maintain the role of the Church, a role that certainly goes beyond spirituality, the Pope needs to address contemporary issues, both in the political and the economical arena.

Despite his apparently austere posture, it’s still unknown how much will Pope Francis do to reform the Church. A start could be to exit the comfort zone of the diplomatic answers to objections towards the Church’s dogmas. Another way would be to support the People’s struggles for better health, public transit and education, gender struggle, that is, [incompr.] a posture that would imply not only charity from the richest, but to encourage the population in the fight for their recognition of their rights as citizens, that is, support the demands of the mass protests held during the Pope’s visit to Brazil. Instead, the Pope echoed the slogans of the right, something that could help right-wing parties in the next elections.

Reporting from Rio de Janeiro for The Real News, this is Nerita Oeiras.