Despite cuts to the state housing budget and the criminalization of housing movements in Sao Paulo, thousands of poor Brazilians remain in occupied buildings across the city, demanding their social right to housing.

Despite cuts to the state housing budget and the criminalization of housing movements in Sao Paulo, thousands of poor Brazilians remain in occupied buildings across the city, demanding their social right to housing. 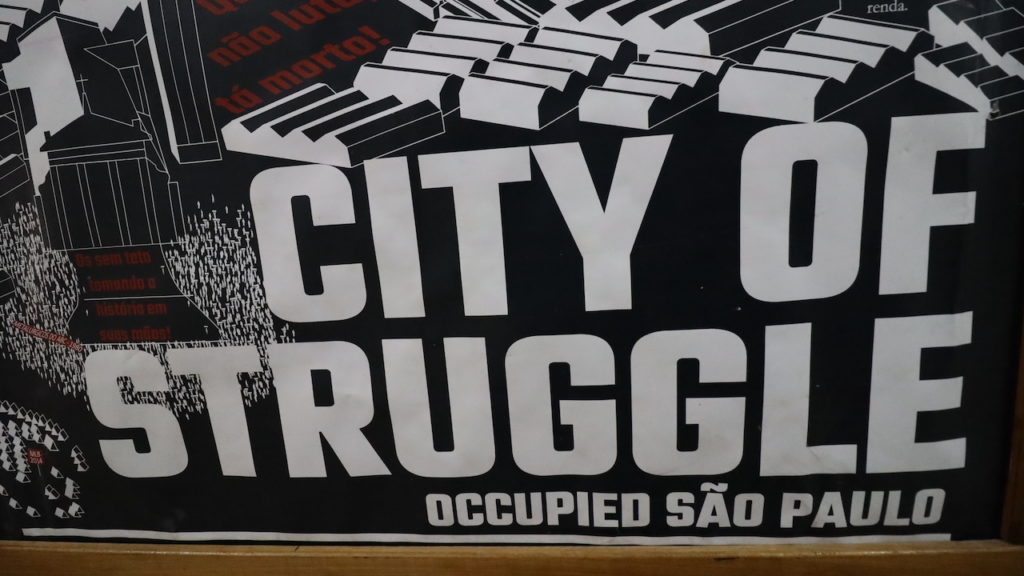 Sao Paulo. Brazil’s financial capital. Population over 12 million. The largest city in the Americas
and one of the most expensive real estate markets in Brazil.
It’s also home to one of the biggest housing occupation movements in the world. 45,000 families in greater Sao Paulo live in housing occupations.
This is 9 de Julho, one of the most organized building occupations in the city. It’s run by the Homeless Movement of the Center, one of Sao Paulo’s most active housing movements.
Claudete Lindoso has been living here since they occupied this vacant former social security building 3 years ago.
Claudete Lindoso, Resident, 9 de Julho
“It’s good for you to see this… everything that we’ve done to transform this completely deteriorated and abandoned building, without any social good. We’ve transformed it into our home.”
Today, more than 120 families live in the 14-story building, which includes communal kitchens, a children’s library, meeting rooms, soccer courts, a thrift store and a wood-working shop. Residents pay no rent. Only a monthly maintenance fee of $50 per family. They hold weekly assemblies and run the building collectively.
Claudete helps to coordinate the 10th floor, where she lives in her 2-bedroom home with two kids and one grandchild.
Claudete Lindoso, Resident, 9 de Julho
“We occupy buildings that have no social good. A building that has been abandoned for 10, 15, or 20 years. And we pay for that building to be standing. It’s our taxes that pay the bills for these buildings, which are filled with debt. And we come into a deteriorated building and we transform it into our home.”
The occupations are a means of survival for many low-income Brazilians. Their organizing is based on the social right to housing, which is written into the 1988 Brazilian Constitution. It’s been the foundation for housing organizing in Brazil for more than 30 years. Victories have been won. But not without a fight.
Anderson Kazuo Nakano, Federal University of Sao Paulo
“The idea of housing as a social right has always been in conflict with the idea of housing as a commodity. A product accessible through buying and selling deeds. But accessible only to those who have the means to pay or acquire loans. This tension has always existed. But in recent years, it’s gotten worse.”
Occupation residents have been evicted and their leaders jailed. Last year, more than a dozen leaders of Sao Paulo housing movements, including the Homeless Movement of the Center, were accused of extortion and other charges, which the movements say are completely false. Four leaders were imprisoned and held for more than 100 days. Preta Ferreira was one of them. She is a well-known artist and culture activist, who presented the free Lula news bulletin. She lived for many years in a previous occupation at 9 de Julho.
While she was jailed here, last year, she was interviewed by the grassroots network TVT.
Lorena Ferreira, Preta’s sister
“They are criminalizing the movements. Because we are making noise. We are annoying them. But if the government did its job, you wouldn’t need a movement or an occupation. If every citizen has his or her rights guaranteed, you wouldn’t need a movement.”
For organizers, last year’s imprisonments are part of a larger crackdown on grassroots and housing movements in the city.
Benedito Roberto Barbosa is a long-time housing activist and Sao Paulo human rights lawyer.
Benedito Roberto Barbosa, Union of Housing Movements
“We are facing a very real war, a very real attack against housing movement rights in the center of Sao Paulo. And in Brazil, since the 2016 coup, things have gotten worse with an increasing agenda of hate against marginalized and vulnerable populations, black communities, LGBT, and women.”
Meanwhile, Sao Paulo’s right-wing governor Joao Doria slashed more than half of the state’s housing budget this year. Instead, he’s pushing for-profit public-private initiatives which he says will do the job of tackling the low-income housing deficit.
Housing movements don’t buy it. Groups, like Benedito’s Union of Housing Movements, have marched in protest, demanding real affordable housing.
According to researchers, Sao Paulo, alone, needs 400,000 new low-income homes, and 800,000 current low-income homes need improvements.
Claudete Lindoso, Resident, 9 de Julho
“They don’t want us here. They don’t want poor people living in the center of Sao Paulo. And even more paying a low cost. That’s not interesting for the government. What’s interesting is real estate speculation, where they sell buildings for absurd prices and the real estate companies pass them on to higher classes for even higher costs. Costs, which the poor will never be able to pay. So what the movement has done is amazing. It’s what the government should be doing, because it’s working out. It should be putting the poor, the lower classes, in the center of Sao Paulo.”
Michael Fox, The Real News, Sao Paulo, Brazil

Baltimore Takes Aim at the Predatory Capitalism that Spawned Trump