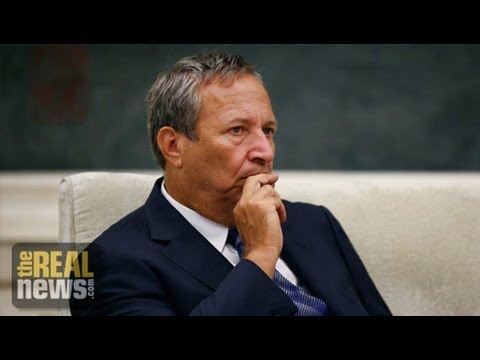 There’s a lot of talk about who President Obama will nominate as the new chair of the Federal Reserve. CNBC is reporting that he will choose Larry Summers. And the other possible option is Janet Yellen, who is now second in command at the Fed. At the same time, the president is also pushing for new financial regulations as a part of the Dodd-Frank act.

Now joining us to discuss all this is Bob Pollin. Bob is the founder and codirector of the PERI institute at the University of Massachusetts Amherst. And he’s also a regular contributor to The Real News.

PROF. ROBERT POLLIN, CODIRECTOR, POLITICAL ECONOMY RESEARCH INSTITUTE: Thank you very much for having me on, Jessica.

DESVARIEUX: So, Bob, can you give us a bit of a breakdown about the implementation process of the Dodd-Frank Act? I think most people, most of our viewers know that in 2010 it was passed, and they think that things are being implemented already. Are regulators really designing new rules, or simply trying to implement Dodd-Frank?

The problem with Dodd-Frank was that it really set out very general guidelines as to how to regulate the financial markets and left it to the specific agencies in Washington to lay out the specific rules. Now, as of this past week, a report that I read said that 60 percent of the deadlines for rulemaking have not been met. The rules have basically not been written, even though we now have 13,000 pages of documents in which rules are being specified. But we haven’t even gotten to the endpoint.

So the story as to what Dodd-Frank really means, what we really intend to do with respect to regulating finance to make our economy more stable and to prevent another crisis comparable to the devastating great recession that we’ve been through, we don’t have the tools in place yet, even though Congress actually did pass something over three years ago.

DESVARIEUX: Okay. So is the regulatory process at all related to the nomination of Summers?

And Larry Summers plays this crucial role. Not only is he a public official, but he is a very well known, sophisticated economist. And on top of that, he had been, in his academic writing, in support of financial regulations. Once he became a public official under Clinton, all of a sudden he became a very aggressive deregulator, such that even the person who was the head of one of the regulatory agencies, the Commodity Futures Trading Commission, who argued–her name was Brooksley Born–she argued on behalf of regulating derivatives, the most dangerous financial products, and Summers was vehement in opposing it. So, actually, if you had to trace the collapse of the 2007-2009 financial crisis on one person–and, of course, you can’t really trace it to one person–but if you did, I think you could make a fair argument that Larry Summers is more to blame for the financial crisis that we experienced than any other person. So why in the world are we putting him in charge as the government’s top financial regulator to implement these rules that are coming out with Dodd-Frank? Clearly the reason is that Wall Street is fighting like mad to put Larry Summers in so the government will go soft on Wall Street and we still won’t have good financial regulations.

DESVARIEUX: Okay. Let’s talk about the president’s other possible choices, who is Janet Yellen. Can you talk about her? What’s her track record on regulation?

And part of her track record is, like the current chair, Bernanke, she actually has noticed that we have an employment crisis, and she has fought for the Fed to take steps to fight unemployment. To my mind, the steps that she supports and Bernanke supports have not been strong enough, but they’re stronger than anyone else has advocated. So among the plausible candidates, Yellen is a very strong one, one that I think certainly merits the appointment, way, way over Summers.

DESVARIEUX: This is a question that we’re certainly asking over here at The Real News as well, Bob. Thanks so much for joining us.

POLLIN: Okay. Thanks for having me.

DESVARIEUX: And thank you for joining us at The Real News Network.