Bob Pollin: Education spending is the best job creator - so why are local and state governments firing teachers and closing schools?

Bob Pollin: Education spending is the best job creator - so why are local and state governments firing teachers and closing schools? 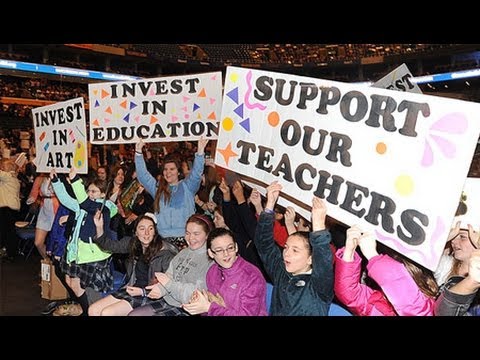 JAISAL NOOR, TRNN PRODUCER: Welcome to The Real News Network. I’m Jaisal Noor in Baltimore. And welcome to this week’s edition of The PERI Report.

Now joining us is Bob Pollin. He’s the founder and codirector of the PERI institute in Amherst, Massachusetts. His latest book is Back to Full Employment.

Thank you for joining us, Bob.

ROBERT POLLIN, CODIRECTOR, POLITICAL ECONOMY RESEARCH INSTITUTE: Thanks very much for having me on.

NOOR: So, Bob, the Labor Department just announced that productivity growth is going to be weaker than expected, and some are going to argue that this growth is temporary and that we need to focus on austerity measures. What’s your response?

As we’ve talked about in a lot of previous instalments of this, we now know from our own research here in PERI that the single most important piece of research in support of the austerity agenda, by Carmen Reinhart and Kenneth Rogoff of Harvard, was wrong. It’s just wrong as a piece of research, this notion that when government’s public debt exceeds 90 percent of the country’s GDP, that we are going to experience precipitous declines in economic growth. Our own paper showed that to be wrong, and so that the argument for austerity based on public debt coming up against that threshold is no longer valid.

Now, at the same time, we have other kinds of evidence in both Europe and the United States now that also weakens the argument for austerity. For example, we have the evidence from both the U.S. Social Security Trust Fund and the Medicare Trust Fund that the finances in both cases are not facing the kind of dire straits that have been described over and over and over again by the austerity hawks.

So, for example, in the case of U.S. Social Security, the security hawks have been arguing that Social Security is unsustainable. Even the Obama administration itself has proposed this provision to reduce the cost-of-living payments for Social Security through this so-called technical fix. What it really [incompr.] cuts in Social Security, most especially for the long-term aged in the population. So the arguments for that have weakened because we now know that the Social Security Trust Fund is more solvent than previous estimates.

On top of that, we have the case, the situation in Europe where the European commission just last week announced that it was relaxing its austerity conditions in some of its main member countries, such as France and Spain and Norway. Why? Because the unemployment crisis is not going away. It’s stuck or getting worse. The overall European Union, Eurozone unemployment is at 12.2 percent. It’s not going down. It’s going up. So the arguments that austerity was somehow necessary because the debt levels were too high or austerity was necessary because austerity could actually be a solution to mass unemployment, those arguments have evaporated.

NOOR: Bob, so it’s good to hear that in Europe the discussion is at least slightly moving away from austerity. But it seems like, as you said, in the U.S. on a federal level and at a local level, you take a look at what’s happening in public schools around the country, the idea is still you have to close these schools down, let go of teachers. Why is that–this discussion, this revision of our justifications for austerity, why hasn’t it come over to the U.S. yet on a local or federal level?

POLLIN: Well, you know, the case in Europe is still hovering. It’s not like the official government positions are, oh, we’ve given up on austerity, now we’re going to promote expansion and target employment. What we’ve seen, though, is a turning of the corner in that the European Commission has said, we are going to temporarily relax the austerity conditions. So that’s just a turning of the corner.

Where are we in the U.S.? I think we might be more or less in the same place, though we haven’t seen enough evidence. Yes. So what we’re still seeing in the U.S., as you mentioned: we’re still seeing cuts in public education. Now, this is bad on its own terms. Public education is a foundation of any democratic society. And it’s also bad in terms of jobs. Spending on education is one of the best ways to create jobs, and it’s maybe the best way insofar as we already have an infrastructure in place called the system of public education at the state level, at the level local level. And when you spend $1 million on education, you’re going to create 27 jobs. Compare that with spending on the military. You spend $1 million in the military, you create 11 jobs. So you create two and a half times more jobs per dollar of expenditure by investing in education. And the most extensive system of education we have, obviously, is public education, to say nothing of the good it does for the community and for young people to have a decent public school in the community.

NOOR: Now, how much of the blame for this can we lay at the feet of the Republicans, when in many cases you have the Obama administration pushing these same policies on a federal level and places like in Chicago where you have a Democratic mayor, Rahm Emanuel, doing the same exact thing, closing 50 public schools this year?

With respect to public education, I mean, the fiscal deficit is coming down–too fast in my view. But in any case, if we want to create jobs in the economy, you invest in education. Education, as I said, creates 29 jobs or 28 jobs per $1 million of expenditure. Military creates 11. So two and a half times more jobs per dollar of expenditure. So why would we be cutting education now when we’re trying to fight unemployment? The answer is: we shouldn’t. And the Democrats should be the ones standing up fighting for that. In fact, as you said, for example, in Chicago we’re still talking about closing schools. We shouldn’t be closing schools. We should be expanding schools. We should be improving schools. It should be a cornerstone of the recovery.

NOOR: What’s it going to take the change the conversation here?

POLLIN: Well, you know, the problem, I think, as you indicate, really lies in large measure with the Democrats. The Republicans are not going to change their line. They want to see Obama embarrassed. They want to–in 2014 election, they want to say Obama’s a failure, we can’t toss out [inaud.] let’s toss out governors, state governments, and move our right-wing agenda forward.

Now, in Europe, that’s where we are. The austerity economics is now at the point where they’re saying, let’s soften the austerity agenda. And that’s probably going to be the first step that we see emerging out of the Democrats. But what we really need is step two, which is full-force austerity economics is bad. I don’t think that there are a lot of Democrats that will argue that. There are some, of course–Bernie Sanders has been very forceful on this and Keith Ellison in the House of Representatives and a few others. But we have to reverse the logic. We’ve got a long way to go.

NOOR: Thanks for joining us, Bob.

POLLIN: Thank you very much for having me.