Economists Join the Fight For $15!

PERI Economist Bob Pollin talks about his new co-authored petition calling on economists to support an increase of the federal minimum wage to $15 by 2020.

PERI Economist Bob Pollin talks about his new co-authored petition calling on economists to support an increase of the federal minimum wage to $15 by 2020. 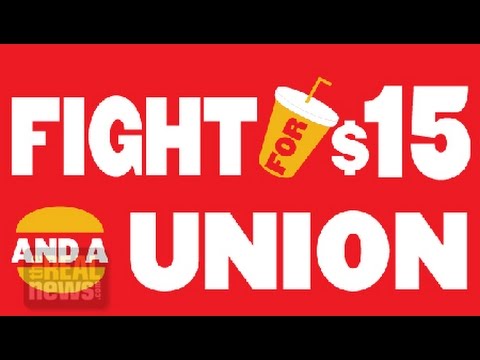 Though it at times feel as though there is an insufficient awareness of it, the fact remains that currently there is indeed a struggle among working people around the country to increase the minimum wage. Called at times the Fight for 15, or the fight for a $15 an hour minimum wage, this movement is attempting to only partially adjust upwards the pay working people should receive based on years of inflation and wildly increased worker productivity.

Our next guest is a co-author of a new petition, Economists in Support of a $15 U.S. Minimum Wage As Of 2020, and argues in part that while $15 an hour would be an improvement it would hardly cover what a properly adjusted wage should be. Bob Pollin joins us now from UMass Amherst, where he is an economist and researcher with PERI, the Political Economy Research Institute. Welcome back, Bob Pollin, to the Real News.

BOB POLLIN, ECONOMIST, PERI: Thanks very much for having me on.

BALL: So could we start there with the minimum–what the minimum wage should be, based on as I said in the introduction, inflation and worker productivity.

POLLIN: Well Jared, if you start with the highest level of a minimum wage after adjusting for inflation in the United States, surprisingly that was in 1968. That’s almost 50 years ago, now. That adjustment for inflation, the minimum wage in 1968 was $10.85 an hour. The federal minimum wage, everywhere in the country. So if you were a 16-year-old starting a new job at McDonald’s somewhere in the middle of Texas or Nebraska, you had to get $10.85 an hour if the company was obeying the law. That was in 1968.

So if you make that adjustment, today the minimum wage should be $26 an hour.

BALL: Wow. No, I mean, I think that’s shocking. And it reminds me of Malcolm X’s statement some years ago that if a man plunges a knife nine inches in your back and offers to pull it out six he shouldn’t be thanked. But that is in fact what we’re asking, or many of us in support of this move are asking by just requiring or requesting a $15 minimum wage.

So as you said in this, in your petition, there are some states who already pay above the minimum wage, making the case for this it would seem a little it easier to make, no?

POLLIN: As it is, 29 states and Washington, DC all have minimum wage rates above the federal minimum. The federal minimum, today, is $7.25 an hour. Twenty-nine states plus the District of Columbia have wage rates minimum between $7.50 and $9.50 an hour.

Now, if you look at the, what’s happened in those states, you don’t see higher rates of unemployment. You don’t see mass layoffs. You don’t see overall conditions for workers having worsened. In fact, of course they are better because they have a higher wage rate. So we do have evidence from those states that show that having the higher minimum wage is completely compatible with maintaining job opportunities.

BALL: Right. Because the right wing opposition to this argues that if corporations or businesses are forced to pay a higher minimum wage they’ll lay people off and it will work against the working population.

Well, first of all, in addition to what you’ve just said, what would your specific response to that critique be?

POLLIN: There is a lot of evidence, it’s been studied now for generations, intensively I’d say at least for 20 years, that shows that when you raise the minimum wage let’s say incrementally, you don’t see any negative employment effects. You don’t see unemployment going up. In fact, the biggest factor affecting unemployment in the country is what we would call macroeconomic conditions. Whether the country’s in a recession, or whether the economy’s growing. So that in 1968 when we were at our peak of the minimum wage at $10.85, the unemployment rate was 3.7 percent. When we had the 1982 severe recession, the unemployment rate was 10.8 percent. The minimum wage had fallen in real dollars to about $8 an hour, from $10.85.

So the main factor causing the unemployment rate going up or down is not the minimum wage, it’s whether the economy’s growing or in a recession [inaud.].

POLLIN: That’s true. I don’t think in and of itself the raise in the minimum wage I don’t think has a major effect on expanding the economy’s markets. It does have a positive effect, but it has–along with other things it would reduce inequality in the economy. It does have a major positive–or let’s say can have a major positive impact in two ways.

Number one, as you said, by expanding demand in the economy, making markets more buoyant, creating more opportunities for business. The second is by having a more equal economy less money is flowing to the top, tippy top, you know, one-tenth of one percent that is going to be speculating on Wall Street, and so that you have less inducement for these kind of destabilizing bubbles that are coming out of financial markets.

BALL: Very quickly as we wrap up here, could you remind–I believe I saw in your petition that there are steps along the way to $15 an hour that you are in support of as increments along the way here. And then please also let our audience know where they can find this petition and hopefully add their names to it.

BALL: So I have to ask this very quickly, is there hope that Congress will sign off on this? Or is, are you suggesting, then, that there is this hope? That this is likely to happen?

POLLIN: I don’t think realistically it’s going to pass. But look, you know, what’s happened a few years ago when the workers started a movement on behalf of the $15 minimum wage it was considered a joke. Nobody paid the slightest bit of attention to it. Since they started we have had $15 minimum wages pass. In Seattle, Los Angeles, New York, Chicago went to $13.

So this is part of a broader movement. It’s a step. It will push the ball forward, and it’s an important step in that direction whether or not it passes in Congress [this year].

BALL: Well, all right. Bob Pollin, thank you very much again for joining us here at the Real News.

POLLIN: Thanks very much for having me on, Jared.

BALL: And thank you for joining us here at the Real News Network. And for all involved, I’m Jared Ball. And as always, as Fred Hampton used to say, to you we say peace if you’re willing to fight for it. So peace, everybody. We’ll catch you in the whirlwind.