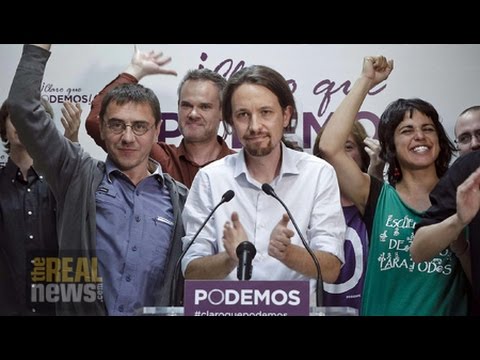 Podemos, meaning ‘we can’ in Spanish, is a left-wing political party in Spain founded by Pablo Iglesias, its leader, and a group of left-wing academics. Podemos is the second-largest Spanish party by a number of members after the People’s Party. El Pais, the newspaper in Spain, now places Podemos at 22 percent ahead of both of the ruling parties. That is, the conservative Partido Popular, also known as PP, and the left-wing opposition, Partido Socialista Obrero Español, known as PSOE. If Podemos is to succeed in winning the next federal election, which will be held at the end of the year this year in 2015, there’s much work to be done in developing an economic platform for governance, and that plan must include strategies to address unemployment in the country, which is currently hovering around 23 percent nationally. And in regions such as Andalusia, it is at 34 percent. If you take a closer look at youth unemployment, it is hovering around 50 percent.

With me today to discuss the economic development strategies available for Podemos is one of its advisors, Professor Robert Pollin. Bob Pollin is a professor of economics and founding co-director of the Political Economy Research Institute at the University of Massachusetts, Amherst. He’s the author of many books, and the most relevant among them for today’s discussion is Back to Full Employment and Greening the Global Economy.

Bob, I want to thank you so much for joining us today.

PERIES: So Bob, Podemos is gaining much ground in its very short life it’s been in existence. Can you begin just by mapping out some of the challenges it’s facing?

POLLIN: Well, the biggest single challenge is coming up with an alternative to the austerity economic agenda that has dominated Spain and much of Europe since the great recession. That’s the agenda that Greece is suffering under now. The Greek people elected a left-wing alternative, Syriza, but the European banks, the IMF, have been trying very aggressively to force Syriza into more and more austerity concessions even though the government was elected as an anti-austerity party.

Now, in Spain you have some of the equivalent thing. You have Podemos having emerged, as you said, only within the last year, year and a half, out of nowhere. And now they are the most, according the polls and the elections, the most important party in the country. They just won the mayoral election in Barcelona, and with a coalition they have a majority in Madrid, the two most important cities in the country. Again, this is after only a year.

But the question is, how do we after, the day after the election, what do we come up with? What do we do? And I have been working with them in coming up with an anti-austerity agenda, and I am going there in two weeks, and will be meeting with members of Podemos and giving some presentations on some elements of the anti-austerity economic agenda.

PERIES: Now, as you referred to, Bob, both Podemos and Greece sort of mirror each other in terms of the magnitude of the problems they’re facing. And Spain is obviously a much larger economy than Greece, and dealing with this austerity issue is a big problem. What are some of the things that you are thinking about at the moment that could help resolve this problem?

POLLIN: The first thing I was asked to work on was the topic I was speaking with you and Paul about on Real News Network back in January, which is a green growth agenda. They’re very, very interested in that, and so I’ve been trying to develop a green growth agenda for Spain, along with my co-authors here at PERI, Heidi Garrett-Peltier and Shouvik Chakraborty.

So really what we’re talking about is something akin to what was in the stimulus program in the United States in 2009, green stimulus, but on a bigger scale. So we would spend about 1.5 percent of Spanish GDP on investments in renewable energy and energy efficiency, and those investments have three massive benefits. Number one, of course, it helps advance the green agenda. And so by, if they kept this up over a decade or 20 years, you could even conceivably think about Spain operating emissions-free. No CO2 emissions, no fossil fuels. Not likely to happen, but could plausibly happen. That’s number one.

Number two, the process of advancing this agenda is going to generate a lot of jobs. We’re looking at something like in the range of 300,000 jobs for the country, which is only about 1.5 percent of the labor force, but it certainly is pushing in the right direction and it will help bring down unemployment.

Number three, Spain depends almost entirely on imports for its energy now. For its oil, coal, and natural gas. So along with building up the renewable energy sector, creating jobs, you’re also reducing your dependence on imports. And that will in turn also keep more money within Spain itself to generate more jobs and create more opportunity within Spain. So those are the three basic features of the program.

PERIES: Now, one of the things that of course is obvious in terms of developing new sectors is, does Spain have the money to actually help develop these sectors?

POLLIN: Yeah. Well, the way–there are basically a couple ways that we can think about paying for this stimulus program. Yes, initially you have to think about borrowing money to do so. But the money could be repaid based on the savings from energy efficiency investments. Energy efficiency investments by definition mean that consumers get the same energy services by using less energy. And so there are financing structures, for example in the United States today now, in which we simply set up a financing arrangement whereby you repay the debt for the initial capital expenditures through your energy saving.

You can also reinforce that through a carbon tax, which is a price on oil or any energy resources that generate CO2 and carbon emissions. So you have the carbon tax. It is a tax, yes, but you return most of the money back to the consumers so they don’t feel any loss of income from the tax. But you take some of that money, and that also can help pay for the initial lending that you’d need to make these investments.

Now, the third source of paying back the debt would be the fact that your oil imports are going down. So oil imports are going to go down every year as you expand the renewable sector, and as you raise energy efficiency standards. So over time you don’t have to think about it as borrowing money, but as saving off of the reduction of imports.

PERIES: Now, in terms of the initial capital investments, now we know and have learned from Greece that borrowing from the big banks and the World Bank and the IMF and the European Central Bank is not the best route to go when you’re trying to counter austerity at the same time. Where do you imagine the initial investment coming from?

POLLIN: Well in this case, this is not simply–this is different than the Greek situation in that, for example, the Greek situation is they’re really looking for funds just to cover basic services, just to cover pension commitments, although pensions have been cut by 50 percent in Greece. So they don’t have an immediate way through which, they don’t have a source of, an obvious source of funds, to make good on the debt. To collateralize the debt.

Whereas in this case in this example we’re setting up, we have our repayment scheme clearly defined in that we’re going to see energy efficiency savings immediately. If we also do the carbon tax we are going to see revenue from the carbon tax immediately. So it is a different situation. And as a result of which, I think that we can think about domestic banking resources as covering the initial funds.

Now, keep in mind also that the savings from the reduction in oil imports is going to be quite formidable. It’s effectively an import substitution kind of model wherein we’re reducing our spending on imports, on fossil fuels, and that thereby we’re returning the money back into the domestic economy, so that’s another source of revenue for these investments.

PERIES: Bob Pollin, these are the kinds of deep, transformative economic thinking we need. And obviously you have the possibility of implementing them with Podemos if it comes to power. Thank you so much for joining us today, and hope you come back after you return from Spain and give us an update.

POLLIN: Absolutely. Talk about what happened, yeah. I look forward to it.

PERIES: Bob Pollin, thank you so much for joining us today.