Cuts to block community grants that fund programs like Meals on Wheels are simply cruel because they don't amount to any real savings for the government, says PERI's Robert Pollin

Cuts to block community grants that fund programs like Meals on Wheels are simply cruel because they don't amount to any real savings for the government, says PERI's Robert Pollin 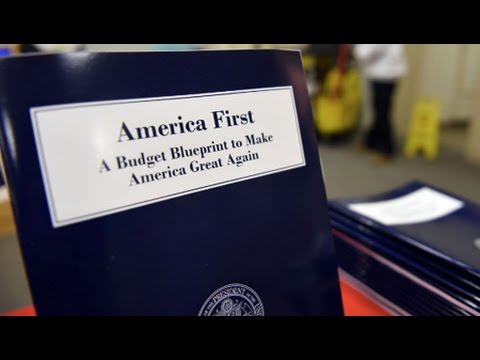 Last week, President Trump released an outline of his budget proposal for 2018. There are massive cuts in spending proposed for most federal agencies, including cutting 19 agencies altogether. They include the National Endowment for the Arts, National Endowment for the Humanities, anything that smells of environmental protection has been cut, and anything with a social safety mandate has also been grossly reduced or cut. Foreign aid, cut. Nutritional assistance programs for women and children under the Agriculture Department, cut as well.

Under the Education Department cuts almost $4 billion in grants for teacher training would disappear in favor of increasing funding for charter schools and private choice programs. Meanwhile, military spending will be increased by $54 billion, and there is also an increase of $2.8 billion for Homeland Security including an initial down payment for building the wall between us, and Mexico.

On to talk about all of this with me is Professor Robert Pollin. He is a Distinguished Professor of Economics and the Co-Director of the Political Economy Research Institute at the University of Massachusetts Amherst. He’s the author of several books. His latest is Greening the Global Economy.

Bob, thank you so much for joining us today.

ROBERT POLLIN: Very nice to be on. Thank you, Sharmini.

SHARMINI PERIES: Bob, last time you were on, on The Real News, that was just after Trump’s address to the Joint Congress in February where Trump proposed dramatic increases in military spending, a dramatic increase in infrastructure spending while reducing taxes, and you had concerns about that, about how he was going to pay for it. So, what does the proposed budget now tell us about how he’s going to pay for these increases?

ROBERT POLLIN: Actually, almost nothing. The budget document, which I was just reviewing this morning, is very thin on details. It’s maybe a bit more detailed than a tweet, but as these budget documents go, it is very superficial. Nevertheless, the things that you raised, that does come through clearly with respect to what his priorities are, and in terms of increasing the military budget.

Which is obviously the number one priority, and the main area of expanded spending, the way that he is proposing to pay for it is to cut everything else, and you enumerated very well the areas that he wants to cut.

SHARMINI PERIES: Let’s dig down into one that’s close to your heart, Bob, and that is the environmental protection and the green jobs, creating green jobs, and so on. A 31% cut to the EPA’s budget. And then I understand from other departments there’s also targeted cuts when it comes to the environment.

For example, the State Department, almost all of those cuts are related to anything to do with climate change, the Paris Agreement, anything of that sort is being cut.

So, give us a sense of the depth of that cut and what it will mean for our environment and for our programs that should be looking at greening our economy.

It’s very clear that Trump gave instructions to the people writing this budget document, to find anyplace where there is a significant amount of spending going on, with respect to environment and climate change, and to cut it.

So, it’s very clear as it… it was clear in his appointments, his Cabinet appointments, that it is a very high priority of Trump to do everything to reverse any kind of policies to defend the environment and combat climate change.

SHARMINI PERIES: Now, Bob, they’ve indicated that this is just an outline and there’s more to come, but what we have so far, how is he going to pay for all of these while cutting taxes?

ROBERT POLLIN: Right. Well, he’s either not going to keep his promise to cut taxes, or if he’s going to cut taxes – which he says he’s going to do – then we have to move into the areas where there’s big money, and he has not touched those, basically, as yet. Well, there’s three areas in the budget where there’s a lot of money. One of them is military and we already know what he’s doing for the military: he’s expanding it.

There are only two other areas in entire federal budget – there are a lot of complicated things in the budget –- but there are two other areas where there’s big money: one is healthcare, Medicaid and Medicare, and the other is social security. So if you are going to cut taxes, and if you are going to expand the military, then the only place where you can get cuts is either through social security or through healthcare. That’s it.

SHARMINI PERIES: And, Bob, what alarms you the most in terms of this budget as far as the… you know, you’ve indicated cuts to healthcare. We talked about a little bit in terms of education. In this kind of drastic cuts, how does that impact on the poor in this nation?

ROBERT POLLIN: Oh, it’s disastrous, as you said, just thinking about the public schools. Public schools, obviously, historically have been the single most important institution creating opportunity for low-income families and to create a decent space for the children of low-income people. Well, he wants to cut that. Substantially. And he wants to give more money to charter schools, to these kind of elite institutions for very small proportions of the population. That’s one thing.

There’s no reason… there’s not enough savings that you can squeeze out of that, but that’s kind of the level at which we’re dealing with this Trump budget.

SHARMINI PERIES: Bob, last time you were on with Paul, just after the Trump Joint Congressional Address, and we were talking about the unemployment rate, and that it’s maybe not in a bad… we’re not in a bad situation at the moment. However, these cuts dramatically affect the unemployment rates, too. I mean, these cuts will put a lot of people out of work. What does that mean in terms of our future here in terms of unemployment?

For example, spending on education on average generates about 23 jobs per million dollars of spending, whereas spending on the military only creates 11 jobs. So, the more we transfer money out of healthcare, out of education, out of social services, that will also then directly affect – negatively -– job opportunities in the country.

SHARMINI PERIES: And will it be compensated, by more increased job numbers, as far as the military is concerned?

It’s actually bad for jobs relative to the other things that the public sector spends on. Healthcare, education, or even infrastructure spending and certainly investing in the green economy are all much better sources of job creation than the military.

SHARMINI PERIES: And you’ve dug into the numbers in terms of what it would take to transition people from, say, dirty jobs to clean, green jobs, and you found that it does pay off to make those investments in terms of a green economy and the transition.

Talk a little bit about it concretely, because for a lot of people it’s hard for them to imagine or some of these things seem abstract, but how does that transition actually work?

ROBERT POLLIN: Well, you know, if you spend a million dollars on retrofitting buildings, for example, which is probably the single best way to reduce greenhouse gas emissions in this economy to date, but believe it or not, I know it doesn’t sound exciting, but retrofitting buildings to make them operate more efficiently is a very high source of job creation.

So, if you spend a million dollars on retrofitting buildings, you’re going to get about 20 jobs out of that — whereas if you spend it on the military, again, you get about 11 jobs. So, it’s twice as many jobs per dollar of spending, and we are basically defending our future by promoting climate stabilization by doing those things.

It’s true, as Trump has touted over and over again. When we pursue a green investment strategy it will mean that there are fewer jobs for coalminers for example, or anything to do with the fossil fuel sector. But actually, there are not that many people employed in the fossil fuel sector. For example, in the coal industry today, there are only 66,000 people altogether in the coal industry.

If we pursue a strong green, positive green agenda, we are likely we can generate in the range of 3 million jobs a year. And there will also be plenty of jobs available to transition people who are presently the 66,000 people who are employed in coal to move them into decent green jobs.

Oh, and by the way, one of the other things that Trump wants to cut is job training in the Department of Labor. One of the big areas of job training is precisely to transition people to provide them with a just transition, out of fossil fuel jobs, and to get them ready, prepared for good jobs in the new green economy.

SHARMINI PERIES: All right, Bob, I think there’s so much more to talk about and as the budget proposal is getting debated, we hope to have you back here for some analysis. Thank you so much for joining us today.

ROBERT POLLIN: Okay. Thanks very much for having me, Sharmini.