Robert Pollin: The Congressional Progressive Caucus's budget would increase spending on education, healthcare and the green economy while rolling back cuts against social services

Robert Pollin: The Congressional Progressive Caucus's budget would increase spending on education, healthcare and the green economy while rolling back cuts against social services 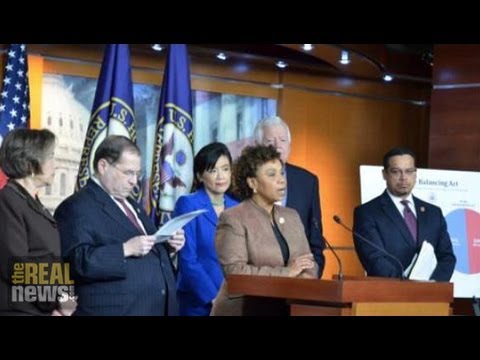 ANTON WORONCZUK, TRNN PRODUCER: Welcome to The Real News Network. I’m Anton Woronczuk in Baltimore. And welcome to another edition of The Pollin Report.

Now joining us is Robert Pollin. Robert Pollin is a professor of economics and a founding codirector of the Political Economy Research Institute at the University of Massachusetts, Amherst.

ROBERT POLLIN, CODIRECTOR, PERI: Thank you very much for having me on.

WORONCZUK: So the Congressional Progressive Caucus recently released their proposal for a federal budget that they claim will add about 9 million jobs to the economy over the next few years. Talk about the budget and whether you think that their projections are possible.

POLLIN: I think it’s a very credible budget that the Congressional Progressive Caucus has put out, the “Better Off Budget”. Let’s start with the things that we know are very straightforward. The projections on job creation are somewhat speculative. But here’s some of the basic things.

The budget that they’ve laid out directly attacks austerity. So that’s number one. That’s really outstanding. So, for example, the cuts to food stamps, I mean, some really basic stuff: 47 million people are facing cuts in food stamps. That’s 15 percent of the population. Twenty-two million children are facing cuts in their access to food. So we are directly attacking food insecurity through the basic budget. So if it didn’t do anything else, just starting there is a really good place to start.

Pensions for public-sector workers, including military workers. The cuts that were enacted under the sequester are reversed.

So all of those things are really critical. They’re all moving in the right direction.

Now, if you spend more money in these areas, obviously, you have to pay for them somehow. So what do they do in terms of taxes? Well, number one, they follow the so-called Warren Buffett rule, Warren Buffett being the multi-multi-billionaire investor who says, in his opinion, he shouldn’t have to pay a lower tax rate than his secretary. And so, effectively they are enacting the Warren Buffett rule by saying that the taxes that are paid on capital income have to be equivalent to taxes paid by people working for a living. Okay? So that’s excellent.

Number two, they are raising tax rates, income tax rates on people making $250,000 and more back up to—only up to the Clinton era levels of taxes. So it’s a modest tax increase on the wealthy.

Third, they’re enacting a financial transaction tax, a tax on every single trade in the financial markets—a very, very modest tax, but that tax can generate a lot of money.

They’re closing loopholes for the fossil fuel industry. Oil, coal, natural gas are still being subsidized while they’re burning up the earth. So we have that going on.

And on top of that, we have a carbon tax, so that every time fossil fuel companies emit carbon into the atmosphere that is causing climate change, they have to pay for doing so. And the money gets rebated back to middle-income and lower-income families.

So that’s how they are able to spend more on meeting social needs and pay for it. The net result is that the deficit actually goes down. So the projection that they have, which I think is a credible projection, is that over time, the deficit will be actually at a lower level as a share of the economy, as a share of GDP than it has been on average over the last 50 years.

WORONCZUK: And this proposal to create more jobs, what kind of jobs will be created?

POLLIN: Well, jobs across the board, because the main way—of course, when you spend money on things like education, health care, infrastructure, you do create jobs. But, of course, when you take money out of people’s pockets in terms of taxes, you reduce jobs. So where does the net stimulus to jobs come from? Basically, it comes from reducing inequality in the economy, because obviously what we see is we’re spending more on meeting basic social needs, health care, food security, family security, education, infrastructure, and essentially we’re taking the money out of the wealthy and Wall Street speculation.

The second way is, precisely, by reducing speculation, we reduce financial crises, we stabilize the economy. And that also will help create jobs.

WORONCZUK: Bob Pollin, thanks so much for joining us.

POLLIN: Thank you very much for having me on.