While Britain's parliament continues to try to figure out if and how to move forward with Brexit, the Labour Party must bring the public debate back to the social terrain to win an upcoming election, says Prof. Leo Panitch.

While Britain's parliament continues to try to figure out if and how to move forward with Brexit, the Labour Party must bring the public debate back to the social terrain to win an upcoming election, says Prof. Leo Panitch. 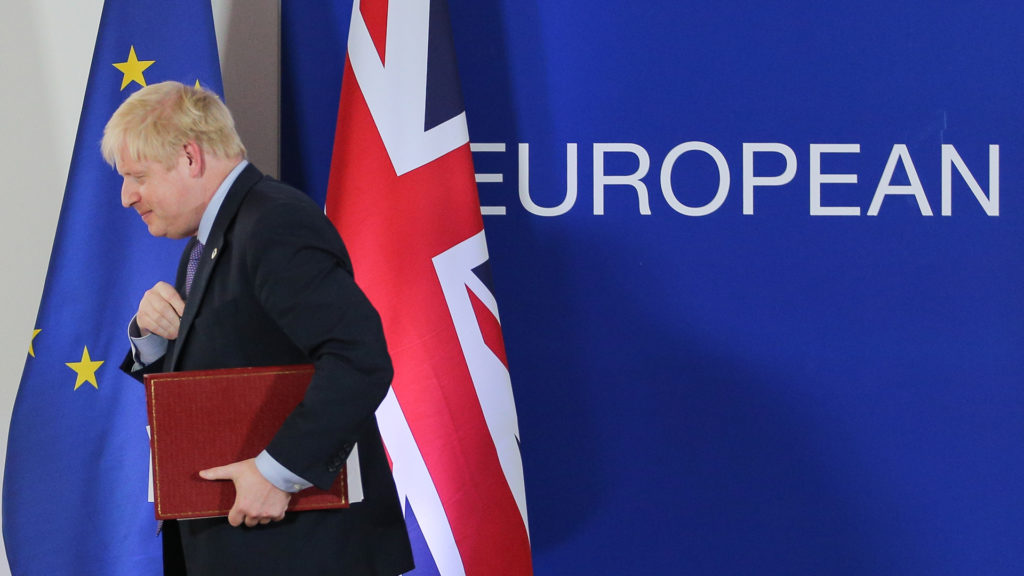 It looks quite possible that Britain will hold a new general election on December 12; at least this is according to a letter that Prime Minister Boris Johnson released on Thursday via Twitter, which he had sent to Labour Party leader Jeremy Corbyn. In the tweet, Johnson says: “I have written to Jeremy Corbyn. This parliament must get Brexit done now, or a new parliament must get Brexit done, so the country can move on.” Parliament had forced Johnson to request a Brexit extension beyond the October 31st deadline last week. However, until recently, Johnson still seemed to hold out hope that the EU would reject this extension. Here’s what he told Parliament on Wednesday.

GREG WILPERT: On Thursday though, Johnson told the BBC that if Parliament “wanted more time to study this excellent Brexit deal, they can have it, but they have to agree to a general election on 12 December.” EU approval of an extension seems imminent now, and so Johnson decided to move forward with the threat of calling for a new general election.

Joining me now to help make sense of the latest twists and turns in Britain’s effort to leave the European Union is Leo Panitch. He’s senior scholar and professor emeritus of political science at York University. Also, he is the author of the book The Socialist Challenge Today: Syriza, Sanders, Corbyn. Thanks for joining us today, Leo.

GREG WILPERT: So let’s start with the latest development. It seems that there will be a new parliamentary election in Britain on December 12. This is not a done deal though, since a two-thirds majority is required for new elections. But according to some estimates, there might be enough Labour votes for such a thing. And if that were to happen, then the motion would actually pass. What do you think will happen? And if so, how does it look for Labour? They’re currently behind in the polls with 25% support, compared to the Conservatives, which according to the latest poll have 35% support.

LEO PANITCH: Well, it has been Labour’s position. It was endorsed at the Labour Party conference that they want a general election rather than another referendum, which a lot of the center right Labour MPs and the liberal Democrats are calling for. So that is their policy. What they have been reluctant to do, however, is to have a general election in the context of the danger that Johnson’s–or indeed, May’s deal before–would go through. So it really now depends on whether they judge that the effect of having this election on December 12 would be for the Johnson deal to be suspended, or indeed, to be attempted to pass through Parliament without sufficient scrutiny or amendment. And that would then lead them, I think, not to support the call for an election this December.

That would, as you indicate, also reflect the current state of the polls. The crucial thing for Labour is to get the social issue–the vast inequality–on the agenda again in Britain, as they did back in 2017 when Corbyn managed to secure the largest increase in Labour vote since 1945. The crucial thing is to be able to get them to shift from a country that is blinded by Brexit but desperately does want this vastly unequal and irrational capitalism at least tamed, if not transformed.

GREG WILPERT: Now, assuming that there is an extension and a new election­–as I said, it’s not clear at all–do you think that Parliament will actually pass the new Brexit deal? And if so, what would that mean for the UK?

LEO PANITCH: No, I don’t think–unless it’s a very secure passage or they reintroduce the same deal–that Parliament will endorse this. The existing balance of forces in Parliament, because Corbyn did so well in the last election, is precisely one that does not allow it to be endorsed. They might pass the deal with amendments. And we’ve seen that Johnson, who doesn’t have any principles whatsoever, as is obvious with what he’s done with Northern Ireland… The Tories, after all, partitioned Northern Ireland a century ago. And now he’s prepared to let that go in order to get his appalling deals through. I can’t see that the existing parliament will endorse this. They might amend it. I think that might even be the preference of many Labour MPs; amend it along the lines of the type of Brexit that the Corbyn-led Labour Party, and the EU even, have been calling for.

GREG WILPERT: What would these amendments include? And would the EU approve them, even? Because wouldn’t it have to go back to the EU then?

LEO PANITCH: The EU would much prefer… Well, that’s a good question. But the EU would much prefer what Labour’s position has been. And the EU has indicated to Corbyn that they preferred it way back when the crisis was going on last March. Labour’s position has been that they want the closest possible relationship with the EU. And that would include the existing customs union; the existing system, in other words, of tariffs and regulations, together with the closest possible approximation to the single market–which has to do with services, et cetera–so long as it allowed some room for maneuvering for a British government around capital movements and the movement of labor. And the movement of capital is, above all, the most important thing. The inability of a country to control the flow of capital in and out of the country means that it can’t control the patterns of investment in the country. And that is why this is so crucially important.

Of course, this is very different than what Johnson wants out of this and what his shadow cabinet wants out of it. They have, for years… The people who occupy the key positions in it–including the Chancellor or the Exchequer now, the Finance Minister–what they have always indicated, what they all want of it, is a removal of labor protections and a cheapening of labor in general in Britain so the UK can be Singapore in the North Sea.

GREG WILPERT: Now, during a question and answer period on Wednesday in Parliament, Corbyn responded to some of the things that Johnson had said about the new Brexit deal. Let’s just play this clip.

JEREMY CORBYN: The Prime Minister unlawfully prorogued Parliament. He said he would refuse to comply with the law. He threw Northern Ireland under a bus and tried to prevent genuine democratic scrutiny and debate. He once said, “The whole withdrawal bill, as signed by the previous Prime Minister, is a terrible treaty.” And yet, this deal is even worse than that. Even if he’s not that familiar with it, does the Prime Minister accept that Parliament should have the necessary time to improve on this worse-than-terrible treaty?

GREG WILPERT: Now, just as a Corbyn is outlining there, it seemed for a while that Johnson has been committing a number of tactical mistakes that really should have had an impact on his ability to govern and his popularity. But as I mentioned earlier, he’s still ahead in the polls. And he seems to be getting what he wanted after all. At least it’s possible, in any case, although it’s not guaranteed. So the question is: what can Labour actually do at this point to salvage the situation? You outlined some of those points earlier. I just want you to go into a little bit more detail as to how they can turn the situation around.

LEO PANITCH: That clip captures a lot, and so did your earlier one of Johnson. Johnson, like Trump, has a certain knack of speaking like the guy in the bar or in the tavern. And that, of course, has a great deal of appeal, especially to a certain stratum of male voters; male working-class voters. Jeremy is very good at speaking to them as well, on the stump. But he meets them in their own milieu when he speaks at rallies, and he does so effectively. When he’s standing there, as you could see, in the House of Parliament… Because he’s never primarily been someone who has seen himself as having a Parliamentarist career. He’s been a campaigner, he’s been an organizer, he’s been a socialist educator. So for the most part, you see him there reading carefully the script that’s been prepared, whereas Johnson is blustering away without looking down. And so, that is what’s captured by the media and on television.

When an actual election happens, things are very different. Corbyn is not visible in these little snippets on the BBC, in parliamentary behavior. He is seen then on an equal basis, actually, in his milieu. And he was extremely good in the debates and extremely good on the stump in the previous election campaign. So in that context, things will certainly change. One has to remember that back in 2017, he wasn’t 12% behind in the polls; Labour wasn’t 12% behind in the polls.

GREG WILPERT: Of course, we’re going to continue to follow this situation, but we’re going to have to leave it there for now. I was speaking to Leo Panitch, professor emeritus of political science at York University. Thanks again, Leo, for having joined us today.

LEO PANITCH: Good to talk to you, Greg.