Bolton Mobilizes the Coalition of the Willing – This Time for Syria

John Bolton warns of joint action in Syria, calling on the UK and France to join. Talk of regime change. The excuse: weapons of mass destruction. Sounds familiar?

John Bolton warns of joint action in Syria, calling on the UK and France to join. Talk of regime change. The excuse: weapons of mass destruction. Sounds familiar? 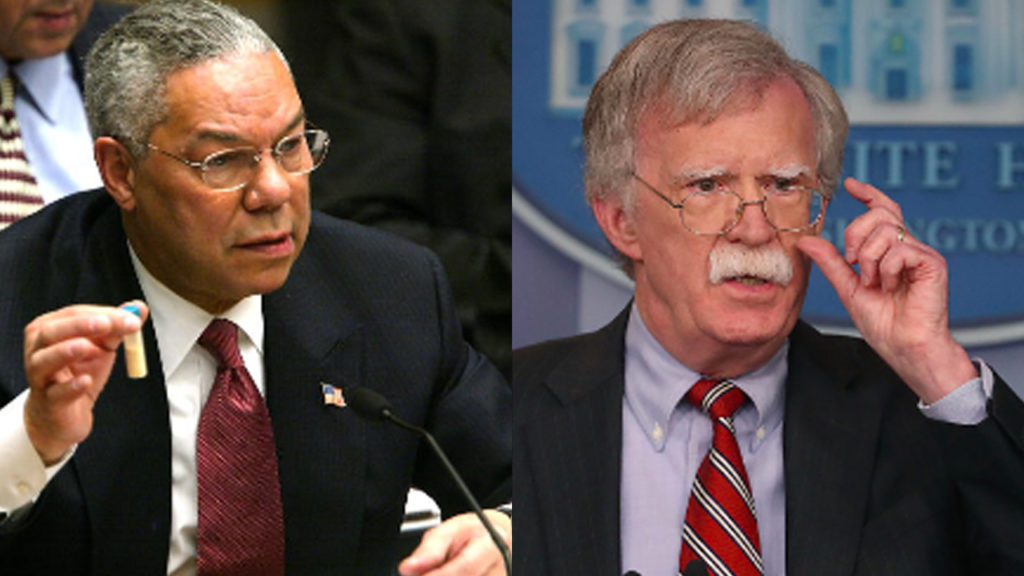 GREG WILPERT: Is another war looming for the U.S. in the near future, this time in Syria? John Bolton, Trump’s national security adviser, gave a press conference last Monday.

JOHN BOLTON: The use of a weapon of mass destruction that the Trump administration found unacceptable. We’ve tried to convey the message in recent days that if there’s a third use of chemical weapons the response will be much stronger. And I can say we’ve been in consultation with the British and the French who joined us in the second strike, and they also agree.

GREG WILPERT: The Russian air force has bombed the city of Idlib while accusing the U.S. of arming rebel groups with chemical weapons, possibly in order to justify military intervention. Former Chief of Staff to Colin Powell Colonel Lawrence Wilkerson had this to say.

LARRY WILKERSON: I think what we’re seeing here is a resurrection, if you will, of the neoconservative agenda. Syria was to be next. Iran after that. Following Iraq, of course, the invasion in 2003 which went so haywire that they were unable to follow up quickly with Syria.

GREG WILPERT: Bolton’s language is reminiscent of the Project for a New American Century, a neoconservative think tank whose founders include Dick Cheney, Donald Rumsfeld, and Paul Wolfowitz.

DONALD RUMSFELD: We have what we consider to be credible evidence that al Qaeda leaders have sought contacts in Iraq who could help them acquire weapons of weapons of mass destruction capabilities.

GREG WILPERT: Just as prior to the invasion of Iraq in 2003, the U.S. is gathering allies. The UK and France, according to Bolton, are already on board. British Prime Minister Theresa May already approved airstrikes in Syria in April.

THERESA MAY: I have authorized British armed forces to conduct coordinated and targeted strikes to degrade the Syrian regime’s chemical weapons capability and deter their use. We are acting together with our American and French allies. We have sought to use every possible diplomatic channel to achieve this, but our efforts have been repeatedly thwarted. Even this week, the Russians vetoed a resolution at the UN Security Council which would have established an independent investigation into the Duma attack.

GREG WILPERT: Since the Second Gulf War, France has become more militarized and engaged in military strikes in Mali and in Syria.

AKRAM BELKAID: The French position till now is that French might bomb Syria if Syria uses chemical weapons against the rebels in Idlib. But it’s not- they are not talking about any action decided yet. For the French administration the red line is if Mr. Assad’s army uses chemical weapons. That’s all.

In the French administration we have many people that are still holding some grudge against the American administration because of what has happened in 2013, where Barack Obama decided not to bomb Syria. And this is a story which is regularly printed here in France accusing the U.S. not having done the job in 2013.

GREG WILPERT: The German parliament, the Bundestag, is split over the question whether to join the assault on Syria. As of now, the dominant voices in the German political system argue that such an intervention would be unconstitutional without a UN mandate. And such a mandate is unlikely, given that Russia could veto it in the Security Council. As the Mueller investigation against Trump tightens, his administration needs weapons of mass distraction, and nothing distracts the media more than war.