Bolivian President Evo Morales stated that he was expelling US ambassador Philip Goldberg for allegedly inciting violent opposition protests. The Bolivian leader did not offer specific evidence against Goldberg, but he has long accused the diplomat of conspiring with Bolivia's conservative opposition. Meanwhile anti-Morales protests reached a crescendo this week ,with the sacking and burning of government offices in Santa Cruz . Morales' opponents in the east are seeking a greater share of revenues from natural gas, as well as regional autonomy.

Bolivian President Evo Morales stated that he was expelling US ambassador Philip Goldberg for allegedly inciting violent opposition protests. The Bolivian leader did not offer specific evidence against Goldberg, but he has long accused the diplomat of conspiring with Bolivia's conservative opposition. Meanwhile anti-Morales protests reached a crescendo this week ,with the sacking and burning of government offices in Santa Cruz . Morales' opponents in the east are seeking a greater share of revenues from natural gas, as well as regional autonomy. 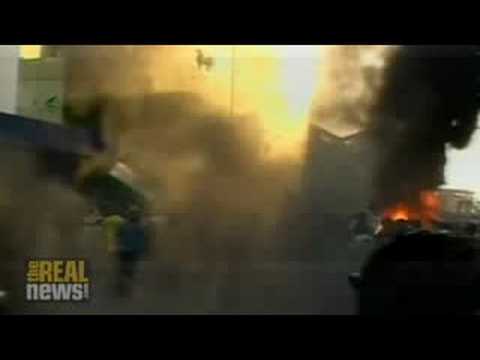 EVO MORALES, BOLIVIAN PRESIDENT (SUBTITLED TRANSLATION): I ask our foreign minister that, following the legal and diplomatic guidelines he send a letter to the (US) ambassador today letting him know of the national government’s and the president’s decision that he urgently return to his country. We do not want separatist, divisionist people that conspire against unity. We do not want people that attack democracy.

NKWETA: Morales’s announcement came hours after a pipeline blast triggered by saboteurs forced the country to cut national gas exports to Brazil. The Bolivian leader did not offer specific evidence against Goldberg, but he has long accused the diplomat of conspiring with Bolivia’s conservative opposition.

FORREST HYLTON, JOURNALIST AND AUTHOR: It’s extremely important. And in terms of Bolivia’s international relations, in particular the United States, it will have enormous repercussions. It’s likely it’ll play very well domestically. Internationally, they don’t really have a lot of hard evidence to prove that the ambassador was plotting a coup, although common sense would indicate that he was clearly coordinating with opposition politicians in the run-up to the latest events. Nevertheless, I think the important thing for the Morales government to do is to deal with the people who are running things on the ground in Santa Cruz and other lowland departments, rather than focusing on the US ambassador as the target of government anger. So in a way it’s sort of an easy way to blow off steam with Morales’s base without actually confronting the people who have really escalated their assault on the central government in power in the last few days.

NKWETA: Anti-Morales protests reached a crescendo this week, with the sacking and burning of government offices in Santa Cruz.

HYLTON: The departmental prefects and the civic committees that back them, along with their kind of shock troops, the youth wing of the right-wing reaction, they have begun to try to implement their own control in their regions through violence by installing departmental police, departmental tax collectors. So they are implementing the agenda that they approved without legal sanctions back in June. And Morales’ victory was so overwhelming that in a way he forced them to up the ante if they were going to continue to contest his government, because he won 67 percent and increased his vote by 13 percent over 2005, and above all he made his biggest gains in the heartland of the right-wing-reactionary territory.

NKWETA: While Morales’s opponents continue to destabilize the government, experts say there still may be room for negotiation.

HYLTON: Sometimes when it appears that things have already gone overboard in Bolivia, at least there’s still the possibility that there will be negotiation or a discussion or something of that nature. In this case, I would not bet my money on negotiation. It appears that confrontation is inevitable. The issue of whether Morales can make concessions that would be sufficient for the Media Luna without betraying the demand that brought him to power on the back of popular insurrection is essentially the basic dilemma that the Morales government has faced since it entered office, and it has so far been unable to resolve that question. The strategy has been to give as many concessions as seem required for purposes of political expediency in any given moment, such as the design of the constitutional assembly. In the medium term, these kinds of concessions proved to be disastrous for the government that made them in the first place, and yet the strategy continues to be concession after concession, although we may have reached a boiling point in that respect. It’s not clear how the government can give any concessions in the face of this sort of secessionist crisis, because that’s what we’re dealing with. It’s not clear how the government could accede to secessionist demands without fundamentally betraying everything that it purports to stand for. So the question then becomes: well, what is going to be the government response? And that’s a question for which there is as yet no answer.