US spy scandal in Bolivia 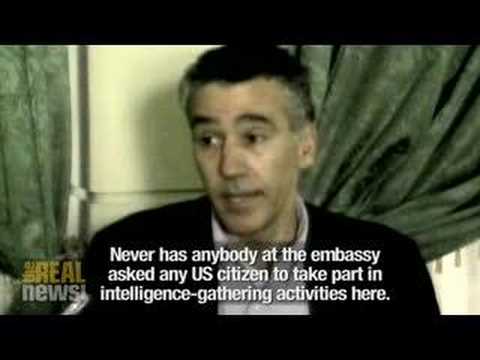 ZAA NKWETA, PRESENTER: A United States embassy official in Bolivia, Vincent Cooper, has been recalled to Washington after having asked a US Fulbright scholar to gather information on foreign nationals in that country.

JOHN ALEXANDER VAN SCHAICK, FULBRIGHT SCHOLAR: The shocking part was when he asked me that if I should encounter any Venezuelans or Cubans while I’m in the field, doctors, field workers, that I should report to the embassy with their names and sort of like—I don’t remember his exact wording—where they’re at, the location. And then he said, “We know they’re out there. We just want to keep tabs on them.” I was shocked, and also I didn’t want to confront him about this directly, because, I mean, this man’s asking me to spy for the US government, and I didn’t really feel comfortable, you know, saying, “Hey, wait a minute—” to him. And also I felt like this might be happening to more people.

According to ABC News, Cooper had made similar requests to 30 Peace Corps volunteers in July of last year. The Peace Corps said in a statement that [text on screen] “… by law, volunteers cannot be asked to gather intelligence for the US government.” The US State Department has said that such a request was against US policy but did not deny the accusation. The US embassy in Bolivia was keen to distance itself.

PHILIP S. GOLDBERG, US AMBASSADOR TO BOLIVIA (SUBTITLED TRANSLATION): Never has anybody at the embassy asked any US citizen to take part in intelligence-gathering activities here. But I want to say that I’m deeply sorry over this incident which has become public the past weekend. We absolutely respect the sovereignty and the dignity of Bolivia. We respect that and I’m willing to talk to government officials to make everything clear.

Bolivian President Evo Morales said that Vincent Cooper was an undesirable person, but has not yet sought his expulsion.

EVO MORALES, BOLIVIAN PRESIDENT (SUBTITLED TRANSLATION): From the moment that Vincent Cooper, aide to the chief of security of the US embassy, acknowledged that they had used some US citizens as spies, well, I feel that man had not only violated the rights of US citizens but also violated and offended Bolivia as a nation.

VAN SCHAICK: We’re not trying to do anything to interfere with what the Bolivian government’s doing. That’s not what we’re here for. We’re here actually to keep the relationship between the people, the actual people of the United States and the people of Bolivia, in a positive way.