Bolivians Protest US Attack On Syria 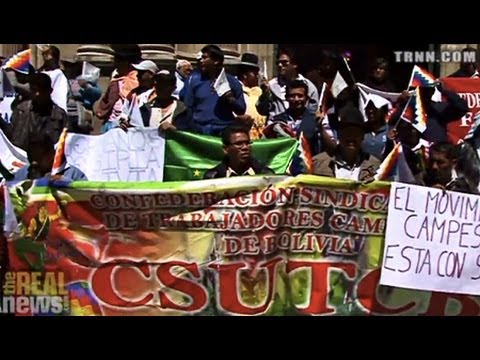 CONCEPCION ORTIZ, VICE PRESIDENT, MAS (SUBTITLED TRANSL.): Bolivians must unite to morally support Syria and call upon the United States to reflect: how is it possible that a president who has received the Nobel Peace Prize is now inciting war?

JAIME VERA COPA, PRESIDENTE, FEJUVE LA PAZ (SUBTITLED TRANSL.): Enough invasion, enough of the aggression against a people who in this moment need peace. This is why as Bolivians we support the integrity and sovereignty of the Syrian people. This is why Bolivia will always call for peace. Enough of Obama continuously attacking and pressuring countries all over the world.

DOUGHERTY: Several days earlier, protestors had gathered in front of the United States embassy in La Paz to protest President Obama’s calls for a military strike against Syrian President Bashar al-Assad’s forces due to their alleged use of chemical weapons against civilians. President Evo Morales returned from a tour through Europe, where he met with a number of leaders, including Pope Francis in the Vatican, who also called for peace in Syria. Earlier in the week, President Morales roundly rejected what the United States has maintained are purely humanitarian grounds for military intervention.

PLACARD (SUBTITLED TRANSL.): Everyone with Syria. Death to imperialism.

EVO MORALES, BOLIVIAN PRESIDENT (SUBTITLED TRANSL.): They later justify intervention with the pretext or discourse of it being a humanitarian matter. At the bottom of it all, there is no humanitarian plan. What really interests them is oil and geopolitical control in the Middle East.

DOUGHERTY: Bolivia, along with several other left-leaning governments in Latin America, has maintained friendly ties with Syria in recent years. The regional South American bloc UNASUR released a declaration the previous week condemning a possible U.S. military attack on Syria.

Reporting from La Paz, Bolivia, this is David Dougherty with The Real News Network.