The ongoing conflict in Bolivia saw at least 30 people killed on the weekend, as the opposition clashed with government forces. The opposition headed by wealthy landowners have vowed to make Bolivia ungovernable. Martial law was declared on Saturday in the province of Pando. Vice President Alvaro Garcia held meetings with the opposition in La Paz, whilst President Morales is attending an emergency UNASUR (Union of South American Nations) summit in Chile.

The ongoing conflict in Bolivia saw at least 30 people killed on the weekend, as the opposition clashed with government forces. The opposition headed by wealthy landowners have vowed to make Bolivia ungovernable. Martial law was declared on Saturday in the province of Pando. Vice President Alvaro Garcia held meetings with the opposition in La Paz, whilst President Morales is attending an emergency UNASUR (Union of South American Nations) summit in Chile. 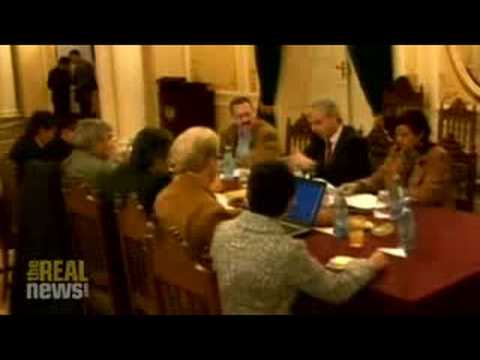 ZAA NKWETA: Violent conflict in Bolivia pitted autonomous opposition forces against President Evo Morales’s government over the weekend. At least 30 people were killed in Pando province, which was put under martial law on Saturday.

WALKER SAN MIGUEL, BOLIVIAN DEFENSE MINISTER (SUBTITLED TRANSLATION): Having the approval of the council of ministers and following Article 111 of the state’s political constitution, all the territory of the Pando state is declared under state of siege.

NKWETA: Negotiations between the government and the autonomous right began on Monday, with both sides agreeing to wait until President Evo Morales returned from Chile, where he’s attending a South American leaders’ summit on the Bolivian crisis.

EVO MORALES, BOLIVIAN PRESIDENT (SUBTITLED TRANSLATION): I come here after the call of the temporary president Michelle Bachelet and explain to the presidents of Latin America about a civic coup in some states of Bolivia.

FORREST HYLTON, JOURNALIST AND AUTHOR: The autonomists are against any equitable redistribution of land and natural resources, particularly gas. And almost all of Bolivia’s gas reserves are located in the department of Santa Cruz, in Tarija. And so the autonomists are really intent on holding onto the profits from those gas reserves for themselves. And the central government of course demands its right to share, and it’s trying to redistribute those resources more equitably among the different departments, so that the departments with the reserves, which are the richest departments in terms of per capita income, don’t manage to hold onto all the wealth, because in the past, these departments have received a disproportionate amount of central-government subsidies, and this is the first time that a central government has tried to address the historic injustice between the distribution of resources among east and west within the country. So that’s what’s really generating the unrest in the east, the attempts on the part of Evo Morales to give some justice to the departments in the west that have long been starved of resources and revenue. It appears that the opposition, at the very least in Beni, Santa Cruz, and Tarija, the three departments that are not under martial law but which are part of the opposition movement, have pulled back temporarily, and have begun to negotiate with Vice President Álvaro Garcia Linera regarding some of their demands for autonomy. As far as martial law in Pando goes, it’s not clear how effective it is as yet or is going to be. The prefect who organized Thursday’s massacre, Leopoldo Fernández, is still at large and is hard at work making a mockery of government pretensions to impose the rule of law throughout the territory. So it’s not clear how many people have been killed—at least 30, it appears, a couple of hundred injured, and perhaps as many as 40 disappeared. So this is the worst massacre in Bolivia since October 2003, and Morales is really going to have to demonstrate his ability to check the reactionary rampage in the lowlands if he’s going to hold onto legitimacy with his base within Bolivia. On the other hand, internationally [inaudible] has received extremely strong support, particularly from Brazil and Argentina, which receive the bulk of Bolivian gas. So that’s a very important difference between now and the past, when right-wing movements within Bolivia always counted on the support of a military dictatorship in neighboring countries. Today the situation is dramatically different. UNASUR was formed four months ago as a union of South American republics, and it’s one more group within the region overwhelmingly in favor of Evo Morales. And even the right-wing government of Felipe Calderón in Mexico has pronounced in favor of the democratically elected and legitimate government of Evo Morales as opposed to the secessionists. So these interstate organizations are playing a more and more important role in regional diplomacy, and the United States has really been shut out of the picture as South American countries in this case try to resolve the crisis by themselves, without the interference of the United States. So this is very important. In the past, the United States really had a choke hold over diplomacy in the Western Hemisphere, and now what you’re seeing is the emergence of countries like Chile and Brazil and Argentina, as well as Venezuela, as major players in regional diplomacy. So there’s really a shift away from the United States and an attempt to resolve problems in a more autonomous fashion.