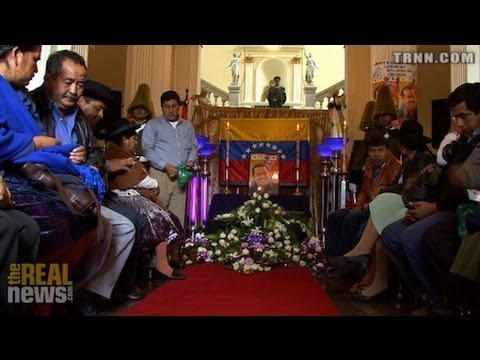 Bolivia and Venezuela have maintained strong ties since Bolivia’s leftwing leader, Evo Morales, first assumed the presidency in 2006. A vigil was established in the national Congress in La Paz, the seat of Bolivia’s government. Leonidas Zurita Vargas is the secretary of international relations for MAS, the Movement for Socialism, Bolivia’s governing political party.

LEONIDAS ZURITA VARGAS, SECRETARY OF INTERNATIONAL RELATIONS, MAS (SUBTITLED TRANSL.): Today we cry, but tomorrow we will work and we will fight. This is the best message and tribute that we can give to our Comandante Chavez, because he worked and fought against the empire, against the colonial, and against capitalism, and today in the way that Latin America has brought about the integration of nations, defending the rights of the people. Today more than ever this is the best way to unite ourselves in order to continue contributing and to continue working.

DOUGHERTY: Questions have arisen over the potential impacts of Chavez’s passing on Bolivian-Venezuelan relations. Former MAS deputy and Majority Leader Gustavo Torrico says Bolivia’s relationship with Venezuela is about more than just Chavez and Evo, and doesn’t anticipate any major changes.

GUSTAVO TORRICO LANDA, EX-MAJORITY PARTY LEADER, MAS (SUBTITLED TRANSL.): I don’t think we are going to undergo any changes, because it’s not about provisional or transitory agreements between individual people; it’s about agreements and the construction of political processes among peoples, of general ideas that are constructed by social movements of the recuperation of natural wealth, the idea of producing for one’s own consumption, of recuperating our national resources from the hands of transnationals. It’s not the individual, it’s the political act that Hugo constructed. And that has continued in time with Correa, with Evo, with Dima Rousseff, with a number of people in the world.

DOUGHERTY: As members of the regional bloc ALBA, the Bolivarian Alliance for the Peoples of Our America, Venezuela and Bolivia have engaged in a number of both economic and cultural exchanges. A group of Bolivian students who studied at universities in Venezuela and other ALBA-member countries as part of a program of international cooperation organized an event honoring Chavez at the Simon Bolivar monument in the center of La Paz.

Political Scientist Doroteo Vargas studied in Venezuela as part of the agreement and attended the event.

DOROTEO VARAGS, POLITICAL SCIENTIST (SUBTITLED TRANSL.): Today we are sad, we are in mourning, because our Comandante has passed away. But the ideas, the ideals, the conviction, and the political vision that he left behind have remained planted in the world. Not only in Bolivia, and not only in Venezuela, but in the whole world there are activists who are going to take on the responsibility, myself included, to follow the footsteps of Comandante Chavez.

DOUGHERTY: President Evo Morales traveled to Caracas, Venezuela along with 100 other representatives of Bolivia to attend Hugo Chavez’s funeral.