Legislation seeks to combat high levels of violence against women

Legislation seeks to combat high levels of violence against women 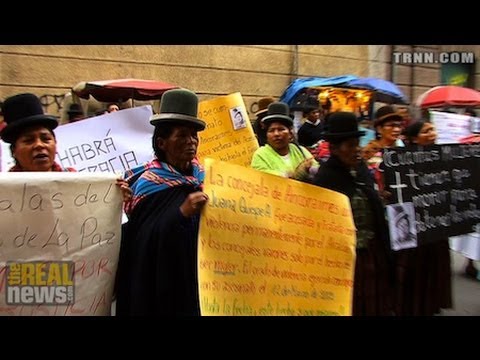 DAVID DOUGHERTY, PRODUCER, TRNN: In La Paz, Bolivia, community members and loved ones of Juana Quispe gather for a vigil, followed by a march on the prosecutor’’s office demanding justice and an end to violence against women. It’s been a year since Quispe was murdered, and like the majority of similar cases, nobody has been held responsible for her death.

The Plurinational State of Bolivia has passed a new law aiming to address soaring levels of violence against women in the South American country. The new “Comprehensive Law to Guarantee Women a Life Free of Violence” was signed into effect by President Evo Morales on Saturday, March 9.

Teofila Guarachi Cusi is the ombudswoman of the La Paz department. She says the new law is multifaceted and will impact areas of education, health, and most importantly judicial proceedings.

TEOFILA GUARACHI CUSI, OMBUDSWOMAN, LA PAZ DEPARTMENT (SUBTITLED TRANSL.): The document touches upon a number of themes, including working in the areas of prevention, prosecution, sanctions, and of course restitution. Prevention means working with the Ministry of Education so that the educational curriculum can include the subject of gender equity and the subject of women’s human rights…. The law also in a way allows the creation of specialized courts, authorities that will be trained in areas of gender, violence, human rights, and that this be applied in order to prevent cases from remaining in impunity.

DOUGHERTY: Bolivia’s rates of femicide and violence against women are among the highest in Latin America, and like a number of countries around the world, they have steadily risen over the past decade. Since the start of 2013, more than 30 women have been murdered in Bolivia. A recent high-profile case in February where journalist Hanali Huaycho was stabbed to death by her husband sparked public outcry and pressured legislatures to move forward in passing the law that was introduced in Congress more than three years ago.

A number of women’s organizations and social movement participated in drafting the legislation, which establishes judicial and sentencing codes that distinguish between femicide and other forms of homicide. Mary Marca is the executive director of CIDEM, the Center for Women’s Information and Development, a women’s organization that has done extensive work on issues of gender violence and participated in drafting the new law.

MARY MARCA, EXECUTIVE DIRECTOR, CIDEM (SUBTITLED TRANSL.): It’’s an important regulation, an important advance that as women activists and institutions and organizations we have been elaborating for the past ten years. Practically every word and every letter in the law contains a story of violations against women. However, we also want to say that if this law does not have sufficient resources, if the law is not properly applied with organizational hierarchy and resources and political courage, it’’s going to have problems.

DOUGHERTY: The government of President Evo Morales and the new political constitution approved in 2009 have made a number of efforts to address gender inequality in Bolivia. Fifty percent of President Morales’s cabinet is comprised of women, and Bolivia is currently one of the only countries in the world to have both houses of Congress headed by women. The government, led by MAS, the Movement Towards Socialism, has created an office of depatriarchalization in tow with its general discourse of decolonization. Rodolfo Calle Inca is a representative for MAS from the La Paz department who says the new law is part of the government’s broader initiatives to dismantle patriarchy.

RODOLFO CALLE INCA, MAS REPRESENTATIVE, DEPARTMENT OF LA PAZ (SUBTITLED TRANSL.): Throughout the world it has been believed that the man is the owner of the woman. The man has treated the woman as if she were private property, giving rise to patriarchy. We want to struggle against this and we want for there to be equality, as established in our constitution, as well as in treaties in international law.

DOUGHERTY: Many women’s groups in Bolivia say the government still has a long way to go to ensure the full protection of women’s rights, and that rhetoric has not always translated into concrete achievements. For Bolivian sociologist and feminist Ximena Machicao, the new law is an important advance, but is limited in its capacity to address what she says is a structural problem that is still widely socially accepted in Bolivia.

XIMENA MACHICAO, BOLIVIAN FEMINIST, SOCIOLOGIST (SUBTITLED TRANSL.): Violence against women is still viewed as natural. It is seen as normal. It is socially legitimized. And in my point of view, the laws contribute to closing gaps and ending certain types of impunity, but this is not sufficient as long as there is not a change in beliefs, in habits and customs and attitudes in society as a whole.

DOUGHERTY: The United Nations has praised Bolivia for its passage of the new law against violence towards women. For women’s groups in Bolivia, it remains to be seen whether the state will guarantee the successful implementation of the law as they continue their struggle against femicide and all forms of gender violence.

Reporting from La Paz, Bolivia, this is David Dougherty with The Real News Network.