The footage, which shows an officer placing evidence in a vacant lot and then activating his camera to retrieve it, has embroiled the Baltimore Police Department in yet another scandal

The footage, which shows an officer placing evidence in a vacant lot and then activating his camera to retrieve it, has embroiled the Baltimore Police Department in yet another scandal 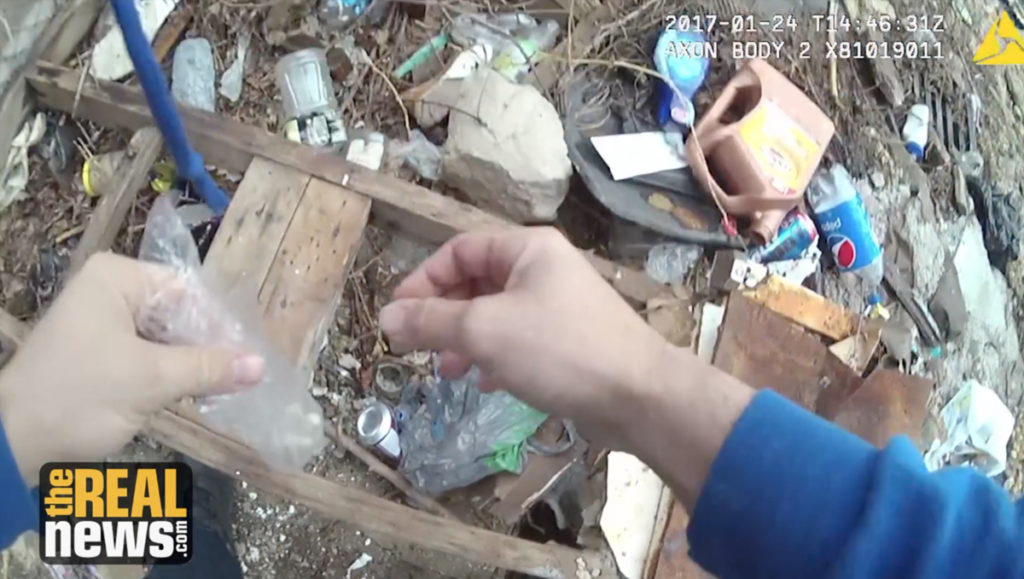 STEPHEN JANIS: It was footage from the body worn camera of a Baltimore police officer that made national headlines. Plainclothes Officer Richard A. Pinheiro, Jr. places drugs under a soda can. He then returns to the street to activate his body camera unaware that the device is programmed to roll back 30 seconds.

DEBORAH LEVI: As you can see, when a body camera is activated it sort of bounces back 30 seconds without audio.

DEBORAH LEVI: It then picks up the officers on the sidewalk saying they’re going to go look in that same space where it appears he may have placed in the can. And then you can hear his two colleagues laughing. And then the officer walks down the alley, digs through the trash where the red can appears to have just been placed and he retrieves it.

STEPHEN JANIS: Pinheiro then stages his discovery of drugs, which led to charges against an innocent suspect that were eventually dropped. The footage prompted outrage from the public defender’s office —

DEBORAH LEVI: The following week, the state’s attorney’s office prosecuted another case with Officer Pinheiro where no disclosure was made about the video to the defense attorney and nothing had been done.

KEVIN DAVIS: When those gaps in video footage exist, it’s ugly. You know? What was there? I don’t know. I didn’t see it. The camera was on, now it’s off. So does that mean that when the camera was off some type of criminal misconduct was taken place by police officers? I think that’s a conclusion that we just can’t jump to because the camera is off.

STEPHEN JANIS: And today Baltimore City State’s Attorney Marilyn Mosby announcing indictments against Pinheiro. According to a written statement released by her office, a grand jury returned two charges against him. One count of tampering with or fabricating physical evidence, and one count of misconduct in office.

Before this other controversial body cam video where evidence tampering was alleged, prosecutors declined to charge. The charges come one day after prosecutors showed a cellphone video during the trial of two officers in the scandal plagued Gun Trace Task Force, a video they faked in order to cover up the theft of $100,000. An ongoing series of scandals that continue to weigh down a department with no end in sight.

This is Stephen Janis reporting for The Real News Network in Baltimore City, Maryland.