Ben Norton of Salon.com says the Democratic Party undermined the Sanders' campaign as is known from Wikileaks and the media gave Trump two billion dollars of free media coverage

Ben Norton of Salon.com says the Democratic Party undermined the Sanders' campaign as is known from Wikileaks and the media gave Trump two billion dollars of free media coverage 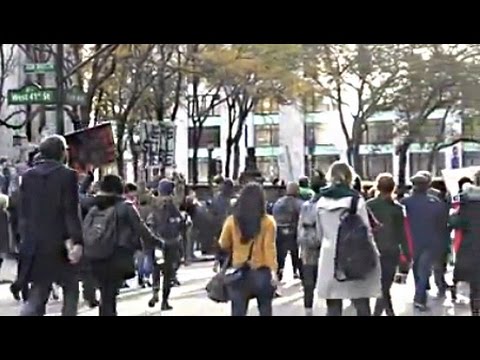 SPEAKER: Trump being elected is devastating. It’s devastating or immigrants, for people of color, for women. As a mother with two girls, it feels very personal to me.

SPEAKER: It’s very reassuring to see that the resistance is already beginning. The question is, why did Donald Trump win? Why did the least popular presidential candidate in US history win? The reason for that is that Hillary Clinton was the second popular presidential candidate in US history and because the DNC, we now know thanks to WikiLeaks, systematically sabotaged Bernie Sanders’ campaign. We know Bernie Sanders himself stressed throughout the primaries that he had a much better chance of beating Donald Trump. In fact, polls showed consistently that he had a double digit margin over Trump whereas Hillary Clinton had an average of about 3 %. We saw what happened. There was very low voter turnout because it’s very hard for people to get behind the democratic party that for years has catered to large corporate interests, to Wall Street, has continued in mass deportations, has continued through all of these wars in the Middle East. There are 7 million fewer democrats who voted in this presidential election than who voted in 2012.

The fault of this is not just on the extreme republicans who have lurked far to the right. It’s also on the democratic party of refusing to serve the people that are purported to represent. For refusing to stand up for left wing progressive policies and for destroying the only chance they had to defeat Trump. Of course the media plays a large role in this as well.

The corporate media profited very greatly off of Donald Trump’s campaign. Leslie Moonves, the CEO of CBS, was one of the most highly paid corporate executives on the planet, bragged that while Trump’s campaign was bad for the US it was great for CBS. They made millions and millions of dollars. In fact we now know the NY Times calculated that Donald Trump was given more than 2 billion dollars of free media coverage and free advertisements thanks to this media but at the same time largely ignored Bernie Sanders who again could’ve easily beaten Donald Trump.

So not only did the DNC, we know from WikiLeaks, systematically undermine Bernie Sanders, the media itself undermined and ignored his campaign and helped bring us into the situation we’re in right now.

It’s very clear that the media is normalizing what is happening but not just the media, the democratic party. President Obama came out and said that he hopes for success of Donald Trump and his administration. I think is absolutely a wrong handed approach. Instead we should be pressuring the Trump administration. This is not normal and we should not normalize it. We should not white wash it. We should be clear from the beginning that the person in the White House, the presidential administration is far right, is bigoted, is xenophobic, is islamophobic. We should not in the media white wash it and normalize it. We should make it very clear that the government is being run by far right extremists because the only way that they’re ever going to be defeated, the only way that in 4 years we’re going to be able to take back and have an actual progressive left wing movement is by constantly pressuring the government and not allowing the media and the democratic party to normalize what is happening.

It’s also very important to recognize that Hillary Clinton lost in states that Bernie Sanders won in the primary. Namely Michigan and Wisconsin. Those are two very important states. They are battle ground states that helped Donald Trump win the presidency and in the democratic primaries, Bernie Sanders won both of those states pretty cleanly. That’s largely because of his policies. It’s because in Wisconsin, 50% of people in unions voted for Donald Trump. Not because they support his far-right bigotry but because Donald Trump opposed the Transpacific Partnership and his neoliberal trade agreements that the Clintons and the democratic party under the neoliberal new democrat have pushed.

Hillary Clinton not only supported NAFTA under President Bill Clinton and strongly lobbied for it, she has also consistently for years support Trans Pacific Partnership, the TPP. A global neoliberal trade agreement that was written by large multinational corporations and would lead to massive job loss in the US, outsourcing environmental destruction. So it’s important to understand that Bernie Sanders could have won these critical states that Hillary Clinton lost. He did win them in the primary because of his progressive economic policies and he would’ve won them in the general election as well.

We need to be very serious about looking at the Trump administration. Not just Trump as himself. I mean Trump is already an extreme far right bigot. But his cabinet is going to be chalk full of fellow extremists including Giuliani, the architect of the stop and frisk program here in New York that was found by a court to be unconstitutional and a form of racial discrimination. It’s very important that people understand that Trump is going to fil the government with people who are in some ways even further to the right of him and it’s very important that we have grassroots progressive movements that pressure not just the White House but pressure all elements of our government because our government from the Department of Defense to the Secretary of the State. Or from the Department of Defense to the State Department to the Department of Justice is going to be full of a lot of extreme bigots and the only way that we’re going to be able to push back against them and fight for progressive causes is by coming out of the streets like these protestors here and demanding progressive change in pushing the democratic party. Because the democratic party is one of the main reasons we’re in this situation.

SPEAKER: It’s very clear that we’re seeing a resurgence of a kind of neo-McCarthyism. But the irony is the original McCarthyism actually targeted actually existing communist movements. Today Russia has not been socialist for 25 years now but still there’s this kind of red baiting going on. There’s this notion that for some reason Russia is this evil boogieman and that they’re infiltrating the US government. It’s absolutely absurd. It’s an abstraction from what’s actually happening inside the US. It’s a distraction from domestic problems.

He’s using the xenophobia to build up support. He’s opposing Muslim immigrants. He’s opposing undocumented immigrants. But the irony is that the democratic party in its own ways is using its own kind of xenophobia instead of appealing to base islamophobia and anti-Latino racism. Instead they’re using this kind of knee jerk Russiaphobia that we have from the Cold War. They’re blaming all of their own problems internally on this foreign boogie man, instead of looking seriously at the internal contradictions within US society instead of dealing with the problems we are all facing as Americans.

SPEAKER: Even though I don’t exactly like being at this march, I know it’s really important for the world.

SPEAKER: I brought my daughter out here because I think right now we need to be taking leadership from the communities that are on the frontlines and I think we just need to start resisting from day 1.

SPEAKER: He believes we need to liberate all the fossil fuels trapped in the ground and let them do their purpose as engines of economic growth without thinking what that does to the climate, the air, and the water, and without caring. So I’m really, really scared about that. I think in another way there’s a lot of opportunities for people to come together and create the world we want to see. That’s honestly never seemed that realistic to me before because there haven’t been that many people on the same page but right now there is, including state governments and local governments. People in places of power who do not agree with Donald Trump. And I hope we can all support each other and get past our previous differences. Some of us were Bernie, some of us were Hillary, some of us were Jill Stein. Right now we all need to be on the side of planet earth and justice.