Blue Flu Epidemic Caused by Shutdown: Will it Turn into a Strike?

The shutdown is causing a so-called "blue flu" epidemic among TSA employees who are suffering economic distress. What can they do? We speak to labor organizer Gary Stevenson, co-author of a New York Times OpEd on the topic

The shutdown is causing a so-called "blue flu" epidemic among TSA employees who are suffering economic distress. What can they do? We speak to labor organizer Gary Stevenson, co-author of a New York Times OpEd on the topic 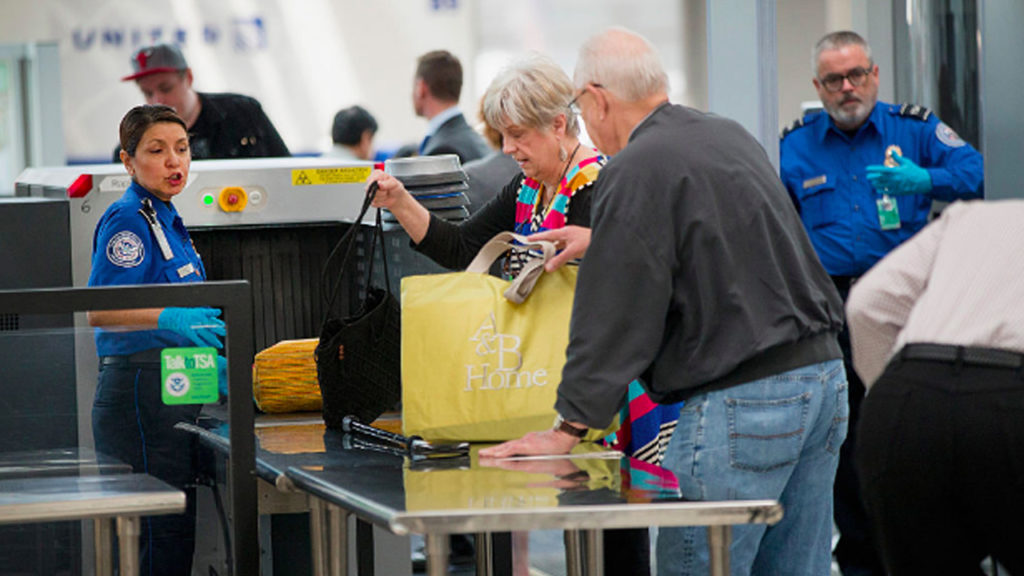 Have you heard of the blue flu sweeping the nation? Last Saturday about 5.6 percent of the 51,000 TSA, Transport Security Administration, officers called in sick, said the Federal Aviation Administration. Now, these workers are under no pay due to the government shutdown. Then on Monday, the New York Times published an opinion piece titled It’s Time for TSA Workers to Strike. It was penned by Barbara Ehrenreich and Gary Stevenson, and they wrote:

TSA agents, who are among the most visible of the affected workers due to the government shutdown, make do on a starting wage of about $23,000 a year. These situations can be higher, but the kind of decisions, the calculations that they have to make as a result of being not paid, is decisions such as keeping their children’s dentist appointments, pay the electric company or not, or try to get an extension on a utility bill, and go without getting the car fixed. These are the tough decisions they have to make.

Now joining us is one of the authors of that opinion piece, Mr. Stevenson. He is a labor union organizer for both the International Brotherhood of Teamsters and the American Federation of Teachers. Gary Stevenson, I thank you so much for joining us today.

SHARMINI PERIES: So Gary, let’s start off by you telling us about the blue flu. Why did 5.6 percent of TSA workers call in sick, and why are they so vulnerable when they are one of the most important functions that the government provides for our security at airports?

GARY STEVENSON: Well, first of all, their wages, to begin with, do not keep you pace with the standard of living in the areas that they’re living in. Imagine a lot of these workers working in large metropolitan areas like New York, Los Angeles Chicago or San Francisco. And imagine missing one paycheck with the pay level they receive. What that would mean for their rent their food their car insurance their health insurance. It’s pretty dramatic right at this moment. I would say these workers are on a path to financial ruin.

GARY STEVENSON: Well, that’s a very good question. And they are federal workers. And what Trump has done is he’s listed all federal workers on this sort of program of a wage freeze during this shutdown. And it’s a serious problem, because as you can see, it not only affects the TSA workers but affects the Coast Guard, who are the first in line to protect the borders of the United States at sea, it affects all sorts of Treasury workers, it affects all sorts of workers in the federal government who American citizens rely upon to provide essential services.

SHARMINI PERIES: Now, obviously this is in order to increase the figure in the country. People, obviously, when they feel insecure, they have a tendency to support the government in power. Do you think this is tactical in that sense, in terms of the political motivation behind this?

GARY STEVENSON: I think it’s completely politically motivated, it’s for one person’s private agenda. If anything, it is creating a national security crisis at the airports and in areas where the federal government is absolutely necessary to carry on the business of the United States. So it’s very, very serious.

SHARMINI PERIES: Not to mention that they feel so stranded. Let’s get into what the TSA workers do and the kind of training that they have to undergo to occupy these jobs, as well as the fact that these are highly trained people who have gone through huge security measures in terms of their clearance. A lot of them have very high level clearance and they have gone through very expensive processes to make sure that they are able to work at airports, protecting us on a day to day basis. The value of the work they do and the way in which they’re being treated as pawns in this government shutdown?

GARY STEVENSON: I think one of the things that everyone needs to understand here also is that even though these workers are being required to show up every day and not get paid, it also costs these workers a lot of money to go back and forth to work every day. It’s not like it costs nothing. And I think one of the reasons why we have these occasional sickouts is because basically, people can’t afford to leave the house because they don’t have the money to even get someplace. And so, it’s sort of an instinctual way of dealing with a very serious problem of the fact that there’s no money. And now, we’re approaching another week, very shortly, where another paycheck will come with zero dollars. I mean, at this point, it seems to me, a lot of households, a lot of working families are probably at their breaking point.

SHARMINI PERIES: And tell us about the union that represents these workers and what are they doing about the current situation?

GARY STEVENSON: Well, the American Federation of Government Employees has filed a major lawsuit in court, objecting to the fact that these workers are being used as political pawns and that really, it is a serious violation of labor rights because of the Fair Labor Standards Act. To require people to work and not get paid, this is one of the most primitive, outrageous assertions that anyone can make in this society, to require someone to show up to work and not get paid with some so-called promise of backpay somewhere down the line, maybe. And so, it goes against the grain of everything that this country stands for. People who go to work expect to be paid. If they’re not going to get paid, why should they go to work?

SHARMINI PERIES: So here, you and Barbara Ehrenreich is calling for the TSA workers to go on strike. Now, that could of course worsen the situation for average people that are trying to go places.

GARY STEVENSON: No, we’re not. What we’re doing is we’re entering the issue of a strike into a public discussion, is what we’re doing here. We’re not telling anybody to do anything, necessarily, that’s up to the workers themselves in terms of what actions they’re gonna take. But for the longest period of time, the idea of a strike has been the big elephant in the room here. And interestingly enough, finally, some of the major newscasters, for example on Morning Joe this morning, Mike Barnicle and Joe Meacham and Bob Costas arrived at the conclusion that probably the only way to end this shutdown is if airport workers went on strike and shut all the airports down. They came to that realization on Morning Joe this morning.

So it’s not a foreign thought or a new idea in terms of what the options are. What are the options for these workers? To continue into starvation and loss of home and loss of cars, repossession? Particularly when a president has indicated he’s willing to continue this for a year. Are these workers expected to show up and not get paid for a whole year? I mean, it seems like it’s off the wall.

SHARMINI PERIES: All right, Gary. We’ll keep an eye on this. And I hope to have you back. We’ll follow what happens next, and of course, provide the kind of coverage that is required in this kind of situation. I thank you so much for joining us.

The 1619 Project: A Nation Born in Contradiction, a Democracy Defined by Black Struggle