Bart Lubow: Structural racism plays a major role in which youth are arrested and go to jail

Bart Lubow: Structural racism plays a major role in which youth are arrested and go to jail 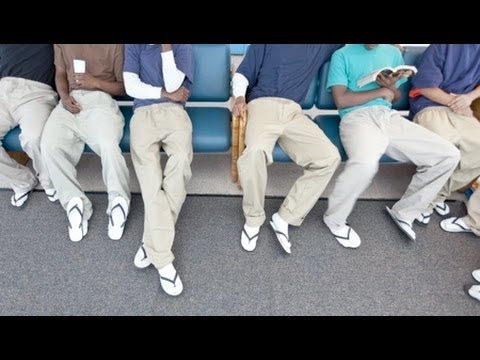 PAUL JAY, SENIOR EDITOR, TRNN: Welcome to The Real News Network. I’m Paul Jay in Baltimore. And we’re continuing our discussion with Bart Lubow about youth and the criminal justice system in America, and particularly in Baltimore. Bart is head of the Juvenile Justice Strategy Group at the Annie E. Casey Foundation in Baltimore. Thanks for joining us again.

JAY: So in an earlier interview, we talked about youth and the whole issue of zero tolerance and how taking kids out of school is a serious–as you said, a risk factor. But one of the things he mentioned was that–how this disproportionately affects black kids in the city. And how much is systemic racism a factor in all of this?

LUBOW: Well, I’m not exactly sure what you mean by systemic racism, but if you mean by it sort of structural racism, stuff that’s built into the laws and the culture and the resources and opportunities, as opposed to individual biases or prejudices, I would argue a huge amount factors into it.

JAY: What’s the evidence for that?

JAY: Or examples of that.

LUBOW: Well, for example, the research on delinquency reveals that pretty much all kids engage in delinquency. But if you look at who gets arrested, they’re disproportionately youth of color. And if you look at every other key decision in the juvenile justice system–whether to file formal charges, whether to divert, whether or not to convict, that is, to find the youth actually delinquent, and whether or not to incarcerate youth following a delinquency adjudication–the numbers all get worse the deeper you go into the system. Some of that has to do with structural phenomena. So, for example, if you have an underfunded, undertrained public defender staff, and virtually all of the kids are represented by public defenders, and those kids who are arrested are disproportionately youth of color, they’re going to have weak defenses and are going to face the greatest jeopardy from the legal process. If you have white middle-class kids whose parents can afford private attorneys who can devote the time and have the relationships to actually bring an individual case to a judge’s or a prosecutor’s attention, you’re going to get a better result.

JAY: How does it affect it in terms of police to kid on the street relations? When we’ve been preparing to do more and more work in Baltimore–and for those of you watching, if you haven’t guessed yet, we’re going to be doing a lot of stories on Baltimore–one of the things we hear from adults and kids is the amount of violence between young people and police–I guess depending who you talk to who gets blamed. But how much does that seem to have a sort of specific racial characteristic to it?

LUBOW: Well, I think it has a huge characteristic. I think, you know–and this is not necessarily to blame police or to say that they are, as an institution, biased, although there certainly would be a lot of people who would say that–if you look at police deployment practices, the police are going to deploy cops to the places where the most arrests or the most crimes are reported. Right? So in a place like Baltimore, the cops are being deployed in neighborhoods that are primarily African-American, low-income. Right? That’s where the 911 calls are coming from. That’s where the arrests are being made. So if you’re a police strategist dealing with a finite amount of resources, that’s where you’re going to deploy your cops. That’s going to mean that you’ve changed the odds of police-youth interaction substantially. If you layer on top of that policing policies or practices such as the ones that are in place in New York City now, this, you know, stop, question, and frisk sort of policy, and you apply that given the personnel deployment practices I just described, you’re going to increase the odds that police officers are going to have contact with youth of color and that that contact is not going to be pleasant, but that contact is going to be intrusive, it’s going to be based on a huge power imbalance, it’s going to take place between a kid and a cop who does not have much awareness of the impact of his interaction with an adolescent or much sensitivity about how adolescents perceive people in authority and understand their relationship to people in authority. So I think it’s huge.

JAY: I mean, the underlying issue is the structural fact that so much of urban poverty is black, and out of the urban poverty comes crime and desperation and all the other things. What could be done to address–?

LUBOW: That’s true, Paul, except the one thing that that doesn’t account for is the fact that the research on delinquency reveals that it’s a normative phenomenon in our society, meaning all kids, regardless of race, ethnicity, and even to a certain–a significant degree socioeconomic status, engage in delinquent behavior.

LUBOW: Absolutely. And the discretion built into the system, which was a good idea, means that certain kids are going to be treated differently because the law allows [them] to be treated differently. So when white middle-class kids get picked up by a police officer in possession of drugs or out joyriding or something like that, the discretion allows that cop to take the kid home and admonish the child in front of the parent. That may not be the same dynamic that’s operative when you live in a housing project that cops would just as soon avoid.

JAY: I mean, if you watch the TV show The Wire, you get the impression that downtown Baltimore and all the young black kids are all involved in selling heroin, essentially. But when I talk to kids here, they actually say a lot of if not most of the busts of, arrests of kids is actually for marijuana possession, things that, you know, you might be–get into detention in Baltimore for something you’ll get a traffic ticket for in California. I mean, how much is that the case?

LUBOW: My somewhat superficial understanding of the statistics from Baltimore would confirm that that is the case, that is, it’s far more common for kids to be arrested for simple possession of marijuana than it is for any other drug charge. You know, I also think it’s probably the case that the serious drug dealing that goes on in the streets of Baltimore is relatively sophisticated and difficult to police against. And so I don’t think–I mean, we have a large volume of distribution cases that we see in the juvenile court, but the impression that you got from The Wire is wildly exaggerated and overstated. It is much more common–and this is certainly true in New York City, where we now have detailed data from studies of this stop and frisk policy–that that’s what people are getting picked up for, having a roach in their pocket, or maybe even walking along the street and smoking a blunt and, you know, a cop car happens to roll up alongside them by coincidence.

JAY: There was a meeting of mayors, a national meeting of mayors in Baltimore a few months ago, and apparently a resolution was passed where the mayors all said the war on drugs has been a complete failure and there has to be a complete rethink on drug policy. What is the debate going on, or is there one going on in Baltimore, what a different type of drug policy might look? And what do you think it should look like?

LUBOW: Well, there hasn’t been a particularly open debate about a different drug policy for quite some time, and there’s a reason for that in Baltimore. We had a very popular mayor named Kurt Schmoke who had the nerve many years ago to urge a national debate about our drug policy and about decriminalizing drugs. And the common wisdom was that in the aftermath of that controversial position–and he didn’t take a personal position; he just said we should have a debate about this–that his political career outside or beyond Baltimore essentially was over. Now, he was a three-term mayor here and very popular and is a very distinguished man. All he was doing was suggesting a debate. And if he had higher aspirations than being mayor of Baltimore, the common wisdom was that did him in. So, you know, what is the policy here in Baltimore or the debate? Well, we go back and forth. We go from periods of very intensive efforts to eliminate sort of drug markets in the city through very broad enforcement, meaning, you know, we arrest anybody and everybody we can, to periods of time where the enforcement strategy attempts to be more targeted.

JAY: And how race-based is the enforcement strategy? Do you–I mean, do you find that black kids are getting more severe consequences of possession in other forms of drugs than white kids?

JAY: Other than being able to hire a better lawyer.

LUBOW: I don’t see a lot of white kids in the Baltimore juvenile justice system at all. So if you go over to the detention center today, you won’t find a white kid, I don’t believe. And if you look at the docket, court docket generally, you will not find large numbers of white kids. So one would–one could safely assume that it’s predominantly African-American kids who are being prosecuted on drug charges in Baltimore juvenile court.

JAY: And the black population of Baltimore is about, what, 63, 64 percent?

JAY: So there should be at least 30, 40 percent white kids in there.

Mr. Lubow worked for the New York City Legal Aid Societyâ€™s Criminal Defense Division and as director of Special Defender Services for Legal Aid, where he developed interventions and strategies to enhance representation in criminal cases. Mr. Lubow was named director of Alternatives to Incarceration for New York State and, during his tenure, 175 new…