In part two of our interview with investigative journalist Bruce Livesey, we discuss the violence in Ciudad Juarez. Livesey, recently returned from Mexico's murder capital, says that the Mexican military is showing evidence that it is supporting the Sinaloa Cartel in it's bid to take out the local Juarez Cartel for this key transportation corridor.

In part two of our interview with investigative journalist Bruce Livesey, we discuss the violence in Ciudad Juarez. Livesey, recently returned from Mexico's murder capital, says that the Mexican military is showing evidence that it is supporting the Sinaloa Cartel in it's bid to take out the local Juarez Cartel for this key transportation corridor. 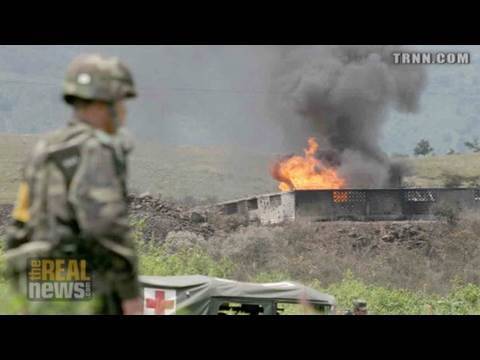 JESSE FREESTON, PRODUCER, TRNN: Welcome back to The Real News Network. I’m Jesse Freeston in Toronto with Bruce Livesey, who recently returned from Ciudad Juárez, which is one of the epicenters, really, of this playing out drug conflict in Mexico. When we left off, you were talking about the role that the Mexican army has played in the drug trade. If you could, elaborate a little bit more on that and talk about specifically what you saw in Juárez.

BRUCE LIVESEY, INVESTIGATIVE JOURNALIST: Sure. Juárez has become now the most dangerous city in the world. It’s—there, essentially, about 7 to 10 people are murdered every day. And the story that’s generally been told is that it’s a war between two drug cartels, so the Juárez drug cartel, which has been there for a long time, and the Sinaloan drug cartel, which is trying to move in. In early 2008, violence in Juárez sort of went from being sort of normal to escalating. In March of that year, the Calderón government sent the army in to essentially occupy Juárez. And then the violence got much worse and has continued to get much worse in spite of the army’s presence. So this seemed very counterintuitive. You know, what was going on? Why was the violence getting much worse? And what we discovered or what I discovered is that essentially the army has taken sides. They have sided with the Sinaloan drug cartel against the Juárez Cartel, and they are helping primarily the Sinaloans take out members of the Juárez Cartel. So, essentially, the assassins for each of the cartels are locked in this sort of deadly battle. But, essentially, the Sinaloans are winning, and they’re winning with the assistance of the Mexican army.

FREESTON: So one thing that some other people have pointed out that I’ve read, particularly in the Mexican press, was that while the justification for something like Plan Mérida, where the US is giving a little over $1 billion a year to help the Mexican army, is justified from the perspective that the Mexican army is undermanned or under-armed against these drug cartels, that the drug cartels are more powerful and have better weaponry and things like this, well, at the same time we’re not really seeing many casualties in the Mexican military, are we? And so maybe talk about that.

LIVESEY: The odd skirmish occurs. But again the question is, you know, is the skirmish occurring because the Mexican army is taking on, again, some elements of the drug cartel on behalf of another cartel? And what we saw in Juárez was that the army essentially was playing this role of doing nothing. They would sort of show up after the murders. And there was evidence that they were clearly helping the assassins of the Sinaloan Cartel do their business. So in Juárez the evidence is essentially their role was just to kind of drive around in circles and allow and/or help the Sinaloans take out the Juárez Cartel.

FREESTON: Who were the victims of these murders?

LIVESEY: Well, again, another complicating factor, especially in Juárez, is that what’s occurred in the last few years is that Juárez has become a market for drugs, so the amount of addicted Mexicans has also exploded. So there are two things happening in Juárez. There is the Sinaloans trying to take out the leadership and foot soldiers of the cartels. They’re also taking out the street dealers of competing gangs who sell drugs in Juárez. And you have things that just don’t—in that respect, where they’ve gone into drug clinics, so clinics that are being set up to get people off drugs, and they’ve massacred the addicts, and in order to send a message: don’t get off the drugs. The other thing that’s clearly happened is there’s a lot of innocent bystanders getting killed. There’s enormous industry and shakedown rackets. So they’re going into businesses and to homes and they’re basically demanding money from people, and if they don’t pay, they shoot them. So, like, the violence is, like, on about three or four levels: there’s, you know, what—the army killing people; there’s the cartels killing cartel members; there’s cartel members taking out, you know, neighborhood people who are not paying or businesses who are not paying, essentially, graft.

LIVESEY: It’s hard to. We—and that was the question we asked. We said, how—what we were told was that it definitely goes up to the level of the district commander. So the regional commanders are in on it, because the commanders would change, but the Mexican army’s role would not change. What we were told was generally—is the corruption occurs at a somewhat regional level. So once the army moved into a region, the drug cartels essentially would cut a deal with the army commanders. But whether it goes all the way up to the generals who report to Calderón, we don’t know.

FREESTON: Well, there’s also—you know, the political leadership, both not only in Mexico but in the US, must be aware of this at this point. I mean, the US has DEA [Drug Enforcement Administration] agents on the ground there as well. I mean, is there any recognition that this is going on, any acknowledgment?

LIVESEY: We spent some time trying to ascertain that, and we felt that, yes, there are elements of the DEA in particular and aspects of the American government who believe this to be true. The problem is that they have drunk the Kool-Aid, you know, that for political reasons it is not good politics in America to suggest that they are funding an organization, which is the Mexican army, that essentially is working for drug cartels, even if they think it might be going on. They essentially put blinkers up in that respect. So we discovered that, yes, there are elements of the intelligence community in the United States who are aware of this, but that it is politically, you know, problematic, if you’re in those institutions, to begin questioning your masters. And that’s really what’s happened.

FREESTON: Alright, Bruce. Well, thank you very much for your time.

FREESTON: And will you be heading back to Mexico any time soon?

LIVESEY: I’m going back to Texas to do a story some time later this year, somewhat related to the drug trade, yeah.

FREESTON: Well, hopefully we can talk to you again after that.

FREESTON: Thanks for joining us on The Real News Network.

Bruce Livesey is an award-winning investigative journalist and the lead investigative reporter for the National Observer. His writing has appeared in most major magazines and newspapers in Canada, including The Globe and Mail, Report on Business Magazine, National Post, Toronto Star, The Gazette, The Walrus, Canadian Business, Canadian Lawyer and The Financial Post. Livesey also…