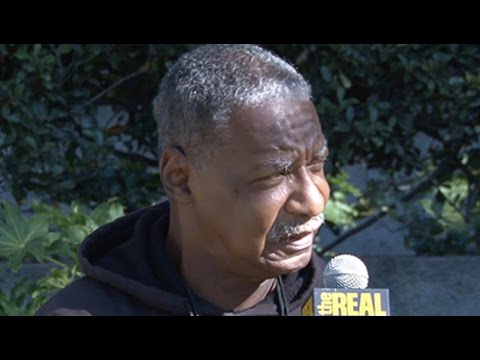 T.M. SCRUGGS: I’m T.M. Scruggs, with The Real News Network, here with Eddie Conway, who has come out for the 50th anniversary of the Black Panthers, here at the Oakland Museum of California, and at some other sites, as well. So, you’re seeing some people that you haven’t seen for quite a while, right?

EDDIE CONWAY: Yes, I’ve seen a lot of people that I never got the opportunity to see at all, because people obviously came from all over the country, and some people even came from around the world. But some of the key people that had taken time to come and visit me while I was in prison or corresponded with me or met me and supported me when I got out, I kind of, have been interacting with them, and there’s quite a few of them here.

So, it’s good, but at the same time, it’s kind of sad because I know that there’s a tremendous amount of people still left behind the walls, and so to some degree, political prisoners that are freed have something called survivor’s guilt, you know? The people that you leave behind, you want to try to figure out how to do something to help them out.

T.M. SCRUGGS: Well, that was the theme of the panel you were just on, was about the political prisoners and that they do exist here and what we can do to help raise consciousness and do what could be possible to get people out. And one of the things that all the people on the panel stressed was how important solidarity was with people outside the prisons. Can you tell us some of the things…? I was impressed by when they were talking about getting a fund for the commissaries out of prison, and I think a lot of people don’t even know what that is. Can you tell us something about that?

EDDIE CONWAY: Yes, I think one of the things that helps – I mean, when you’re in prison you are in a state of slavery, and you only make a few cents an hour in most cases, a couple of dollars a week, or a couple of dollars a day, whatever. You never make enough to take care of yourself, to get toothpaste, to get soap, to get hygiene, to get stamps to write home. To even have the luxury of having a soda or a cake or something like that. You don’t get it, and none of that’s provided for you.

T.M. SCRUGGS: They don’t give you toothpaste and soap?

EDDIE CONWAY: Only if you have no money at all, and then you get what’s known as a welfare package, but as soon as you get money in your account, they charge you for that.

EDDIE CONWAY: So you end up being broke again, right? So, commissary is a store that prisoners can use and you need to have money from outside and that helps. That’s a tremendous help when prisoners have money they can go to store, they can buy the things that they need. Or, say if it’s a card for their son or their daughter for a birthday, you can’t get that for free, so you need money to do that. And that helps you continue to bond with your family, but it also helps you feel like you have some power over your conditions.

T.M. SCRUGGS: Yeah, right. So, looking at the people in the audience, I’m noticing that there’s a lot of folks you can see would be part of the original Panthers, in their 60s now, getting into their 70s. And then there are some younger folks, who tend to be fairly young. We saw the high school kids who came in and some other people in their 20s, and what’s a little noticeable is that there’s not nearly as many people who are more in their 40s or 50s, unless they’re directly in a family where an older member was in the Panthers. In that sense, it looks like Quentapro(?) had a certain level of success in stopping the Panthers from expanding.

T.M. SCRUGGS: That’s right. You know, you see that, even in the white community, where you go to demonstrations and you have older folks who got radicalized by the Vietnam War, and Black Power and the Women’s Movement, and then there’s a substantial gap. And then you have people who got involved with the 1% Movement, and so on. So it’s kind of replicated throughout the country. Has there been any talk within the Panthers of trying to revitalize the party, to… and try to make it… reach a new generation as the Black Panther Party? Can you comment on that?

EDDIE CONWAY: No. And I don’t think it’s advisable because each era has its own particular culture, its own particular contradictions and its own particular enthusiasm to make changes and you can’t duplicate 50 years later something that we did or addressed the issues and the problems that existed during the time we felt that they needed to be addressed. Young people have to kind of find their own niche in terms of what kind of apparatuses they’re going to develop, or what are the issues for them. They have a lot more attention in relationship, the gender rights and other kinds of issues, environmental issues, that while we supported at that time, people are now more fully engaged in those kind of things. And so the organizations and the apparatus and the type of organization is important also. The kind of organizations we created at that time, which was hierarchal and with top leaders and top commanders, and all the way down to the ground, to the foot soldiers, those kind of organizations are more susceptible to being attacked and being destroyed by government programs, by picking off the leaders. Now, horizontal organizational structures need to be made where everybody is a leader. You know. And everybody can’t be a leader, but everybody needs to learn to develop the leadership skills and they need to network across the board, so that if you take one part of the organization away, the rest of the organization don’t stop.

T.M. SCRUGGS: Well, we’re still in the middle of the conference here, so it’s not over. But what you have seen already, are there some things that you picked up on that, you know, you… where we walked away for a while, and is there something you learned about the Party or the movement that you weren’t aware of before you came out here for this conference?

EDDIE CONWAY: No. I did my thesis on the Black Panther Party, and so I studied extensively, read a lot of the material that existed up to the early 2000s – I haven’t read anything since then. But pretty much, I know the dirty laundry as well as the goals and objectives and the things that we did that ended up being very successful. And I also understood the things that we did that led to our demise with the help and encouragement of government programs and informers and provocateurs.

T.M. SCRUGGS: Well, one thing that the Panthers can pass on is the example of dedication that they had, and it was really impressive to see the high school students in here today who were very tuned in to the issues that were brought up, and when certain things were talked about, boy, they were sitting right in front of me and they immediately responded. I know you yourself have written a book about your own life, and so on. It looks like one of, exactly like these events that are so important for the Panthers themselves, to be able to try and cast what is their legacy so that when it goes down into the future, they will have the chance to write it as much as possible, instead of someone from the outside.

EDDIE CONWAY: Yes. Well, what I find is that there is a great thirst of knowledge among this generation that’s now approaching high school and college age. They’re seeking a lot of information, but there’s a tremendous amount of books and literature out there, and films being made, and it’s a constant compilation of information on the Panthers that’s being spread, disseminated, throughout the communities, the mass media, and so on.

So, I think that example is there. People are studying it. But I always try to encourage people my age – I’m 70 now – to listen, as well as advise, because we need to also learn and we need to hear what those issues are, too, but at the same time we can share our experience and our wisdom.

T.M. SCRUGGS: Thank you, Eddie. For The Real News Network, this is T.M. Scruggs in Oakland.