Why Turkey Wants Normalization with Israel 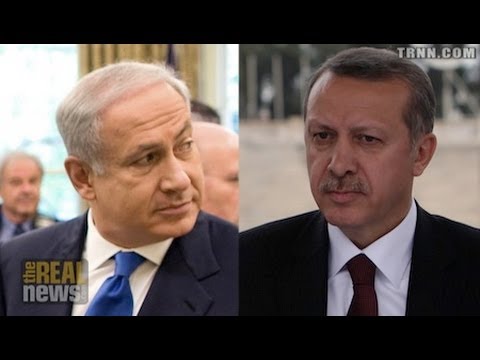 We’re continuing our interview with Baris Karaagac about the developments in Turkey. In part one we talked about the Kurdish deal with the Turkish state, and now we’re going to talk about the phone call of Prime Minister Netanyahu with the prime minister of Turkey.

Now joining us from Toronto is Baris Karaagac. He’s a lecturer in international development studies at Trent University in Ontario.

JAY: Alright. So a lot of moves, all within a couple of days–March 21 the deal with the Kurds; March 22, Netanyahu phones Erdogan, the prime minister of Turkey. So tell us a bit about the phone call, and then let’s get into what it all means.

KARAAGAC: Well, the relations between Turkey and Israel had been quite sour since the flotilla incident of 2010, when the IDF, you know, attacked the flotilla and killed nine Turkish citizens, one of them being a Turkish American. After the flotilla, Turkey, in order to normalize relations, had three conditions from Israel, from the Israeli state. So Turkey wanted an apology, an official apology. Secondly, it wanted compensation for those people who were killed during that attack. And third, Turkey wanted an end to the blockade on Gaza. So those–and then Turkey froze on the military agreements that had been in effect–not canceled, but froze those military agreements. But at the same time, you know, trade relations, trade continued, and to some extent tourism continued, although it was hit quite hard.

And the interesting thing is that only a month ago, at the Vienna convention of the United Nations, Erdogan, the Turkish prime minister, equated Zionism with fascism. And, you know, this showed that relations were still quite sour and normalization was not anywhere near.

But then, one day after this new phase, when it comes to the Kurdish issue on Friday last week in the presence of Barack Obama, the American president, Netanyahu officially, through a phone call, apologized to the Turkish prime minister, Erdogan. And Netanyahu also agreed to pay compensation for the people who got killed during the attack, and then partially lifts the blockade on Gaza when it comes to goods going to civilians.

JAY: The first two, although are more symbolic, I guess, the compensation is not going to cost Israel very much. Netanyahu eats a little crow on the apology. But on the third, to actually promise to lift the siege of Gaza, it’s hard to believe he means that.

KARAAGAC: Well, many people are skeptical, especially many Arabs are quite skeptical.

By the way, I have to emphasize that this was greeted as a huge diplomatic victory in Turkey, and especially the media that is close to the AKP government congratulated Turkish foreign policy, but above all the foreign minister and Erdogan for this great victory. But then when we look at the Arab world, people are quite skeptical. Yes, Netanyahu gave this promise, but they’re not quite sure as to whether or not he’s going to keep it.

JAY: So it’s hard to believe–and here I’m going to enter speculation, but it’s hard to believe this isn’t to a large extent about Syria, that the United States, Israel, and Turkey, all these countries, and the Saudis, the Qataris, and everybody who’s playing in this deadly game in Syria, including Russia and Iran, but it’s hard to believe this isn’t about controlling the outcome of what’s taking place in Syria, because the Syrian opposition’s in complete disarray. They elected this new prime minister, I think, of the government in exile, and he’s already quit, and I think the president quit. and the people fighting on the ground are saying they reject this whole foreign coalition of Syrians. So it’s a complete mess, and the only country you can imagine that if it’s going to come to some kind of military intervention that might intervene is Turkey. And so, I mean, is this about getting Turkey’s house in order, getting Turkey’s leader as much prestige, because he can say, oh, look, I made the Israelis eat crow? And then what?

So Syria is a very, very important factor. And when you look at the discourses of both Netanyahu and Ya’alon, the defense minister of Israel, they are very frank about it. They said, no, it has a lot to do with Syria; we need Turkish cooperation because there’s this perception of increasing insecurity. There are so many unknowns, there’s so much uncertainty, and Israel wants an ally that it can depend on, rely on. So Syria is one thing.

And another factor of course must be Iran. The audience knows Turkey agreed to hosting the missile shield in its eastern border with Iran. And, you know, this was supposed to be for security reasons, to defend Europe, but everyone knows that this is directed against Iran if it decides to attack Israel, right?

And thirdly, the third factor is of course American pressure. Americans want this cooperation. They’re okay with low doses of tension between these two key allies, but this was too much for them, and they need the cooperation of these allies in the Middle East, especially when it comes to, first, Syria, and then Iran.

JAY: And would Turkish public opinion accept Turkey in alliance with an Israel that attacked Iran?

KARAAGAC: This raises a huge moral question, an issue for both the AKP government and for Turkish public. We’re talking about a prime minister who referred to Israel as a terrorist state and, you know, who championed Palestinian people and their cause.

JAY: And this was very popular in Turkey when he said these things.

KARAAGAC: Absolutely. And he became quite popular among many Arabs, too.

But now the aim, the goal is to normalize relations with a Zionist regime that has killed so many innocent lives and that has been quite repressive.

But on the other hand, the Turkish government, these guys are public relations geniuses. They’re very good at marketing even this issue, which can be morally so problematic.

JAY: So is Turkey in a position, if it came to it, where they could actually militarily intervene in Syria and actually control who comes to power there?

KARAAGAC: Well, I think they might let this conflict go on for some time, but they would do their best to determine the outcome, that’s for sure.

JAY: And with the opposition in such disarray–I mean, now we’re talking about Syria–I mean, is there any sense that Assad is going anytime soon? Does this just go on for years like this?

KARAAGAC: As far as I know, the Assad regime will do everything it can to defend the regime. But this is also supported by minorities within Syria, because these minorities are quite concerned, worried, that if the regime collapses, there might be revanchist attacks against them. So they are doing everything they can to protect the regime. But I don’t know how long the regime can do this, continue to do this.

JAY: Okay. So just any sort of final word on the significance of all these events in Turkey on the region?

KARAAGAC: I looked at the Israeli side in terms of this rapprochement between the Israeli and Turkish state, you know, that started last week, but also we need to look at why the Turkish state agreed or accepted this apology. First of all, of course it has a lot to do with the Syrian conflict. The Turkish state, as I said, and as you said very clearly, is deeply involved in this conflict, and they’re a major actor there cooperating with, you know, Europeans, with the United States and the Gulf states. And they want to be able to, as, you know, a part of this coalition, determine the outcome. And here cooperation with Israel would be crucial.

And secondly, this action, I think, has proved to a great extent that what we’ve seen since 2010, the flotilla accident, and maybe since 2008, 2009, it’s not a rupture when it comes to the alliance between or the cooperation between Israel and Turkey. So both of these countries were responding to domestic demands or the domestic audience, the electorate, and they acted this way. But it shows that the alliance’s cooperation continues. Even during this period, between 2009 and 2012, the trade volume between the two countries increased from 2006, $2.6 billion, to $4.4 billion.

And, of course, even 15 months ago, when, if we remember, there was an attack on these Kurdish smugglers, civilians, on the Syrian and Turkish border, where more than 30 innocent civilians were killed by the Turkish military, by jet fighters–and the surveillance during that attack, before the attack, was done by Heron unmanned aircrafts that had been purchased from Israel. So normalization of relations means that there will be maybe even more military cooperation–or at least, you know, that there will be military cooperation within these two countries, and which is morally and politically very, very problematic in the region.

Another important issue is that when it comes to Israeli and Turkish relations–and especially some capital groups within Turkey are quite supportive of this–when we look at–well, let’s take Zorlu conglomerate, the holding company. Only this conglomerate by itself has investments that are more than $1 billion in Israel. And there are now attempts to bring eastern Mediterranean gas to Turkey. And these are significant projects. So such rapprochement would make these things much easier.

JAY: Thanks very much for joining us, Baris.