Baris Karaagac: Turkish leadership dreams of a new Ottoman empire and looks to control the Kurds

Baris Karaagac: Turkish leadership dreams of a new Ottoman empire and looks to control the Kurds 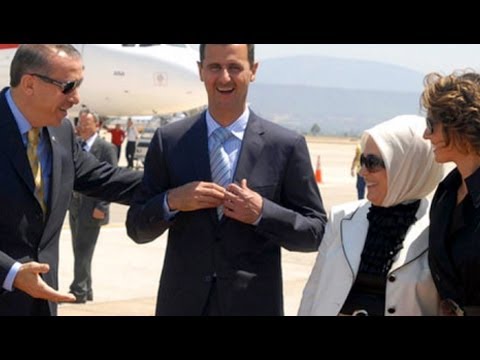 The conflict in Syria continues to shed rivers of blood. Tens of thousands of people have been killed in a bloody war between a brutal dictatorship and opposition movement, many of whom are backed by other brutal dictatorships, specifically Qatar and Saudi Arabia. It’s a very complicated and very tragic situation.

One of the main players in the situation in Syria is Turkey. And now joining us to talk about Turkish foreign policy and what their agenda is as regards to Syria is now joining us, Baris Karaagac. He’s a lecturer in international development studies at Trent University in Ontario. He’s also the editor of the book Accumulations, Crisis, and Struggles: Capital and Labour in Contemporary Capitalism. And he joins us from our studio in Toronto. Thanks for joining us, Baris.

JAY: So what are Turkish objectives in Syria? We know, as far as I understand it, Turkey has been involved from very early stages. We’ve been told they set up major refugee camps in Turkey before there were very many refugees. They seem to have been in on a kind of plan with Qatar and Saudi Arabia. Is that correct? And what do they want?

KARAAGAC: Yes, there are many refugees, but there are also many rebels right now within Turkey, and Turkey has been providing them with a lot of logistical support. And of course some of it comes from Saudi Arabia and Qatar.

But firstly I would like to talk about the historical relations between those two countries. And until 1998, the relations were quite stormy, actually, becauseâ€”due to mostly three reasons, factors.

One of them is the status of Hatay, a southern province that neighbors Syria which joined Turkey in 1939. And Syria has always claimed that it’s historically a part of Syria. And the majority of people living there are Arabs.

The second is the conflict over water, the two rivers, Euphrates and Tigris. And this has been a major source of conflict between the two countries.

And a third one was the support that was given by the Syrian government, the Syrian state, to the PKK. But in 1998, Syria, due to a lot of pressure from both Turkey and the international community, had to kick Abdullah Ã–calan, the leader of the PKK, out of Syria. And this started a process of friendly relations. And when Hafez’s son died, actually, the president of the Turkish state, republic, went to Syria to attend the funeral, and a Turkish president has not been to Syria in a very long time.

But these relations got even better during the government of the AKP. And until trouble started in 2011, the relations between those two countries can be considered brotherlyâ€”I’m using the word on purpose because ErdoÄŸan and Bashir al-Assad used to call each other brothers, and until two years ago, or only two years ago, those two people were making vacation plans together. But with the events, with the insurgency as a part of the Arab Spring in 2011, these relations have started to deteriorate, and at a very fast pace.

And when scholars, when analysts look at the causes of the deterioration, many people speculate. And it is actually very difficult to say something definitive, but I think what happened is that the Turkish state, the Turkish government, the AKP, was not expecting this to happen in Syria. And when it started to happenâ€”.

JAY: Hold on. “This” meaning the uprising against Assad.

JAY: Now, this was toâ€”you know, once things got militarizedâ€”and some people are suggesting one of the reasons it got militarized so early was first of all because Assad used terrible violence against peaceful protesters. But then Qatar and Saudi Arabia, and to some extent the Americansâ€”although it seems to me it was more Qatar and Saudi Arabia that drove thisâ€”saw an opportunity and helped get this thing militarized more quickly than it might have otherwise. But where was Turkey in that scenario?

KARAAGAC: Well, Turkeyâ€”first, I think they hesitated in terms of what to do. And then they bet on the rebels in terms of these people, this really diverse group of people who rebelled against the Syrian government to win in the end. And then Turkey jumped on board and started to support the rebels alongside Qatar and Saudi Arabia and, of course, the United States.

JAY: Now, is this partly to do with competition between Turkey and Qatar and Saudi Arabia, that Turkey didn’t want the Saudis and the Qataris controlling the outcome of a Syrian revolution, that Turkey needed to have its hand there?

KARAAGAC: Well, I think we should locate this within a broader discussion of the shift in foreign-policy strategy in Turkey in the past ten years. Many people have given it different names, but I would like to call it the new [‘[email protected]]. This idea of new [‘[email protected]], which actually promotes greater engagements in those territories that used to be controlled by the Ottoman Empire, by the Turkish state today, is not a new idea. It was firstâ€”it became popular with Turgot Ã–zal, who used to be, first, the prime minister, and then the president, in the 1980s. But it was not until the AKP government that it started to be implemented.

So Turkey was seeking a leadership role in those territories which used to be controlled by the Ottoman Empire for centuries. And I think thisâ€”again, the question that you posed should be located within that context.

JAY: Well, to what extent, then, is Qatar, Saudi Arabia, and Turkey kind of co-managing the region under the American umbrella? Or are we going to be seeing a rivalry in Syria to start with, even with Turkey versus Qatar and Saudi Arabia? We’ve talked about how much Syria is a proxy war not just for Saudi Arabia and Qatar, but also the United States and Russia, and even China to some extent. What is Turkey’s role in this proxy war? They’re clearly one of the most affected, given the border, that they’re right on the border.

KARAAGAC: I think we should be looking at this question at a much higher level, at the Eurasian level. I think there’s a struggle for hegemony, influence and hegemony in the broader Eurasian territory/geography, and we have Russia and China on the one hand, and we have the United States and its allies on the other. I don’t seeâ€”I don’t foresee a serious conflict between Turkey on the one hand and Qatar and Saudi Arabia on the other. I think this is part of this struggle over, particularly, energy resources in Eurasia between those two blocs. And Turkey definitely sided with the United States and its allies in the region.

JAY: I mean, that’s, I guess, what’s really at the heart of my question is what has emerged is Qatari, Saudi, Turkey as sort of the managers of the American sphere of influence, or partners, if you want, in the Middle East, in alliance alsoâ€”and making use of the Muslim Brotherhood, first of all in Egypt with Morsi. And are they also trying to bring to power Muslim Brotherhood in Syria?

KARAAGAC: Yes, there, definitely. So there’s someâ€”definitely I think there’s some subcontracting going on there. But at the same time, I’m not [incompr.] give you [incompr.] analysis which see the United States or this imperial power as only important which determines the outcomes of any political process around the world. I think in this case what we observe in Turkey is that the interests of the United States are overlapping with the interests of a group of or a part of Turkish society.

Again, this has a lot to do with the internal dynamics and internal transformation of Turkey in the last 30 years. Turkey today is not the Turkey of the 1970s or 1980s. Turkey’s much more confident. And particularly when we look at the Turkish capital today, Turkish capital has been investing over a territory extending from Siberia to Sub-Saharan Africa to Latin America. And these people, they want much confident, as well as much powerful, assertive foreign policy by the Turkish state in the Middle East or in Eurasia today.

And the second thing is, of course, we cannot talk about these issues without one very important actor in the Middle East, and that is Iran.

JAY: Before we get into Turkey and Iran, the situation in Syria is so tragic, there have been so many people killed, one would think Turkey could have and still could, in fact, play a role to find a somewhat more peaceful, less drastic transition or resolution in Syria. But Turkey doesn’t seem to be playing that role. They seem to actually be putting fuel on the fire.

KARAAGAC: Turkey has been definitely putting fuel on the fire. And, actually, I don’t think that Turkey got into the Syrian conflict without U.S. encouragement in the first place. But it even went beyond whatâ€”Turkey went beyond what the United States was expecting it to do. And even the Americans started to warn Turkey not to get involved too much in the conflict.

But right now, Turkey is pretty much in there. It’s one of the most active and assertive players in the Syrian conflict. And of course a part of it is related to the Kurdish question. Turkey is really afraid that the Kurds in the north part of Syriaâ€”there are about 2Â million Kurds; they’re constituting 9Â percent of the Syrian populationâ€”Turkey is really afraid that they will achieve autonomy and preserve it, and maybe eventually unite with the other parts of Kurdistan.

JAY: So the issue now for Turkey is overthrow Assad, and then, hopefully, a Muslim Brotherhood government comes to power and suppresses the Kurds in Syria?

KARAAGAC: Keep them under control, definitely. They would like to keep the Kurdish movement and the Kurdish territories under control as much as they can. And in this case, of course, if the Muslim Brotherhood comes to power, the Muslim Brotherhood is insisting on an Arab republic. So they are not so interested. You know, I don’t think that they would agree with most of the demands by the Kurdish population in Syria. So Turkey would prefer that option.

JAY: Alright. Thanks very much for joining us. We’ll continue this series of discussions about Turkey with Baris in further interviews on The Real News Network.

Don’t forget we’re in our year-end fundraising campaign. There’s a Donate button over here. Every dollar you donate gets matched. If you don’t click on that, we can’t do this.